Boeing's 737 MAX: These nations opted to ground the aircraft

Singapore has suspended operations of all Boeing 737 MAX aircraft in and out of Changi airport on Tuesday, while and Indonesia and China too grounded their fleets of the US planemaker`s latest model. 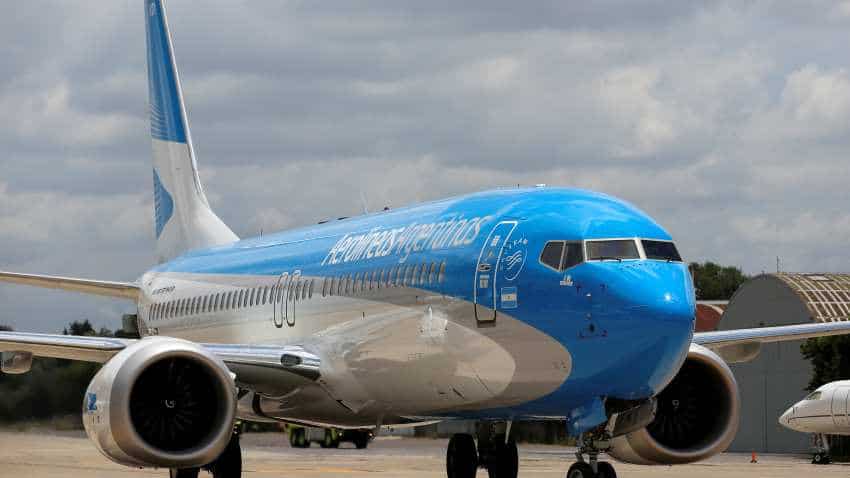 Among other nations which have also expressed their desire to ground the operations include South Korea, Australia and Argentina. Image source: Reuters
Written By: ZeeBiz WebTeam
RELATED NEWS

Boeing's 737 MAX: In the wake of an Ethiopian Airlines jetliner's crash that killed 157 people, a number of countries have grounded Boeing's 737 MAX 8 medium plane. Currently, there are as many as 350 of the 737 MAX 8 planes in service across the world. Some countries and airlines have opted to ground the planes, while others are continuing to fly the aircraft pending an investigation into the Ethiopian Airlines crash.

The countries which recently suspended operations of all Boeing 737 MAX aircraft include Singapore, Indonesia and China grounded their fleets of the US planemaker`s latest model after it suffered a second fatal crash in less than five months. Among other nations which have also expressed their desire to ground the operations include South Korea, Australia and Argentina, according to reports.

According to Reuters report, Singapore has suspended operations of all Boeing 737 MAX aircraft in and out of Changi airport on Tuesday, while and Indonesia and China too grounded their fleets of the US planemaker`s latest model.

A day after a Ethiopian Airlines passenger jet plunged to the ground, killing all 157 people aboard, the United States stressed it was safe to fly the planes, but Singapore`s Civil Aviation Authority (CAAS) statement showed question-marks hanging over the aircraft, said the report, while quoting the aviation regulator as saying, "During the temporary suspension, CAAS will gather more information and review the safety risk associated with the continued operation of the Boeing 737 MAX aircraft into and out of Singapore."

According to the report, other airlines that operate Boeing 737 MAX aircraft to Singapore - China Southern Airlines, Garuda Indonesia, Shandong Airlines and Thai Lion Air - have also been affected. Singapore's Changi Airport reportedly said that Shandong had cancelled its flight to and from Jinan but other airlines had replaced the jet with another type.

On Monday, China has ordered its airlines to suspend the use of their 737 MAX 8 jets, said Reuters, citing the country`s aviation regulator as saying it would notify airlines when they could resume flying the jets, after contacting Boeing and the FAA.

Major airlines from North America to the Middle East kept flying the 737 MAX on Monday, though Canadian Transport Minister Marc Garneau reportedly said that he would not hesitate to take action once the cause of the crash is known.

However, India`s regulator has ordered additional maintenance checks on 737 MAX 8 aircraft operating in the country and said a review found "no significant concern", Reuters report said.

A South Korean airline says it will suspend operations of its two Boeing 737 Max 8 planes, an AP report said, citing an Eastar Jet official as stating that the planes will be replaced by Boeing 737-800 planes from Wednesday on routes to Japan and Thailand.

The scare has wiped billions of dollars off the market value of the world`s biggest planemaker, as the Boeing Co share closed 5 percent down on Monday, having fallen by as much as 13.5 percent at one point.

The US Federal Aviation Administration (FAA) issued a "continued airworthiness notification" for the 737 MAX late on Monday to assure operators, and detailed a series of design changes mandated by Boeing, said Reuters report.

Meanwhile, Boeing has issued a statement saying it had been working with the FAA in the aftermath of a Lion Air crash to develop enhancements to flight control software that will be deployed across the 737 MAX fleet in coming weeks.

According to Reuters, the new MAX 8 variant of the 737, the world`s best-selling modern passenger aircraft, has bigger engines designed to use less fuel. It entered service in 2017, and by the end of January Boeing had delivered 350 of the new jets to customers.