Warren Buffett continued to grace the third spot on Billionaires Index with $82 billion as of Monday, while Mark Zuckerberg's real-time net worth stood at $81.4 billion 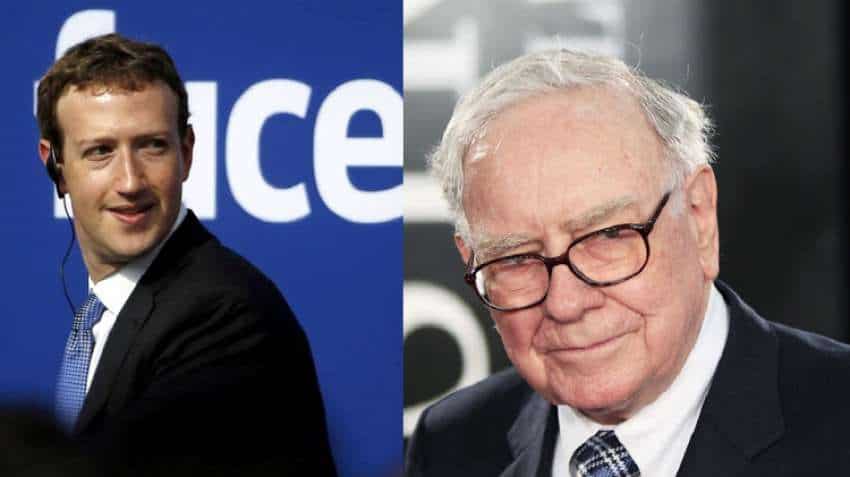 Warren Buffett is slipping on the index in the wake of his philanthropic activities. Image source: Reuters
Written By: ZeeBiz WebTeam
RELATED NEWS

What problems? Facebook chief Mark Zuckerberg wealth is actually soaring fast and he is threatening to dislodge none other than the legendary boss of Berkshire Hathaway, Warren Buffett. Despite a recent data privacy leak crisis, Facebook owner Mark Zuckerberg's stars are shining bright. Zuckerberg wealth rose so much that he was just on the brink of elbowing out Warren Buffett as the world’s third-richest person. According to Bloomberg Billionaires Index, the gap between the two billionaires' net worth was only $29 million last week on Wednesday.

Zuckerberg's real-time net worth stood at $81.4 billion as of Monday, while Buffett continued to grace the third spot on Billionaires Index with $82 billion. Facebook share price hit a recent low of $157.20 on April 2 on the back of the Cambridge Analytica privacy scandal. The scandal surfaced after reports came that Facebook improperly shared personal information of 87 million Facebook users worldover.

However, soon the stock recovered lost ground to reclaim its crucial $200 mark. If Facebook share price managed to maintain its uptrend, Zuckerberg may soon be able to beat Warren Buffett as the third richest man after Jeff Bezos ($142 billion) and Bill Gates ($93.2 billion).

Sanderson is so bullish on Facebook that he believes the European Union's General Data Protection Regulation (GDPR) will be a tailwind for the company.

"Facebook, along with Alphabet, is better positioned to comply with GDPR standards because they have less dependence on third-party data, and this could enhance the company's relative position and further consolidate ad revenue share," the report added, quoting Sanderson.

Meanwhile, Warren Buffett, the chairman and largest shareholder of Berkshire Hathaway, is slipping on the index in the wake of his philanthropic activities. In 2010, Buffett launched The Giving Pledge initiative with Microsoft co-founder Bill Gates. The pair want to inspire billionaires around the world to give the majority of their wealth to charity.

The daily ranking of billionaire net worth on Bloomberg Billionaires Index is updated each day at the end of the trading day in New York.