​World's richest man Jeff Bezos has landed back on Earth after successfully completing the first-ever unpiloted suborbital flight that made history with the youngest and oldest person to space. 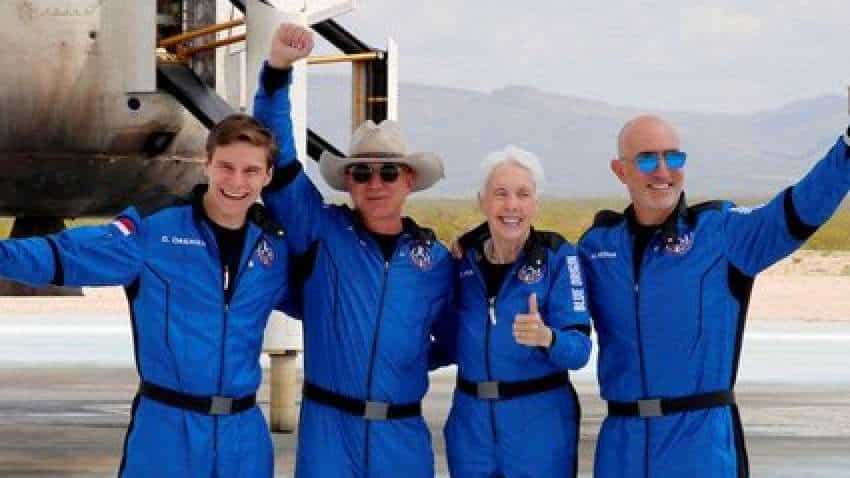 "The experience is huge for space exploration," Bezos said: Reuters

World's richest man Jeff Bezos has landed back on Earth after successfully completing the first-ever unpiloted suborbital flight that made history with the youngest and oldest person to space.

Bezos flew beyond the Karman line -- 100 kms above the ground and the internationally recognised boundary of space -- on board his company Blue Origin's fully automated and reusable New Shepard rocket. The mission lasted 10 minutes and 10 seconds.

He was accompanied by his brother Mark, 82-year-old female aviator Wally Funk and an 18-year-old physics student Oliver Daemen, from the Netherlands, on the first human flight of the New Shepard rocket, NS-16, which launched from Launch Site One in West Texas a little over 9 a.m. EDT (6.30 p.m. IST).

"Amazing, I don't know how to put it into words, it was peaceful and calm," he told CNN's Anderson Cooper after his flight.

"The experience is huge for space exploration," Bezos said, adding "Blue Origin's mission is to build roads to space for future generations.

"We should protect Earth and push heavy industries out of Earth and safeguard it. It's going to take many decades though."A

"Booster touchdown! Third successful landing for this rocket and the first to carry four private citizens to space above the Karman Line," Blue Origin shared in a tweet.

The five-story-tall New Shepard rocket, named after the first American in space Alan Shepard, is designed to launch a crew capsule with seats for six roughly 340,000 feet into the sky toward the edge of space. The booster is topped by a gumdrop-shaped Crew Capsule with space for six passengers inside and large windows.

After reaching the Karman line, the capsule detached from the booster, allowing those inside to view the curvature of the earth and experience weightlessness. The booster and capsule then landed separately, with the capsule landing in the west Texas desert with the help of parachutes.

"Congratulations to the @BlueOrigin team on the first human flight of #NewShepard! We look forward to future flights with researchers and NASA-supported technology payloads aboard," US Space agency NASA tweeted.

Bezos' flight follows Richard Branson's flight to the edge of space aboard his company Virgin Galactic's VSS Unity on July 11. Branson's flight, however, did not go beyond the Karman Line. It climbed nearly 86 kilometres above the Earth's surface.

"Well done @blueorigin, @jeffbezos, Mark, Wally and Oliver. Impressive! Very best to all the crew from me and all the team at @virgingalactic," Branson tweeted.