Banks have pushed out their predictions for when the Bank of England will raise interest rates after data last week showed a sharp and unexpected slowdown in Britain`s economic growth. 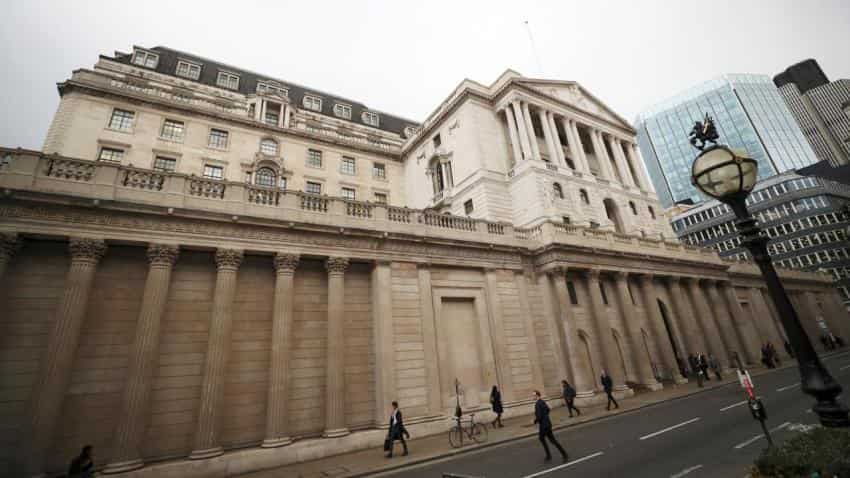 Banks have pushed out their predictions for when the Bank of England will raise interest rates after data last week showed a sharp and unexpected slowdown in Britain`s economic growth. Expectations the British central bank would raise borrowing costs in May had already weakened after Governor Mark Carney highlighted "mixed" economic data and noted there were also "other meetings" this year in an April 19 interview.

Economists now forecast the BoE will not act until August and may even wait until 2019. Before Friday`s GDP data most economists had expected the central bank to tighten monetary policy next month.The changed expectations have hurt the pound, which has fallen sharply in value since the GDP release.

HSBC became the latest bank to erase its solitary rate hike call for 2018, saying on Monday that likely downward revisions to the BoE`s growth forecasts in May would make it harder to justify a rate hike.

"Our view of no rate rises beyond May remains intact: we`ve gone from `May and done` to just `done`," Simon Wells and Elizabeth Martins, analysts at the bank, wrote in a note.

The BoE raised interest rates for the first time in a decade last November, by 25 basis points to 0.5 percent.

Market expectations of a rate hike in May, as measured by swap markets, have fallen following the GDP data to less than 20 percent from around 50 percent. Friday`s figures showed Britain`s economy expanded by just 0.1 percent between January and March, the weakest quarter since 2012.

Earlier this month the market was pricing in as much as a 90 percent chance of a May rate rise.

The change in banks` forecasts signals a much weaker outlook for the pound, which has been among the best performing major currencies in 2018. For the year, it is now up less than 2 percent against the dollar after having been up more than 6 percent two weeks ago.

Expectations of higher rates lifted sterling to its highest since the Brexit referendum in June 2016 at $1.4377 on April 17 but it has tanked nearly 5 percent since then, to $1.3715 on Monday.

The likelihood that the BoE will not hike next month also means bond prices could rally further and presents a more volatile backdrop for the UK stock market.

UBS scrapped its estimate of a single rate rise in 2018 after the weaker-than-expected growth figures while Nomura, which has long been hawkish on UK interest rates, now sees a first hike in August.

John Wraith, a UBS economist, said inflation could fall back to the central bank`s target of 2 percent later this year and that concerns about talks between Britain and the European Union over the terms of their divorce could resurface.

FINELY BALANCED
Bank of America Merrill Lynch and Natwest Markets strategists pushed back their May rate hike calls to November.

"We view the (economic) slowdown as more serious, and see no prospect of hikes in 2018," said UBS, the world`s largest wealth manager, in a note.

The market is now also forecasting no more than one 25 basis point rate hike over the remainder of 2018, from a near-certain two rate rises expected a fortnight ago.

But some analysts such as Sam Hill, a senior UK economist at RBC Europe still believes a rate hike is on the cards unless a raft of survey data this week tanks sharply.

"We are still holding on to a May hike call though we think it is a more finely balanced decision now than earlier as we believe," RBC`s Hill said.