The Bank of England said Britain faces its weakest economic growth in a decade this year as uncertainty over Brexit mounts and the global economy slows, but stuck to its message that interest rates will rise if an EU divorce deal is done. 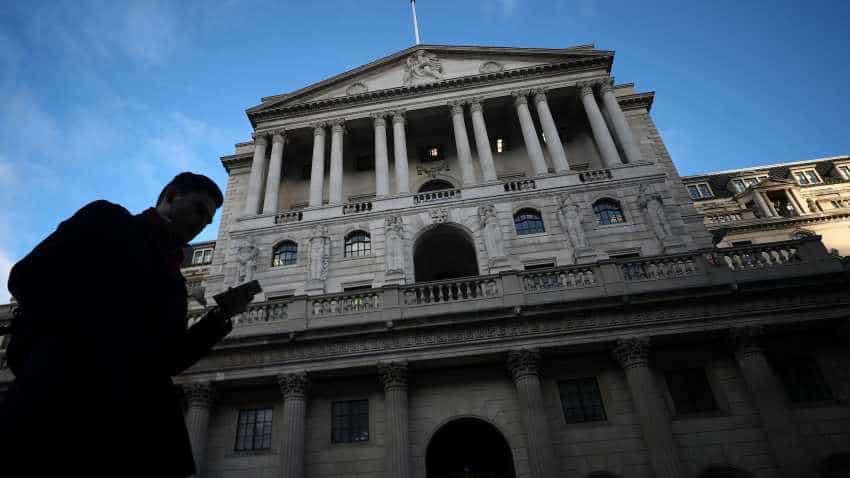 The Bank of England said Britain faces its weakest economic growth in a decade this year as uncertainty over Brexit mounts and the global economy slows. Image source: Reuters

The Bank of England said Britain faces its weakest economic growth in a decade this year as uncertainty over Brexit mounts and the global economy slows, but stuck to its message that interest rates will rise if an EU divorce deal is done.

While other major central banks have said they will hold off from raising borrowing costs, the BoE said gradual and limited rate rises eventually lie ahead for Britain as long as, in just 50 days` time, a no-deal Brexit is averted.

BoE Governor Mark Carney said "the fog of Brexit" wascausing tensions in the world`s fifth-biggest economy, and that the risk of an abrupt, economically damaging departure from the European Union was growing.

"There are still as almost as a wide of range of possibilities as there were the morning after the referendum," Carney said after the Bank`s policymakers voted unanimously to keep rates at 0.75 percent, as expected.

Britain is due to leave the bloc on March 29 but Prime Minister Theresa May wants more concessions from Brussels to rally her divided Conservative Party behind her exit plan, which parliament voted against last month.

Carney said "not everything may be tied up in a nice package" by Brexit day.

Sterling initially fell a quarter of a cent against the dollar, touching a two-week low, but was up on the day after Carney told reporters of the probability of an economic pick-up after a Brexit deal that would usher in a rate hike.

Interest rate futures indicated investors slightly scaled back their expectations for a rate hike this year.

"In the short term, the BoE is definitely more dovish," James Smith, an economist with ING, said. "They are still subtly saying that their preference is to raise rates, but it all hinges on Brexit."

A rate hike this year remained a possibility, Smith added.

The central bank on Thursday slashed its 2019 economic growth forecast to 1.2 percent from a previous estimate of 1.7 percent made as recently as November. That was the biggest forecast cut since immediately after the 2016 Brexit referendum.

Some economists read the forecasts as showing as much as a one-in-four chance of a recession this year, although they also showed a similar chance of growth of more than 2 percent, underscoring the uncertainty of the economic outlook.

The BoE sees business investment and housebuilding falling this year and a halving of the growth rate in exports.

For 2020, the BoE also lowered its overall outlook to 1.5 percent from 1.7 percent before a stronger-than-previously expected 1.9 percent in 2021.

The downgraded growth expectations coincided with the Bank acknowledging that investors had scaled back their expectations on how much interest rates were likely to rise.

The BoE said that in the run-up to Thursday`s announcement, markets were pricing in its Bank Rate reaching 1.1 percent by the end of 2021, compared with 1.4 percent at the time of its last forecasts in November.

Rate rises would run counter to moves by other central banks.

INFLATION STILL ABOVE TARGET
The BoE sent a reminder to investors that rates might rise more quickly than they expect by saying it saw inflation in two years` time at 2.1 percent, a touch above its 2 percent target.

The BoE`s wage forecasts were little changed with earnings rising by more than 3 percent a year over the next three years.

But the bigger picture remains weak. Private-sector business surveys have suggested the economy has slowed to a crawl and the BoE said on Thursday that half of the businesses it surveyed had begun to prepare for a no-deal Brexit.

It repeated its message that it could either cut or raise interest rates after a no-deal Brexit. Many economists think it would opt to help the economy with more stimulus, as it did after the referendum shock of 2016.