"Following the United Kingdom`s vote to leave the European Union, the exchange rate has fallen and the outlook for growth in the short to medium term has weakened markedly," the central bank said in its quarterly Inflation Report. 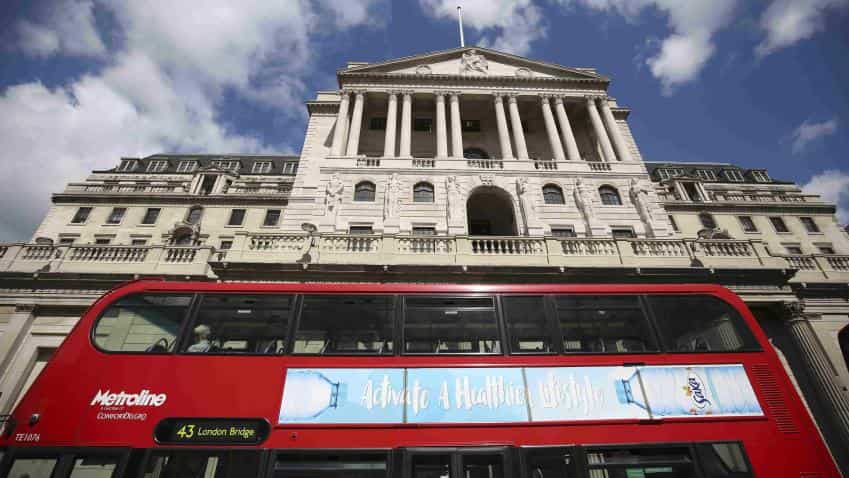 The Bank of England cut interest rates for the first time since 2009 on Thursday and said it would buy 60 billion pounds of government debt to ease the blow from Britain`s June 23 vote to leave the European Union.

The central bank said it expected the economy to stagnate for the rest of 2016 and suffer weak growth throughout next year. It cut its main lending rate to a record low 0.25 percent from 0.5 percent, in line with market expectations.

But it also launched two new schemes, one to buy 10 billion pounds of high-grade corporate bonds and another - potentially worth up to 100 billion pounds - to ensure banks keep lending even after the cut in interest rates.

Most Monetary Policy Committee members also expected to cut Bank Rate again this year to a rate "close to, but a little above zero", if the economy performed as poorly as forecast.

"Following the United Kingdom`s vote to leave the European Union, the exchange rate has fallen and the outlook for growth in the short to medium term has weakened markedly," the central bank said in its quarterly Inflation Report.

Finance Minister Philip Hammond welcomed the rate cut and said he and Bank of England Governor Mark Carney had "the tools we need to support the economy as we begin this new chapter and address the challenges ahead".

Policymakers were not completely united on how to respond to the fallout from Brexit. The cut in Bank Rate and the measure intended to ensure banks passed it on to consumers - known as the Term Funding Scheme (TFS) - gained unanimous support.

Forbes also opposed the purchases of corporate debt - something the BoE did briefly after the financial crisis, but more to aid market functioning than to boost growth.

Many economists had expected Forbes to oppose a rate cut after she said last month that the central bank should not panic and instead wait for more data on the scale of Britain`s economic slowdown.

Daniel Mahoney of the Centre for Policy Studies pointed to the inflationary effect of Thursday`s package of easing measures.

"The Bank`s further loosening of monetary policy could prove problematic for the UK economy. The falling pound means that inflationary pressures are already building up, and today’s decision will exacerbate them," he said.

While many business surveys show Britain`s economy has slowed sharply and may even be entering recession, it is too soon for official data on how the EU vote is affecting output.

The BoE left its forecast for growth this year steady at 2.0 percent, as the economy expanded faster in the first half of 2016 than it had expected in May.

But 2017 brings a sharp downgrade to growth of just 0.8 percent from a previous estimate of 2.3 percent - the biggest downgrade in growth from one Inflation Report to the next, exceeding what was seen in the financial crisis. The growth outlook for 2018 was cut to 1.8 percent.

The BoE also revised up its inflation forecasts sharply, due to the big fall in sterling since the financial crisis, predicting it will hit 2.4 percent in 2018 and 2019. The MPC said the costs of trying to bring it back to its 2 percent target in the immediate future would exceed the benefit.

The MPC launched the Term Funding Scheme to make sure that the lower levels of interest rates now set by the Bank of England are reflected in the costs commercial banks charge households and companies to borrow funds.

The Bank said it does not expect the scheme to lead to significantly faster aggregate loan growth, but to offset any hit to lending from a cut in official interest rates closer to zero.

Eligible institutions will be able to borrow four-year central bank reserves for an initial period of 18 months at rates close to the Bank Rate.

The lowest cost of funding, the 0.25 percent Bank Rate, will be for banks that maintain or expand net lending to the economy and the BoE will charge a penalty rate if banks reduce net lending.

The MPC said it could adjust the terms and length of the scheme, which is funded by central bank reserves and that the value of lending will be determined by usage of the scheme and could reach around 100 billion pounds.

"Alongside the actions the Bank is taking, I am prepared to take any necessary steps to support the economy and promote confidence," Hammond said in a letter to the central bank.

"The government will set out its fiscal plans at the Autumn Statement in the normal way."