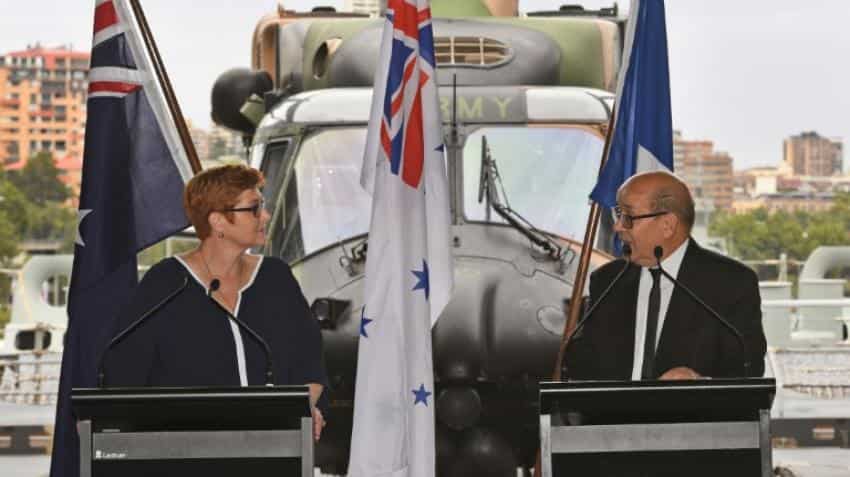 Australia on Tuesday signed a mega deal to purchase a fleet of next-generation submarines from France, with Prime Minister Malcolm Turnbull hailing the vessels` "cutting-edge technology".

The total cost of the 12 submarines, including separate agreements with US and Australian contractors, will hit Australian dollar 50 billion (US $37 billion).

"The IGA is the last foundation stone needed to ensure Australia is able to develop a cutting-edge sovereign submarine capability," Turnbull told reporters.

The agreement is a "critically important step in the development of our security, in the assurance of our government in delivering Australians the security and the prosperity that they need," he added.

With most of the work on the submarines to be carried out in Adelaide, Turnbull underlined the number of domestic jobs to be created.

"This will be a sovereign defence industry... centred here in Adelaide ... creating 2,800 jobs at the very cutting edge of technology," he said.

"Our future, our assurance, our security as a first world high wage generous social welfare net economy depends on the technology, the innovation, the skills that come from investments such as this.

"This is a key element in our economic plan."

Le Drian said the agreement was "an important building block in deepening our bilateral relationship, notably ... between our two navies".

He thanked Australia and described the signing as an "historic event".

Australia awarded DCNS the main contract in April, beating off competition from Germany and Japan.

The inter-governmental agreement sets out the legal framework under which Canberra and Paris will partner on the submarine programme over coming decades.

The vessels will be a scaled-down, conventionally-powered version of France`s 4,700-tonne nuclear-fuelled Barracuda but boast the same stealth capabilities.

Design and mobilisation work has already been launched with Australian experts working in Cherbourg while DCNS was to open new offices in Adelaide later Tuesday employing up to 300 engineers.

US defence contractor Lockheed Martin was named in September to fit the combat systems for the Barracudas.