At UNGA, PM Modi to focus on developmental agenda

Against the backdrop of recent developments in Jammu and Kashmir, all eyes are on the UN General Assembly (UNGA), especially the speeches that Prime Minister Narendra Modi and his Pakistani counterpart Imran Khan will make during the session. 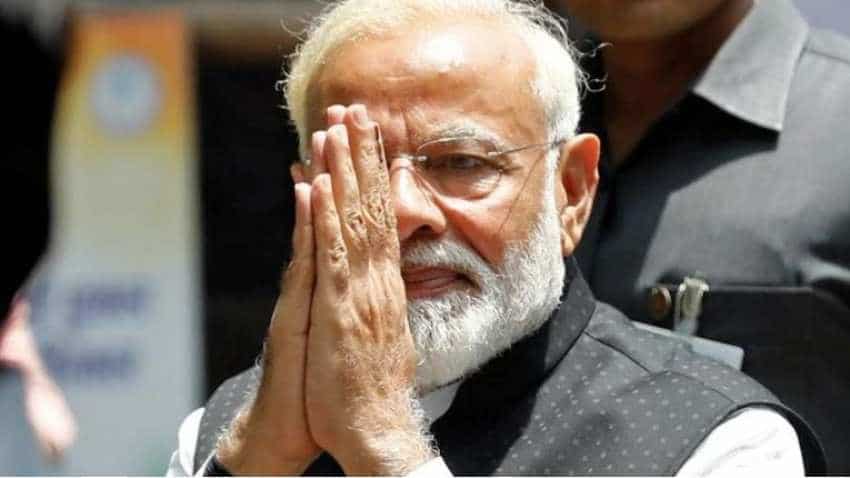 While Imran Khan is set to rake up the J and K issue and be a cry baby, PM Modi is expected to focus his address on developmental issues along with the global challenges like terrorism and climate change. Image source: Reuters
Written By: IANS
RELATED NEWS

Against the backdrop of recent developments in Jammu and Kashmir, all eyes are on the UN General Assembly (UNGA), especially the speeches that Prime Minister Narendra Modi and his Pakistani counterpart Imran Khan will make during the session. Khan, who will be addressing the UNGA on September 27, has said he will "forcefully" raise the issue of Jammu and Kashmir at the forum. Modi is also scheduled to address the world body the same day.

While Khan is set to rake up the Jammu and Kashmir issue and be a cry baby, Modi is expected to focus his address on developmental issues along with the global challenges like terrorism and climate change. He will also articulate his views on the global economy and multi-polarity. An indication that Modi would not be drawn into Khan`s rhetoric play was given by India`s Permanent Representative to the UN Syed Akbaruddin who said: "There may be some who stoop low. Our response to them is -- we soar high. They may stoop low, we soar high."

His comment came when asked what would be India`s response as Khan is set to raise the issue at UNGA. Likening Khan`s impending agenda of raking up the Kashmir issue at UNGA to mainstreaming of "hate speech", Akbaruddin said: "We are confident that we will soar. We have given you examples of how we will not stoop. We will soar when they stoop low."

Pakistan has been desperately trying to internationalise the issue of Jammu and Kashmir ever since the government of India ended special status of the state on August 5. It has been inviting third party mediation but has faced rebuff as no country is willing to get involved. In a bid to draw international attention, Pakistan has even tried to create war hysteria and attempted nuclear blackmail but without any success, leading to its further frustration.

India has asserted repeatedly that decisions related to Jammu and Kashmir are its internal matter and that it will brook no third party interference. In fact, Modi, during a meeting with US President Donald Trump in France last month, bluntly told him that there was no need for any other country to take the "trouble" of getting involved in Jammu and Kashmir issue.

Indian leaders have lately been saying that if there are any talks with Pakistan on Jammu and Kashmir, those would be on vacation of territories of the state under Pakistani occupation. In his address at the UNGA, Modi is likely to talk about the path of economic progress and development chosen by India and the country`s aspiration to become a 5 trillion dollar economy by 2024. He is likely to highlight how the world could take advantage as India moves towards high economic growth, while pointing out the decisions taken to facilitate `ease-of-doing-business` in the country.

The theme of the UNGA this year is `Galvanizing multilateral efforts for poverty eradication, quality education, climate action and inclusion`. In a statement issued prior to his departure for the seven-day visit to the US last night, Modi said: "There are many pressing challenges for the international community - a still fragile global economy, turbulence and tension in many parts of the world, growth and spread of terrorism, climate change and the endemic global challenge of poverty."

These issues "require stronger global commitment and concerted multilateral action", the Prime Minister said, adding "I will reiterate our commitment to reformed multilateralism, which is responsive, effective and inclusive, and in which India plays her due role." He noted that since its participation as a founding member of the UN in 1945, India has shown unwavering commitment to multilateralism to advance peace and security and promote broad-based inclusive economic growth and development in the world.