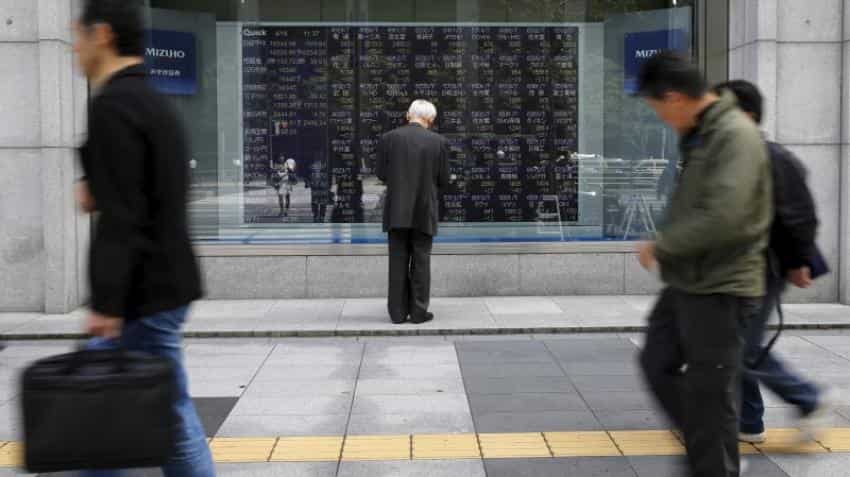 Asian shares edged lower on Tuesday as investors nervously waited on the outcomes of the Federal Reserve and Bank of Japan policy meetings that begin later in the session.

Global markets have been blowing hot and cold in recent weeks over the Fed`s intentions, not helped by both hawkish and dovish comments from several Fed officials over this period.

The consensus is that the Fed will leave interest rates unchanged at the end of its two-day meeting, with investors focusing on the statement as well as Chair Janet Yellen`s speech for clues on the timing of the central bank`s next interest rate increase.

"It`s a lot of uncertainty, leading into the Fed," said Jennifer Vail, head of fixed income research at US Bank Wealth Management in Portland, Oregon.

While Vail, like most strategists and investors, expects the Fed to refrain from taking any new steps, she said its statement could include language that`s been missing from its recent assessments, such as whether economic risks were "balanced" or "close to balanced."

Japan`s Nikkei stock index shed 0.5%, as trading resumed after a public holiday on Monday. Tokyo markets will be closed for another holiday on Thursday, with the highly-anticipated BOJ meeting sandwiched in between the market closures.

The BOJ could shift negative interest rates to the primary focus of its monetary policy at the conclusion of its two-day meeting on Wednesday, when it conducts what it described as a "comprehensive" assessment of its policies.

Sources have said BOJ policymakers may consider deepening negative interest rates to show its determination to maintain an ultra-easy policy bias. It unveiled the controversial policy in late January.

"The resulting strength of the yen since then can`t really give them a positive outlook on negative rates," said Vail, adding that "the risk is for lack of any action, given the lack of consensus" among BOJ members.

Rising speculation that the BOJ will stop short of the dramatic action needed to weaken its currency helped send the dollar to a six-day low against the yen of 101.56 yen on Monday. The dollar was last down 0.1% at 101.82 yen.

Wary of a flattening Japanese government bond (JGB) yield curve, the BOJ could seek ways to steepen the curve, such as making its bond buying more flexible.

"We look for the BOJ to take a more flexible stance on the time horizon for reaching its price stability target and on the pace of its JGB purchases, but expect it to refrain from further easing at this meeting," strategists at Barclays said.

The euro was steady at $1.1177 , while the dollar index, which tracks the greenback against a basket of six major rivals, was nearly flat at 95.845

Oil had rallied on Monday before settling off its highs on scepticism over Venezuela`s bid to talk up a potential OPEC output freeze, and on indications US crude stockpiles had risen last week. Spot gold inched slightly higher to $1,313.80 an ounce.