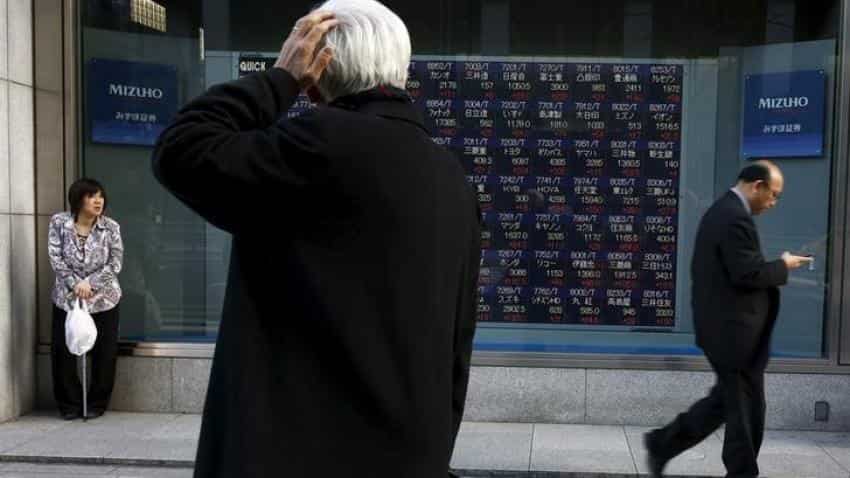 The rise in risks of a conflict contrasts with market watchers` outlook for the global economy, which is perhaps the most optimistic it has been in years, with Chinese data this week expected to show the economy performing well. Image Source: Reuters
Written By: Reuters
RELATED NEWS

Asian stocks started the week on a cautious footing on Monday as increased geopolitical risks prompted investors to favour safe-haven bets such as government debt while the dollar benefited from comments from a U.S. central banker.

The rise in risks of a conflict contrasts with market watchers` outlook for the global economy, which is perhaps the most optimistic it has been in years, with Chinese data this week expected to show the economy performing well.

Top aides to U.S. President Donald Trump differed on Sunday on where U.S. policy on Syria was headed after last week`s attack on a Syrian air base, while U.S. Secretary of State Rex Tillerson warned the strikes were a warning to other nations, including North Korea.

A U.S. Navy strike group will be moving toward the western Pacific Ocean near the Korean peninsula as a show of force, a U.S. official told Reuters on Saturday, as concerns grow about North Korea`s advancing weapons program.

"The risks of a conflict have certainly grown and that should keep the dollar supported against most Asian currencies with hawkish comments from the U.S. central bank also helping," said Gao Qi, an FX strategist at Scotiabank in Singapore.

MSCI`s broadest index of Asia-Pacific shares outside Japan was broadly flat after declining 0.4 % on Friday. Korea was down 0.5 % while Australia was up by 0.4 %.

Economic data also offered little support with major U.S. indexes closing lower in choppy trade after a key jobs report on Friday showed the economy added 98,000 jobs in March, the fewest since last May and well below economists` expectation of 180,000.

With S&P 500 valuations on a forward earnings basis at their highest since 2004, market watchers will be hoping for stellar corporate results to sustain a market rally.
RISK RISING

Risk indicators have edged higher with the CBOE Volatility Index trading at near 13 compared to around 11 at the beginning of March, prompting some analysts to warn of a pull back in global equities.

"Shares remain vulnerable to a short term pull-back as investor sentiment towards them is very bullish and a lot of good news has been factored in which has left them vulnerable to any bad news," said Shane Oliver, head of investment strategy at AMP Capital in Sydney.

The dollar index, a trade-weighted basket of the greenback against its major rivals was trading near a one-month high of 101.26.

Only the yen, a favoured haven in times of stress, offered some resistance against the greenback at 111.39 yen, after touching 110.11 on Friday, its lowest since March 27.

Support for the dollar also came from rising U.S. yields after comments from a U.S. policymaker boosted expectations for Federal Reserve interest rate increases this year.

Yields on 10-year U.S. Treasuries were at 2.39 % on Monday after briefly breaking below a significant chart barrier at 2.30 % on Friday for the first time this year.

Oil prices held firm at $52.45 per barrel, on risks that the Syria conflict may spread more widely within the oil-rich Middle East region.