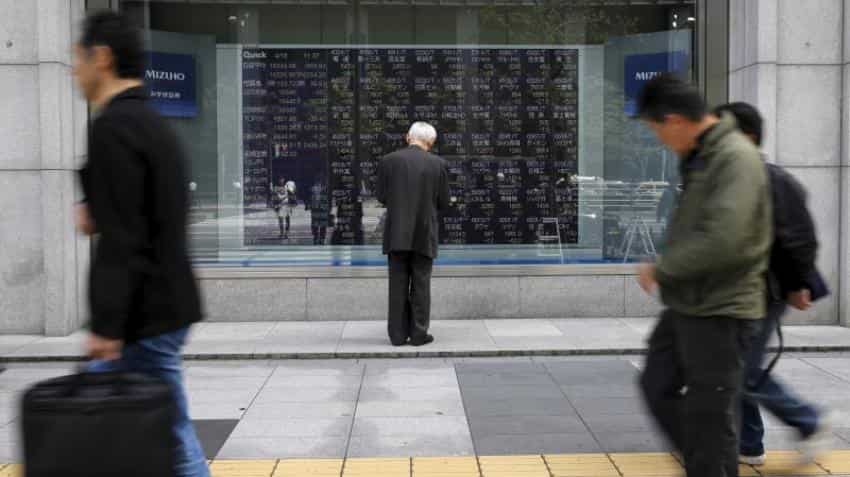 The euro was steady at $1.1217 after losing about 0.4% overnight on concerns over Europe`s banking sector. Photo: Reuters
Written By: Reuters
RELATED NEWS

Asian stocks edged up early on Wednesday following an overnight rise for US stocks, while reduced hopes that a meeting of major producers would reduce a oversupply weighed heavily on crude oil prices.

MSCI`s broadest index of Asia-Pacific shares outside Japan rose 0.1%. Australian stocks were up 0.5% while South Korea`s Kospi was flat. Japan`s Nikkei was last down 1.1%.

Overnight, the Dow rose 0.7% and Nasdaq added 0.9%. A perceived win by Democrat Hillary Clinton over Republican Donald Trump at the first presidential debate gave broader support to equities, although sliding oil prices were a drag on the energy sector.

Oil fell about 3% on Tuesday after Saudi Arabia and Iran dashed market expectations that the two major OPEC producers would find a compromise this week at a meeting in Algiers to help ease a global glut of crude.

With oil prices having dropped to less than half of their 2014 highs, the Algiers talks are OPEC`s second attempt at an output agreement after a failed round in Qatar in April.

"The market currently does not expect any agreement at this meeting, so no agreement should have only limited negative impact on the oil price," wrote Marshall Gittler, head of investment research at FXPRIMUS.

"Expectations are now so low though that if by some miracle they did come to even a half-hearted agreement, that would probably send prices up sharply."

In currencies, the dollar was flat at 100.470 yen . It had popped up to 100.990 yen on Tuesday when Clinton was seen to have emerged as the winner at the debate and removed an element of uncertainty. But the rise petered out with the market reminded that Clinton also favours a weaker dollar, and with the greenback also hurt by falling US yields.

The euro was steady at $1.1217 after losing about 0.4% overnight on concerns over Europe`s banking sector.

The Mexican peso, which jumped against the dollar following Clinton`s perceived debate win, held to its gains. The currency stood little changed at 19.38 pesos to the dollar , having rallied on Tuesday from a record low of 19.92 hit earlier on worries that a Trump win would threaten Mexico`s exports to the United States.

The 10-year US Treasury note yield hovered near a three-week low of 1.546% touched overnight amid speculation that Europe`s banking woes could delay the Fed`s next interest rate hike.