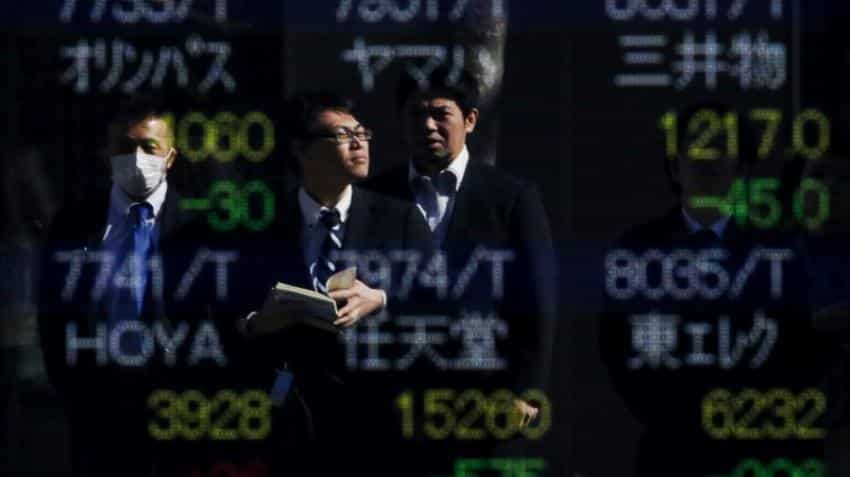 People are reflected in a display showing market indices outside a brokerage in Tokyo. Image Source: Reuters

MSCI's broadest index of Asia-Pacific shares outside Japan was slightly higher in early trading, while Japan`s Nikkei stock index gained 0.6 % as the dollar rose against the yen.

U.S. shares slumped overnight, with shares of Deutsche Bank resuming their slide as hopes faded that Germany`s largest lender would reach a swift deal with the U.S. Department of Justice over a fine of up to $14 billion for mis-selling mortgage-backed securities.

Also in focus, the Institute for Supply Management (ISM) said its index of national factory activity rose to 51.5 from 49.4 the prior month, indicating that the sector is now expanding.

The upbeat data had a mixed impact. While strong data reassures investors worried about the strength of the U.S. economy, it also adds to bets that the Federal Reserve is on track to raise interest rates as early as this year. Higher rates, while good for the dollar, could pressure equities markets.

"Firmed prospects for a December rate hike were not taken well in the equity markets," Angus Nicholson, market analyst at IG in Melbourne, wrote in a note. "The prospects of higher interest rates makes the present value of steady cash flow producing assets such as property and utilities correspondingly less valuable."

The main economic event this week is Friday`s nonfarm payrolls report. Employers are expected to have added 170,000 jobs in September, according to the median estimate of 59 economists polled by Reuters.

Sterling crept up 0.2 % to $1.2851 after plunging close to 31-year lows against the dollar on Monday after the UK set a March deadline to begin the formal process for Britain`s exit from the European Union.

The Australian dollar edged up 0.1 % to $0.7679 and Australian shares slipped 0.4 %, ahead of a monthly policy decision later on Tuesday by the Reserve Bank of Australia (RBA).

Australia`s central bank is widely expected to hold its cash rate at a record low of 1.5 %, a Reuters poll of 57 economists found on Friday, following cuts in August and May.