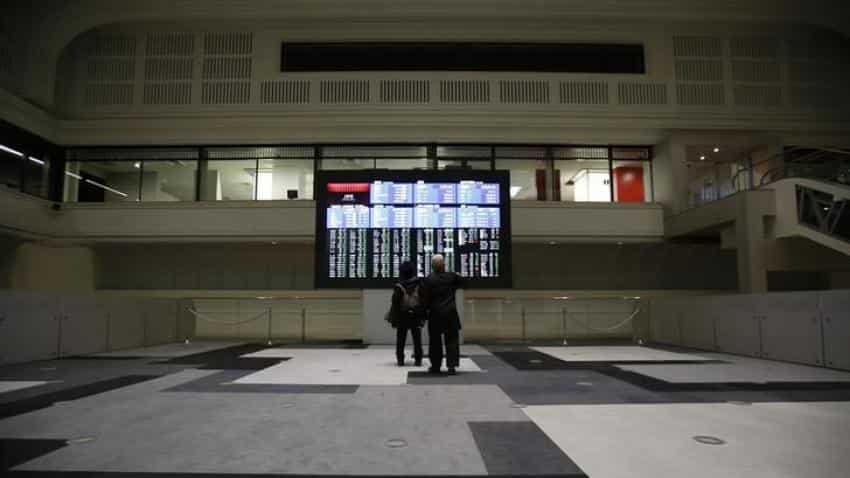 Visitors looks at an electronic board showing the Japan''s Nikkei average at the Tokyo Stock Exchange in Tokyo. Image Source: Reuters

Asian shares slipped on Friday and the dollar nursed losses in a week marked by growing uncertainty about the outcome of the US presidential election.

Investors have been unnerved in recent days by signs that the US presidential race between Democrat Hillary Clinton and Republican Donald Trump was tightening just days before Tuesday's vote.

That anxiety has rippled across global financial markets, with other events and data such as the looming US employment report playing second fiddle to the ramifications of a potential Trump presidency.

According to two polls released on Thursday, Clinton, who is seen as the status quo candidate by markets, maintained her narrow lead over Trump.

Trump, a political novice, has campaigned to rip up trade deals and slap high tariffs on imported goods, while there is uncertainty about his stance on US foreign policy and immigration.

"There remains scope for a significant sell-off if Trump wins," wrote Ric Spooner at CMC Markets.

"Markets are currently attempting to strike the right balance between the greater probability of a Clinton win and the possibility of a significant sell-off on a Trump victory," Spooner said. "The more the market falls in advance of the election, the greater the potential for two-way volatility and a significant bounce if Clinton does get up."

MSCI's broadest index of Asia-Pacific shares outside Japan slipped 0.2% in early trade, down 1.4 for the week.

On Wall Street on Thursday, US stocks sagged, with the S&P 500's eighth straight losing session marking its longest streak since the 2008 financial crisis. A slump in Facebook shares and the US election jitter sapped investor confidence.

Japan's Nikkei stock index skidded 0.9%, reopening after a public holiday on Thursday and catching up to the previous session's losses. It was down 2.7% for the week, dragged down by the resurgence of the perennial safe-haven yen.

The dollar index, which tracks the greenback against a basket of six rival currencies, stood at 97.177, down 1.2% for the week and not far from a more than three-week low of 97.041 struck overnight.

The non-farm payrolls report due later on Friday is expected to show employers added 175,000 jobs in October, according to the median estimate of 106 economists polled by Reuters.

US data on Thursday showed that services industry activity cooled last month amid a slowdown in new orders and hiring, while planned job cuts by US-based employers dropped 31% to a five-month low. That underscored the labour market`s healthy fundamentals, though more Americans filed for unemployment benefits last week.

The pound was a stand-out performer overnight, rising to a nearly one-month high of $1.2494 on Thursday after a British court ruled that the government needs parliamentary approval to start the process of leaving the European Union (EU). That could potentially delay Prime Minister Theresa May's Brexit plans.

The pound also got a boost from the Bank of England (BoE), which scrapped its plan to cut interest rates and ramped up its forecasts for growth.

Oil prices took back some ground after settling down more than 1% on Thursday as investors reacted to a record weekly surge in US crude inventories and remained sceptical that OPEC will actually implement its planned output curbs.