MSCI`s broadest index of Asia-Pacific shares outside Japan was down 0.2 percent in early trade. U.S. markets were closed for a public holiday on Monday. 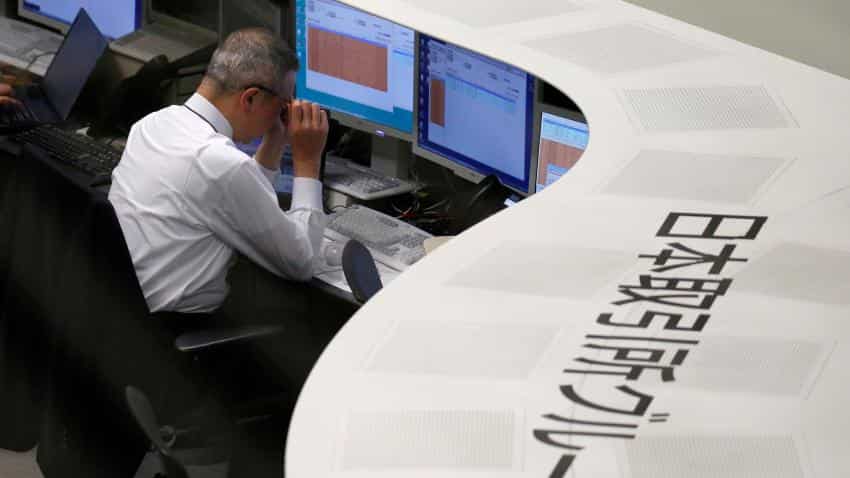 TSE employee is seen before a ceremony marking the end of trading in 2017 at the TSE in Tokyo. Photo: Reuters
Written By: Reuters
RELATED NEWS

Asian shares slumped on Tuesday, as miners were pressured by weaker Chinese iron ore prices, while the euro stood near a 3-year peak on rising expectations that the European Central Bank could pare its monetary stimulus.

MSCI`s broadest index of Asia-Pacific shares outside Japan was down 0.2 percent in early trade. U.S. markets were closed for a public holiday on Monday.

Chinese iron ore futures tumbled 2 percent on Monday, as stockpiles of the steelmaking commodity at China`s ports surged to the highest since at least 2004, with weaker steel prices also adding pressure.

Japan`s Nikkei stock index was slightly higher in early trading, but momentum was heavy with exporters struggling to shake off the effect of a stronger yen.

The euro blipped higher on Monday and German benchmark bond yields hit session highs after European Central Bank rate-setter Ardo Hansson said the central bank could end its bond purchase scheme in one go after September if the economy and inflation develop as expected.

Adding to the euro`s ascent, data showed the trade surplus in the 19-country euro area rose to its highest level in eight months, indicating companies were so far weathering the impact of a stronger currency.

The dollar index, which gauges the U.S. currency against a basket of six major rivals, wallowed at more than three-year lows. It was last down 0.6 percent at 90.451, after dropping as low as 90.279 on Monday, its deepest nadir since December 2014.

"The dollar`s problems began last week, when investors sold the dollar on expectations that the Bank of Japan might begin to taper its stimulus," said Mitsuo Imaizumi, Tokyo-based chief foreign-exchange strategist for Daiwa Securities.

"It then continued as the euro rose on suggestions that the ECB would take further normalization steps, showing how sensitive markets are to perceived signals from central banks," he said.

Crude oil prices got a lift to their highest levels since December 2014, helped by the dollar`s recent weakness as well as signs that production cuts by OPEC and Russia are tightening supplies.