Japan`s Nikkei dropped 0.8%, weighed by financial stocks, which were hurt by lower U.S. yields and exporter stocks, which fell on the yen`s gains against the dollar. 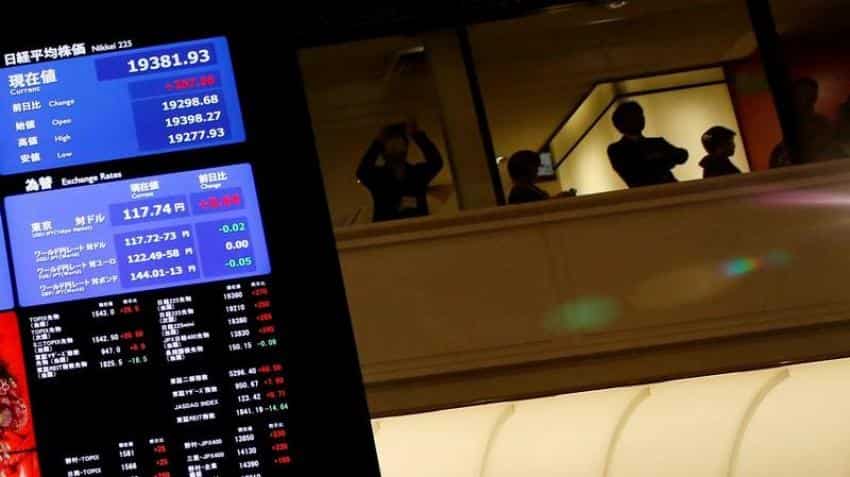 Asian shares clung to their 15-month highs on Tuesday while the dollar and U.S. bond yields were on the back foot on the prospects of a less-hawkish Federal Reserve policy trajectory.

Japan`s Nikkei dropped 0.8%, weighed by financial stocks, which were hurt by lower U.S. yields and exporter stocks, which fell on the yen`s gains against the dollar.

While Asian shares have been supported by signs of strong global economic growth, concerns about protectionism cast a shadow after financial leaders of the world`s biggest economies dropped a pledge to keep global trade free and open, acquiescing to an increasingly protectionist United States

"Any fiscal spending by the Trump administration will not come until August at earliest and probably much later. So any economic benefit of that will show up only next year," said a senior trader at a European bank. So the markets are gradually pricing that in, winding back their initial rally after the elections."

Although Trump promised in early February to deliver a "phenomenal" tax plan within a few weeks, no such details have been released yet.

"U.S. stocks valuations are getting really expensive, so I expect the market to be capped for now. That also means Japanese shares are unlikely to gain further," said Tatsushi Maeno, senior strategist at Okasan Asset Management.

Expectations that the Federal Reserve will have to step up rate hikes to counter inflationary pressure from Trump`s stimulus are also waning after the Fed dropped no hints of an acceleration in credit tightening last week.

Chicago Federal Reserve President Charles Evans, in one of the first official comments after the Fed raised rates as expected last week, reiterated that message on Monday.

He said that two more interest rate hikes this year are likely, disappointing investors who had anticipated a faster path of rate increases. His comments helped to bring down the 10-year U.S. Treasuries yield to 2.463%, its lowest level in two weeks.

Lower yields undermined the greenback`s allure, softening the dollar to three-week lows near 112.485 yen . The dollar`s index against a basket of six major currencies stood at 100.37, after hitting a six-week low of 100.02 on Monday.

Oil prices stayed under pressure, though they hovered above their 3-1/2-month lows touched a week ago, as investors continue to grapple with worries about growing U.S. oil output and high inventories.