MSCI's broadest index of Asia-Pacific shares outside Japan slid 0.4%, taking its losses to nearly 5% so far this month and nearing its lowest levels since March 9. 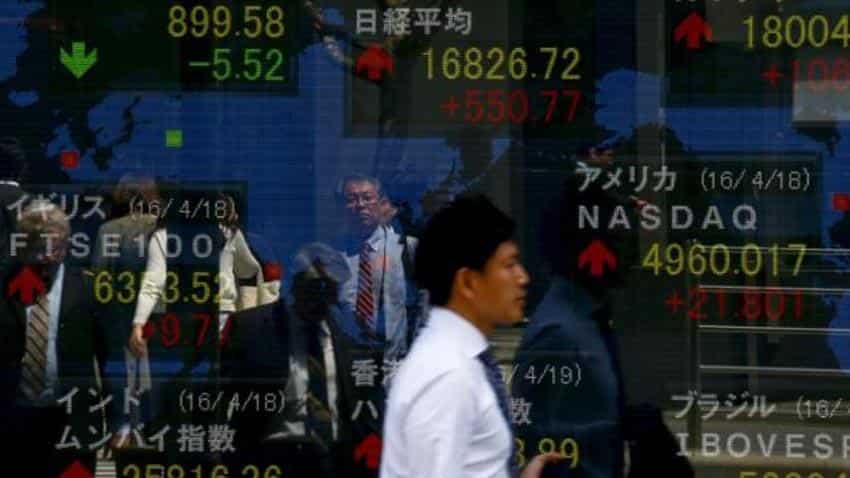 A man walks past a display of the Nikkei average and other market indices outside a brokerage in Tokyo, Japan April 19, 2016. Image Source: Reuters/ Thomas Peter

Asian shares fell to near 10-week lows on Tuesday and the US dollar pared some of its recent losses as investors worried about the likelihood of a US interest rate increase in coming weeks.

MSCI's broadest index of Asia-Pacific shares outside Japan slid 0.4%, taking its losses to nearly 5% so far this month and nearing its lowest levels since March 9.

"The market seems to be taking a cautious stance ahead of the US Fed Chair Janet Yellen's speech later this week," said Jung Sung-yoon, a foreign exchange analyst at Hyundai Futures.

A string of comments in recent weeks by US Federal Reserve officials and minutes of the last Fed meeting have put a possible rate hike firmly on the table for June or July, reviving the US dollar but cooling appetite for riskier assets, even if markets are not totally convinced a tightening will come so soon.

Philadelphia Fed President Patrick Harker said on Monday that a hike in June is appropriate unless data weakens while St Louis Fed President James Bullard said holding rates too low for too long could cause financial instability.

With economic growth across emerging markets showing fresh signs of flagging -- ratings agency Moody's said growth in G20 emerging markets to ease to 4.2% in 2016 as compared to 4.4% last year -- investors are growing more bearish on the outlook for stocks.

Shares in China and Japan led regional markets down with 0.7% losses each, though some investors were wary of chasing markets lower after their recent retreat.

Chris Weston, chief market strategist at IG Markets in Melbourne described sentiment as "undoubtedly bearish," adding that prices are "delicately poised and could go either way."

The dollar trimmed some of its losses against the yen after skidding nearly 1% against its Japanese rival in the previous session to a low of 109.12. It was last up 0.2% at 109.40 yen, moving back toward Friday's three-week high of 110.59.

Data on Monday showed Japan posted a trade surplus for the third consecutive month, and a Group of Seven finance ministers' meeting concluded on Saturday with the US warning to Japan against intervention to weaken the yen.

But overall, the dollar was bolstered by growing bets that the Fed was gearing up to raise interest rates sooner than many investors had expected, despite signs of persistent global weakness.

"The yen gained as risk aversion overcame the Fed officials' hawkish views. Upward pressure on the yen was stronger due to weaker stocks and falling commodities," said Junichi Ishikawa, FX analyst at IG Securities in Tokyo.

"That said, the dollar index has stood tall overall amid a significant rise in the two-year US Treasury yield. Trades preparing for a potential Fed rate hike in June are likely to continue."

Fed Chair Janet Yellen will appear at panel at Harvard University on Friday, a day on which investors will also see the second estimate of the US first-quarter growth. Markets also await comments from other Fed officials this week, as well as data on new home sales, durable goods orders, and consumer sentiment.

The dollar index, which tracks the US unit against a basket of six major counterparts, was up a shade at 95.32, still with a sight of Thursday's peak of 95.520, its loftiest level since March 29.

Crude oil futures stabilised after dropping on Monday as Iran vowed to ramp up output and as the number of rigs drilling for crude in the United States (US) held steady after declining for eight straight weeks.