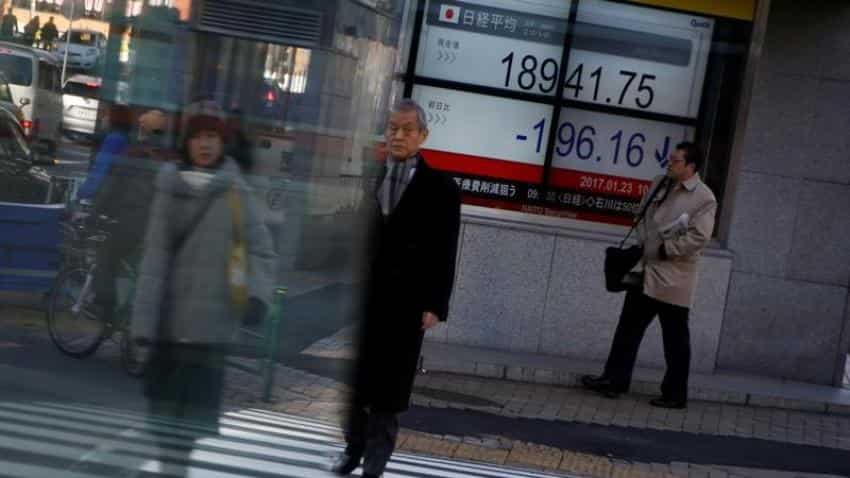 US crude was up slightly on the day at $54.08 per barrel. Photo: Reuters
Written By: Reuters
RELATED NEWS

Asian shares edged up on Tuesday, bolstered by gains on Wall Street as investors awaited a speech by US President Donald Trump for signals on tax reform and infrastructure spending.

MSCI`s broadest index of Asia-Pacific shares outside Japan was up 0.1% in early trading, while Japan`s Nikkei stock index got a tailwind from a weaker yen and gained 0.7%.

On Monday, US stocks edged up, with the Dow Jones Industrial Average closing at a record high for a 12th straight session, after Trump said he would talk about his plans for "big" infrastructure spending in his first major policy address to Congress on Tuesday (9 pm ET/0200 GMT on March 1).

"This could be like the case of his inauguration speech, in which expectations were high, but he didn`t come up with any concrete details," said Ayako Sera, market strategist at Sumitomo Mitsui Trust Bank.

"The market does not want a repeat of that, and wants to hear some actual plans, or there will be disappointment," she said.

Treasury Secretary Steven Mnuchin said in a televised interview on Sunday that Trump will use the event to preview some elements of his sweeping tax reform plans.

Trump will seek to boost Pentagon spending by $54 billion in his first budget proposal and slash the same amount from non-defence spending, including a large reduction in foreign aid, a White House budget official said.

The dollar added 0.1% to 112.80 yen , pulling away from Monday`s nadir of 111.920, which was its lowest since Feb. 9. The euro edged down slightly on the day to $1.0583. Hawkish comments from a US Federal Reserve official also bolstered US Treasury yields and underpinned the dollar.

Dallas Fed President Robert Kaplan said on Monday that the Fed might need to raise interest rates in the near future to avoid falling behind the curve on inflation.

The yield on benchmark 10-year US Treasuries, which had slumped to more than five-week lows last week, stood at 2.359% in Asian trade, compared to their US close of 2.367% on Monday.

Crude oil prices were steady, as expectations of higher US crude production offset reports of high compliance with OPEC`s production cut agreement. US crude was up slightly on the day at $54.08 per barrel.

Spot gold edged up slightly to $1,253.24 an ounce but remained shy of a 3-1/2-month peak scaled on Monday as investors awaited Trump`s speech.