Trump pledged to deliver "massive" tax relief to the middle class and corporate tax cuts, to spend heavily on infrastructure and to ease regulations -- steps that have helped to push U.S. stocks higher since his election victory in November. 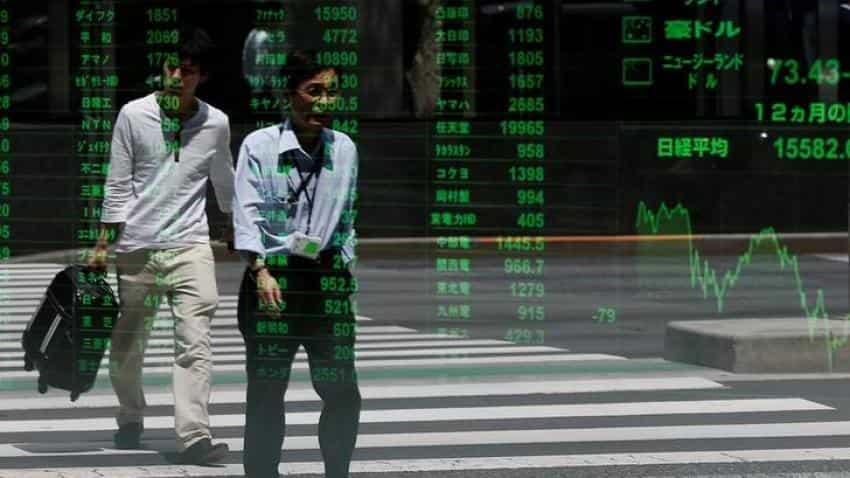 Asian shares rose on Thursday as investors were encouraged by President Donald Trump`s less combative tone in his first speech to Congress, which sent Wall Street stocks sharply higher, while growing bets on a U.S. rate hike this month buoyed the dollar.

On Wall Street, the Dow Jones Industrial Average blasted through the 21,000-point mark for the first time. Both the Dow and the S&P 500 rallied around 1.4 percent.

Trump pledged to deliver "massive" tax relief to the middle class and corporate tax cuts, to spend heavily on infrastructure and to ease regulations -- steps that have helped to push U.S. stocks higher since his election victory in November.

While Trump gave few new details on his tax or spending plans, investors were encouraged by what they saw as a less confrontational tone as he tries to push his growth agenda through a Congress reluctant to widen the government`s budget deficit.

More to the point, his stimulus plan comes as the global economy is picking up momentum.

"Trumpflation may be a misnomer. The uptick in manufacturing predates the election. It continued in February," ING said in a note, pointing to generally strong factory activity readings around the world last month.

"It’s better to be lucky than good. We think President Trump may be lucky in holding office when the overhang of debt and fear from the Global Financial Crisis lifts."

A rate hike by the Federal Reserve later this month also would signal policymakers` growing confidence in U.S. and global economic expansion.

"The U.S. economy is strong enough to allow the Fed to raise rates. And then we are going to have one trillion dollars in public spending," said a trader at a European bank.

"Under such conditions, we are likely to see a gradual rise in U.S. stocks, with volatility remaining low, until the Fed overkills the economy," he said.

Usually-dovish Fed Governor Lael Brainard also joined the chorus, saying an improving global economy and a solid U.S. recovery mean it will be "appropriate soon" for the Fed to raise rates.

Fed Funds rate futures are now pricing in about an 80 percent chance that the Fed will bump up interest rates by 0.25 percentage point at its policy meeting on March 14-15, compared to around 30 percent at the start of this week.

In Europe, the premium investors demand for holding French bonds over German bonds shrank to the smallest in a month after scandal-hit French presidential candidate Francois Fillon vowed to stay in the election fight.

That is perceived to contribute to limiting the chance of a victory by far-right National Front leader Marine Le Pen, who could pull the country out of the euro zone and the European Union.

In the currency market, the dollar benefited from rising expectations of a Fed rate hike.

The dollar`s index against a basket of six major rivals rose to its highest level in seven weeks.

The British pound sank to a six-week low of $1.2261 as disappointing UK economic data added to political nerves that have begun to weigh on the currency again after last year`s Brexit vote.

Oil prices loitered within a familiar range, as record high U.S. crude supplies tempered support from evidence that OPEC producers are complying with an agreement to cut production.