Shanghai put on 0.6%, while South Korea added 0.6%. Liquidity was lacking with Tokyo closed for a holiday. 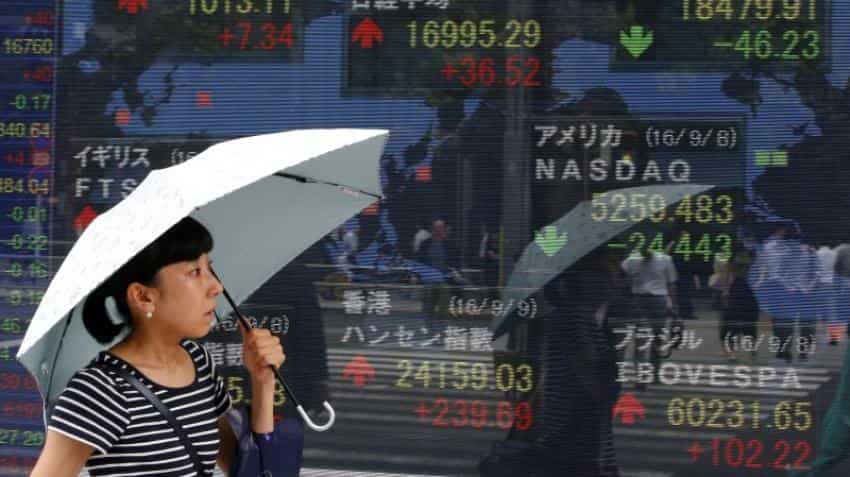 A woman walks past stock quotation board outside a brokerage in Tokyo. Photo: Reuters
Written By: Reuters
RELATED NEWS

Asian shares advanced on Monday ahead of central bank meetings in the United States and Japan this week, while oil prices bounced on talk of an OPEC deal on output and reports of fighting around Libyan oil ports.

Shanghai put on 0.6%, while South Korea added 0.6%. Liquidity was lacking with Tokyo closed for a holiday.

Financials led the losses on news authorities had proposed to fine Deutsche Bank $14 billion sent its shares down 9.35 %. Goldman Sachs and JPMorgan both fell over 1 %.

Bombings in New York City and New Jersey and a stabbing at a Minnesota shopping mall added to a general air of risk aversion.

While US officials are investigating the attacks as potential "acts of terrorism," they stopped short of characterizing the motivation behind any of them until more evidence is uncovered.

Investors are counting down to the Federal Reserve`s Open Market Committee meeting Sept. 20-21, with chair Janet Yellen holding a news conference on Wednesday.

A surprisingly large rise in U.S. consumer price inflation reported on Friday seemed to add to the case for a hike and pushed the dollar higher.

Yet most recent consumer and industrial activity data have disappointed, leaving the market still pricing in only a 12 % probability of a rate rise this week, and 45 % for December.

Assuming no move on policy, the focus will be on the FOMC`s forecasts for the funds rate, which this time extend to 2019.

"They may use the extension to lower their expectations for rates in 2017 and 2018, so that they end up with the same terminal level of rates but just take longer to get there," said Marshall Gittler, head of investment research at FXPRIMUS.

"In other words, a slower, more gradual pace of tightening. In that case I would expect the dollar to weaken."

BOJ a greater unknown
The Bank of Japan also meets on Wednesday and could well go in the opposite direction by easing policy, though conflicting reports on what it might do have stoked much uncertainty.

Sources have said the BoJ will consider making negative interest rates the centrepiece of future easing by shifting its prime policy target away from base money.

Any steps that markets consider to be less than aggressive would likely see the yen push higher and pressure the Nikkei.

Early on Monday the dollar had eased to 102.08 yen, surrendering some of the gains made on Friday in the wake of the firm U.S. inflation figures.

The dollar index, which measures the greenback against a basket of six currencies, dipped 0.2 % to 95.901.

The euro was just above a 10-day low at $1.1164, while sterling inched up from a one-month low to $1.3033 after suffering jitters on plans to leave the European Union.

British Prime Minister Theresa May signalled that she could be ready to launch formal Brexit negotiations in January or February, European Council President Donald Tusk has said.

Oil prices bounced on reported clashes at Libyan oil ports. Eastern Libyan forces said they had re-established control over two oil ports where an ousted faction launched a counter-attack on Sunday, briefly seizing one of the terminals.

Venezuelan President Nicolas Maduro was also reported saying a deal between OPEC and non-OPEC members was "close" and he aimed to announce a deal to stabilise the market this month.