Asian stocks struggled to shake off contagion fears on Tuesday and selling pressure persisted amid concern that troubles at indebted developer China Evergrande could ripple across the world economy, markets and financial system. 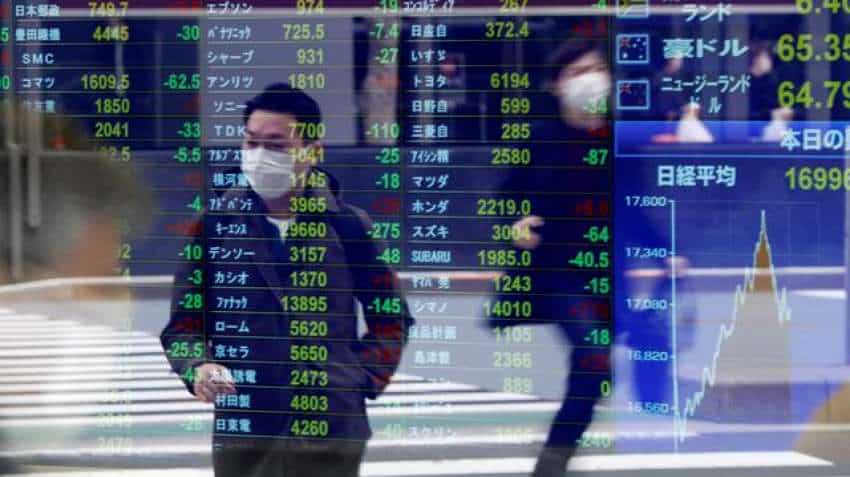 Asian stocks struggled to shake off contagion fears on Tuesday and selling pressure persisted amid concern that troubles at indebted developer China Evergrande could ripple across the world economy, markets and financial system.

Hong Kong`s Hang Seng hit a fresh 11-month low and was down 0.3% by midsession, with early gains in banks and property stocks paring a little. Japan`s Nikkei returned from a market holiday with a drop of almost 2%.

Currency, commodity and bond markets steadied, but overall demand for riskier assets remained low especially as the Federal Reserve is expected to step closer to tapering on Wednesday.

European futures rose 0.5% in the Asia session. FTSE futures advanced 0.7% and S&P 500 futures climbed 0.6% a day after selling hit banks on both sides of the Atlantic and tipped the S&P 500 to its steepest fall in two months.

"For markets to bounce we need to see concrete actions from the authorities to stem any wide spread contagion," said Dave Wang, a portfolio manager at Nuvest Capital in Singapore.

Though China is on holiday, and mainland markets closed, there was little evidence of that yet, with no mention of Evergrande`s troubles in major Chinese state media.

Evergrande, struggling for cash, owes $305 billion and investors are on edge at the risk a messy failure reverberates through China`s property sector and everything exposed to it - primarily banks and then the broader economy.

China`s yuan steadied in offshore trade to recoup some of the losses that sent it to a three-week low on Monday. Evergrande shares fell 4% as focus there shifts to Thursday when the company is due to make bond interest payments.

"There is market caution," said George Boubouras, head of research, at K2 Asset Management in Melbourne.

"However the profit and earnings cycle is far from a bear market," he said. "Evergrande is a sentiment issue, no doubt. But no Lehman event ... it will be addressed, bailed out or restructured if it becomes a notable mainland China problem."

The next few days present yet more tests, with the Federal Reserve concluding a two-day meeting on Wednesday and likely to offer some guidance on the tapering outlook and with Evergrande due to meet its bond interest payments on Thursday.

In the currency market, traders took solace from the relative calm in Hong Kong after Monday`s plunge.

Investors are looking for the tapering timeline on its bond purchases as well as its board members` long-term rates and economic projections.

"I think the Fed will calm things down and I guess defer their tapering decision till November, said Jarrod Kerr, chief economist at Kiwibank.