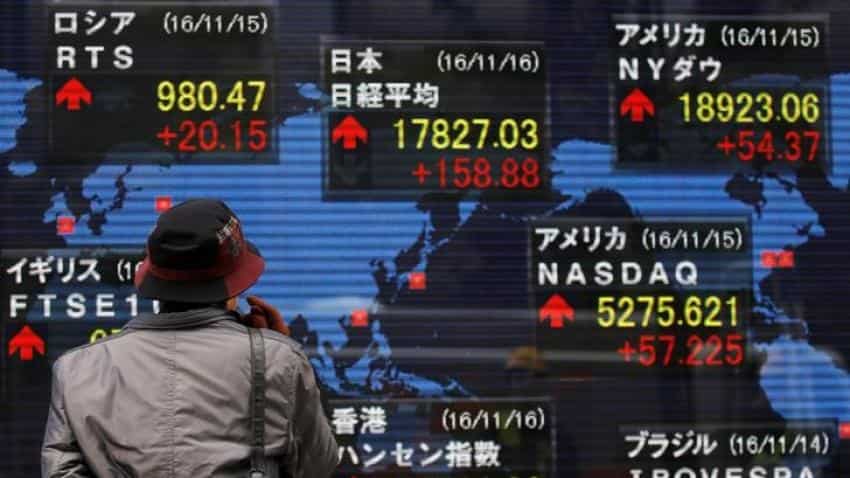 A man looks at an electronic board showing the stock market indices of various countries outside a brokerage in Tokyo. Image Source: Reuters

The dollar on Friday stood near a 14-year peak, bond yields were highly elevated and Asian stocks struggled for traction as global markets continued adjusting to the idea of higher US interest rates.

In a move that reverberated across the financial markets, the US Fed on Wednesday raised rates for the first time in a year and hinted at three hikes to follow in 2017, up from the two projected in September.

The greenback was lifted as the notion of the Fed tightening monetary policy next year more quickly than first thought took the benchmark US Treasury 10-year yield to highs not seen in two years.

Tracking the rise in the US 10-year note`s yield, Japan`s 10-year government bond yield rose to an 11-month peak of 0.10% . That gain is expected to test the Bank of Japan`s (BOJ) resolve to keep the yield around zero percent.

Asian stocks were mixed, reflecting the differing fortunes for developed and emerging market economies faced with higher US interest rates.

"Emerging market countries have been hit the hardest by capital leaving in search of higher yields and return along with the growing cost of paying back dollar denominated debt," wrote Kathy Lien, managing director of FX strategy at BK Asset Management.

Japan`s Nikkei climbed to a one-year high on a weaker yen and gains on Wall Street overnight. US shares rose on Thursday, brushing off the initial shock of a more hawkish Fed, led by shares of banks seen as the benefactors of higher rates.

MSCI`s broadest index of Asia-Pacific shares outside Japan dipped a fraction after falling 1.8% on Thursday. The broader emerging market stock index was down 1.6%.