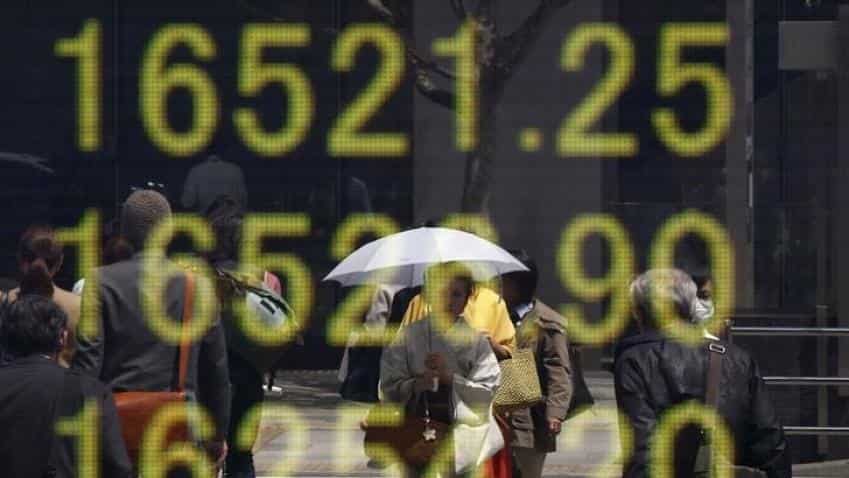 Woman clad in a kimono is reflected in an electronic board displaying Japan''s Nikkei share average outside a brokerage in Tokyo. Image Source: Reuters

Market anxiety deepened in recent sessions after the Federal Bureau of Investigation (FBI) on Friday said it was investigating newly discovered emails that might relate to democratic presidential candidate Hillary Clinton's use of a private email server when she was secretary of state.

MSCI's broadest index of Asia-Pacific shares outside Japan was down 0.14% in early trades, its lowest levels in since September 19. October marked the first monthly loss for the index since May.

Investor trepidation was captured in a broad gauge measuring volatility, which was at its highest levels in a month. The focus on the day turns to twin China factor PMI surveys due shortly, while later in the day Bank of Japan (BoJ) decides on policy, followed by a US Federal Reserve rates review on Wednesday.

The November 8 election in the United States (US) remained a key concern for markets. Clinton is viewed as the candidate of the status quo, while there is greater uncertainty over what a victory for her Republican rival Donald Trump might mean for US foreign policy, international trade deals and the domestic economy.

Australian shares were down in early trade ahead of a central bank meeting due at 0330 GMT where analysts widely expect rates to stay on a record low of 1.5%.

"Despite the soft underbelly in last week’s CPI report, the Reserve Bank of Australia is likely to make few changes to its statement as it continues to balance the weak underlying inflation pulse with rising financial stability concerns," ANZ strategists wrote in a daily note.

The Bank of Japan (BoJ) is expected to maintain monetary settings and its projection of a moderate economic recovery on Tuesday, even as weak consumption and external headwinds force it to concede that inflation will remain distant from its target for years to come.

Broad-based weakness in equities bolstered bond prices with US Treasury bond yields falling across the board with two to 30-year yields slipping between two to four basis points. In early Asian trade, Japanese and Australian bond yields also pushed lower.

Foreign exchange markets were a more quieter place with major currencies hemmed in narrow trading ranges. The dollar index, which tracks the greenback against a basket of six global peers, was flat around 98.41 after a solid run since September.

The Organisation of the Petroleum Exporting Countries (OPEC) approved a document on Monday outlining its long-term strategy, a sign its members are achieving consensus on managing production.

But OPEC representatives have achieved little otherwise, failing to reach any specific terms, and sources said Iran has been reluctant to even freeze output.