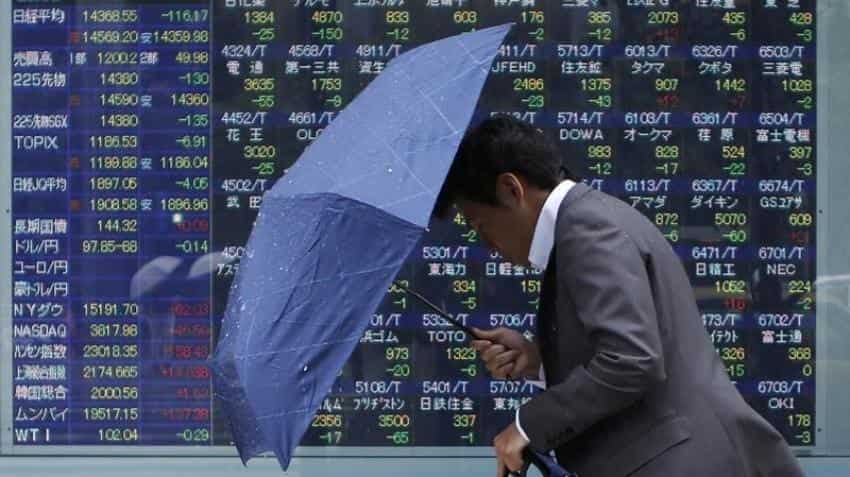 Appetite for stocks and the euro ebbed on Tuesday as political and economic uncertainty sent investors sheltering in the Japanese yen and gold, while expectations China`s foreign exchange reserves had fallen for a seventh month added to nervousness.

MSCI`s broadest index of Asia-Pacific shares outside Japan was little changed in early trade. Japan`s Nikkei dropped 0.6% as a stronger yen depressed stocks. Investors expected China to say on Tuesday that its foreign exchange reserves fell for the seventh straight month by about $10.5 billion to $3 trillion in January.

But some said reserves may have actually risen due to tighter controls on moving money out of the country, as well the impact of a weaker dollar.

Nevertheless, as reserves remain at around $3 trillion, concerns linger over the speed at which China has depleted its resources to defend the currency. Overnight, both US and European stocks dropped.

Wall Street dipped as much as 0.2%, led lower by the energy sector as oil prices fell, with investors still waiting for details of President Donald Trump`s economic policies.

"The longer Congress and the Trump administration dither on fiscal stimulus, the less likely in everyone`s estimation that it will come to pass," said Aaron Kohli, an interest rate strategist at BMO Capital Markets in New York.

In Europe, declines followed the presidential campaign launch of far-right National Front Leader Marine Le Pen on a platform pledging to flight globalisation and take France out of the European Union.

"Despite the reaction in the French yields, polls show Le Pen would finish runner up by a wide margin to either Independent Emmanuel Macron or Republican Francois Fillon," James Woods, global investment analyst at Rivkin Securities in Sydney, wrote in a note.

The euro slipped 0.1% to $1.0738 early on Tuesday. On Monday, it touched a near one-week low before closing down 0.3%. The dollar was little changed at 111.765 yen on Tuesday, failing to recover any of its 0.9% loss from Monday, as investors took refuge in the safe-haven yen.

The dollar index, which tracks the greenback against a trade-weighted basket of its peers, fared better, holding on to an increase of almost 0.1% from Monday at 99.907.

Oil prices inched higher early on Tuesday after posting their biggest one-day loss since Jan. 18 on Monday, reflecting worries that rising oil supply out of the United States would outweigh OPEC output curbs.

US crude gained about 0.35% to $53.20, after falling 1.5% on Monday. Gold surrendered some of Monday`s strong gains but hovered close to its three-month high hit on the day.