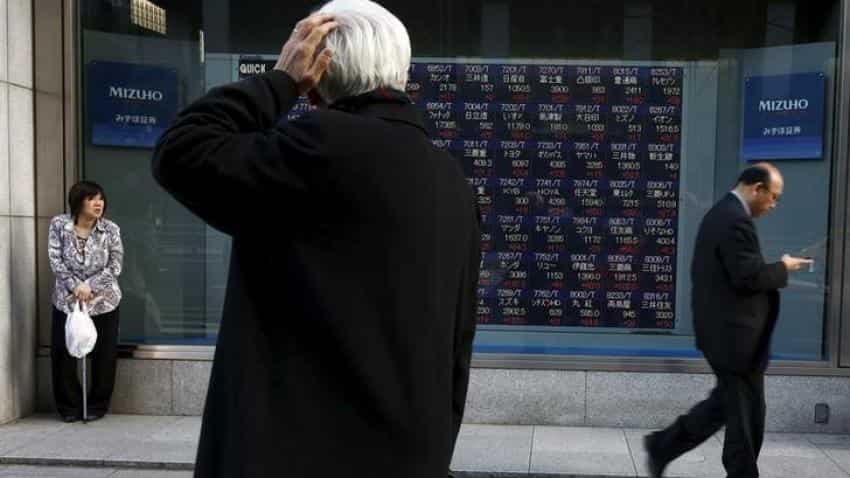 A man looks at an electronic board showing market indices outside a brokerage in Tokyo. Image Source: Reuters

Australian stocks were flat, South Korea`s KOSPI added 0.2 percent and Japan`s Nikkei was last up 0.4 percent after reaching its highest level since late 1991.

U.S. stocks jumped on Wednesday and the Dow closed above 26,000 for the first time as investors` expectations for higher earnings lifted stocks across sectors.

"And bullish U.S. stocks, higher Treasury yields and signs of the euro`s recent surge running its course are all dollar-supportive factors," Ishikawa said.

Near-term market focus was on China`s gross domestic product data due at 0700 GMT. Analysts polled by Reuters expect the world`s second-largest economy to have grown 6.7 percent in the October-December quarter from a year earlier, slowing from a rise of 6.8 percent in the previous quarter.

"The downward trend is clear. We expect investment to come under pressure this year but we are relatively optimistic about consumption and exports," said Li Huiyong, an economist at Shenwan Hongyuan Securities in Shanghai.

The dollar index against a basket of six major currencies was 0.4 percent higher at 90.878 after pulling back overnight from a three-year low of 90.279 set earlier in the week.

The euro was little changed at $1.2188, slipping from a three-year peak above $1.2300 after some ECB officials voiced worries about the currency`s strength. The common currency had advanced this month on expectations that the central bank would take steps towards winding back on stimulus measures to normalise monetary policy.

The Australian dollar dipped slightly to $0.7959 after being nudged off a four-month high of $0.8023 the previous day.

The two-year Treasury yield hovered near a nine-year high of 2.051 percent reached on Wednesday on expectations the Federal Reserve will continue to tighten monetary policy this year.

Despite the gains, many analysts are warning that the recent oil price rally may lose momentum.

"We reckon that the upside is now limited for oil prices. U.S. shale oil output will increase by a good 111,000 barrels per day (bpd) next month to 10 million bpd, and will rise to about 11 million bpd by the end of next year," said Fawad Razaqzada, market analyst at future brokerage Forex.com.

"This would put the U.S. on par with Saudi Arabia and Russia`s output," Razaqzada said.