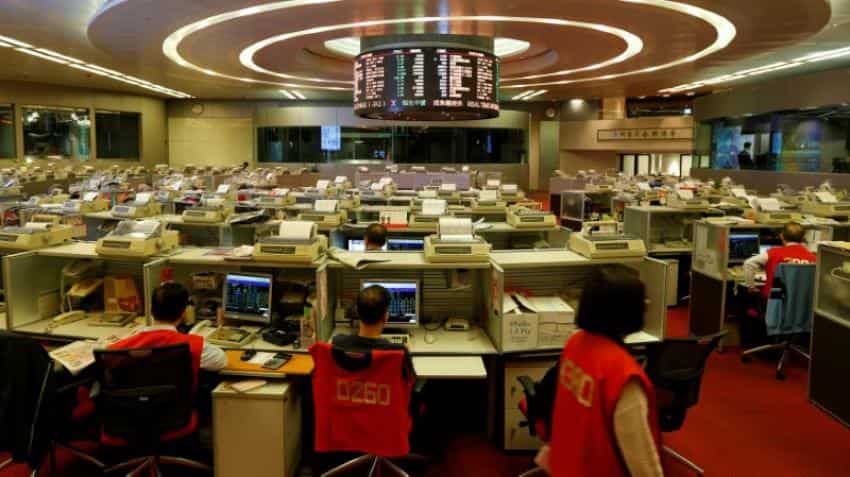 Floor traders at work during the launch of Shenzhen Connect at the Hong Kong Exchanges in Hong Kong. Photo: Reuters
Written By: Reuters
RELATED NEWS

Asian stocks slipped on Friday but showed signs of steadying as the dust began to settle after the Federal Reserve`s hawkish policy statement, while investors looked to see how Chinese financial markets would react to a downgrade on the nation`s credit rating.

MSCI`s broadest index of Asia-Pacific shares outside Japan handed back earlier gains and was down 0.1 percent after falling 0.7 percent the previous day.

The index had risen to a decade high on Tuesday, lifted as Wall Street advanced to record highs, before moving off that peak after the Fed heightened expectations for a third interest rate hike this year.

"It is difficult to pass a verdict on the Fed`s stance until it actually starts its balance sheet reduction and the markets can gauge its effects," said Kota Hirayama, senior economist at SMBC Nikko Securities in Tokyo.

"Fundamentals continue to support emerging markets including those in Asia, although the Fed`s latest stance did add a layer of uncertainty going forward."

Focus was also on how the Chinese financial markets would react to a downgrade to China`s credit rating when they open.

S&P Global Ratings downgraded China`s long-term sovereign credit rating on Thursday, less than a month ahead of one of the country`s most sensitive political gatherings, citing increasing risks from its rapid build-up of debt.

The S&P 500 lost 0.3 percent, snapping a four-day winning streak, the Dow fell 0.25 percent and Nasdaq  dropped 0.5 percent on Thursday as the U.S. equity market braced for a third interest rate hike this year. The United States ordering new sanctions against North Korea was also seen to have weighed on Wall Street.

The Aussie was hurt after Reserve Bank of Australia Governor Philip Lowe said on Thursday that the central bank does not have to follow a general move globally to raise interest rates. A sharp drop in the price of iron ore, Australia`s main export commodity, to a two-month low, has also weighed on the currency.

The dollar index against a basket of six major currencies was effectively flat at 92.169 after slipping about 0.4 percent overnight. It has gained 0.3 percent on the week.

Crude oil prices were little changed amid a wait-and-see mood as ministers from the Organisation of the Petroleum Exporting Countries, Russia and other producers meet later on Friday to discuss a possible extension of the 1.8 million barrels per day (bpd) of supply cuts to support prices.

While many analysts expect an extension of the deal beyond next March, a number of them also said that prices have risen high enough to tempt countries to boost production above agreed levels.