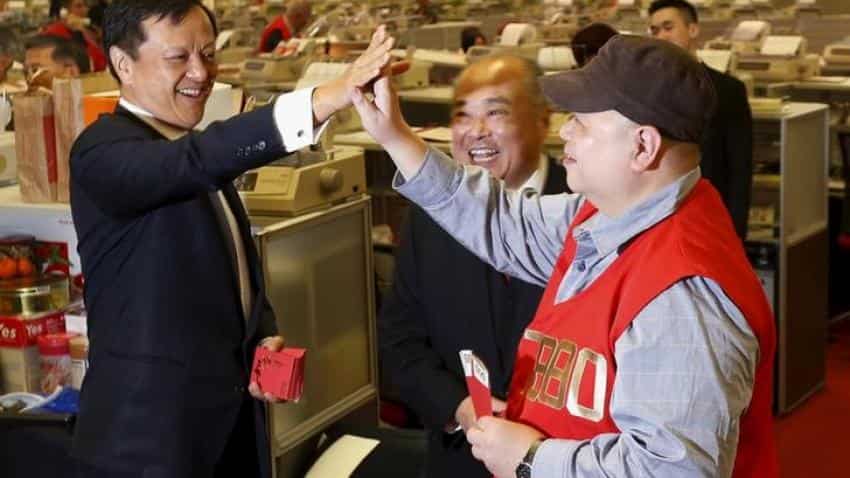 Asian stocks mostly rose on Monday, spurred by record high closes for the Dow and S&P 500 on bets that the Federal Reserve`s policy will remain accommodative following lacklustre U.S. data, which sent the dollar reeling to a 10-month low.

Chinese stocks fell over 2 percent in early trade but recouped some of the losses after data showed the economy grew at a slightly faster than expected pace of 6.9 percent in the second quarter thanks to robust industrial output and retail sales.

MSCI`s broadest index of Asia-Pacific shares outside Japan advanced 0.2 percent on Monday. Japanese markets were closed for a holiday.

Wall Street closed higher on Friday, after data showed consumer prices were unchanged in June and retail sales fell for a second straight month, pointing to tame inflation and subdued expectations of strong economic growth in the second quarter.

The chances of a rate hike in December fell to 43.1 percent after the data came out from 55 percent late Thursday, according to the CME Group`s Fedwatch tool.

The dollar index, which tracks the greenback against a basket of trade-weighted peers, hit a 10-month low early on Monday. It was trading flat at 95.156 after losing 0.6 percent on Friday.

"With less than a 50 percent December rate hike probability priced in, and with no supportive Fed speak on the calendar before July 26th, the dollar could struggle."

The dollar was also steady at 112.55 yen early on Monday, after closing down 0.6 percent on Friday.

The Bank of Japan is expected to keep its monetary policy settings unchanged when it meets on Wednesday and Thursday.

The weakness in the dollar saw other currencies soar, with the Australian dollar hitting its highest level in over two years and the Canadian dollar touching a one-year high early on Monday.

The euro slipped slightly to $1.14615, but remained close to its highest in a year hit last week, after gaining 0.6 percent on Friday.

The dollar`s loss was gold`s gain, with the precious metal rising on Friday. Spot gold was 0.2 percent higher at $1,231.01 an ounce.