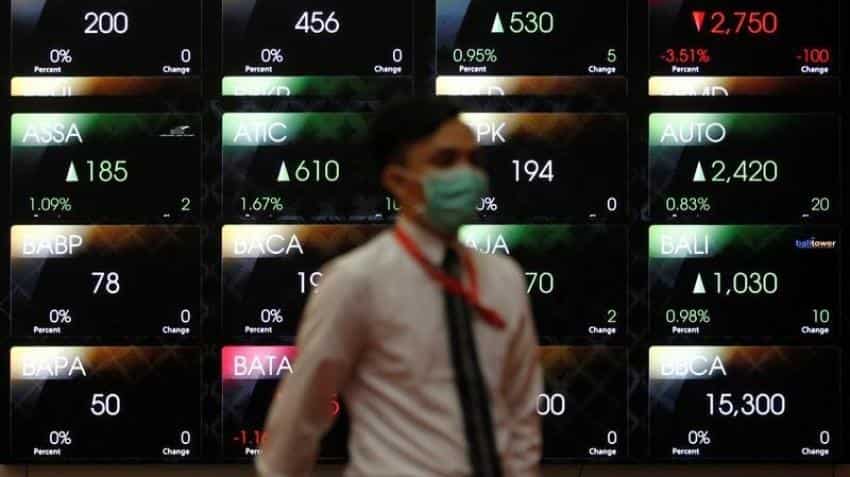 Japan`s Nikkei bounced back 0.3% a day after it hit a two-week low. Photo: Reuters
Written By: Reuters
RELATED NEWS

Asian shares dipped from four-month highs on Wednesday and the euro was pressured as lingering political and economic uncertainty in the United States and Europe sapped investor confidence.

Japan`s Nikkei bounced back 0.3% a day after it hit a two-week low. On Wall Street, the S&P 500 ended barely higher while the Nasdaq managed to scratch out a new record as gains in big tech names countered energy declines.

With more than half of the S&P 500 having reported results, fourth-quarter earnings are on track to have climbed 8.2%, which would be the best performance since the third quarter of 2014, according to Thomson Reuters.

A raft of strong global economic data and hopes that US President Donald Trump`s stimulus measures will boost US economic growth had all helped to support world share markets, and the dollar, since late last year.

But some of the moves Trump took since he was sworn in on Jan. 20 have spread anxiety in financial markets, including protectionist measures on international trade and controversial steps to tighten entry to immigrants from selected countries.

"Corporate earnings have been pretty good so far. But without details of Trump`s economic policies, it is hard to become bullish," said Masahiro Ichikawa, senior strategist at Sumitomo Mitsui Asset Management.

Uncertainty on the new administration`s currency policy is also keeping foreign exchange markets on edge. The dollar has been steadily declining against the yen since Trump signalled displeasure with Japan`s currency stance on Jan. 31.

The pair may see limited moves for now as traders look to a meeting between Trump and Japanese Prime Minister Shinzo Abe on Friday.

The euro, on the other hand, shed 0.6% on Tuesday and last stood at $1.0682, hit by rising concerns that the far right could win France`s presidential vote and take the country out of the euro.

The gap between French and German 10-year borrowing costs widened to 78 basis points, the biggest level since late 2012.

Support for conservative challenger Francois Fillon, who was seen as a shoo-in only a few weeks ago, has tumbled in the wake of a financial scandal, losing ground to independent centrist Emmanuel Macron and the anti-EU National Front leader Marine Le Pen.

While most investors expect Le Pen to be defeated in the run-off by a more moderate candidate, markets are nervous after last year`s experience of the Brexit referendum and Trump`s victory.

In addition, wrangling over Greece`s bailout are starting to haunt the market ahead of the euro group meeting on Feb. 20, with two-year Greek debt yield soaring to near 10% on Tuesday, compared to around 6% just about two weeks ago.

Oil prices fell to their lowest levels in more than two weeks, as growing crude stockpiles in the United States pointed to a burgeoning revival in US shale production, complicating efforts by OPEC and other producers to reduce a supply glut. Brent crude settled down 1.2% at $55.05 a barrel on Tuesday.

US crude trade at $51.38 per barrel, falling 1.5% in Asian trade on Wednesday, hitting its lowest level in almost three weeks. It has lost 4.5% so far this week.