Apple said it returned more than $21 billion to shareholders during the fiscal third quarter, including $17 billion in share repurchases. It declared a dividend of 77 cents per share. 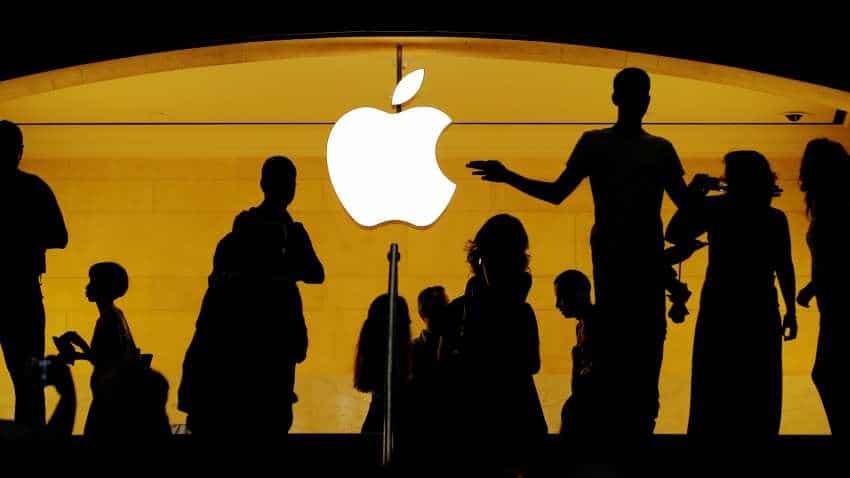 Apple`s most important products, such as the iPhone, are primarily made in China but so far have avoided tariffs. Image source: Reuters
Written By: Reuters
RELATED NEWS

Apple Inc`s quarterly profit and revenue beat Wall Street targets on Tuesday and its forecast for fourth-quarter sales topped expectations as well, with Chief Executive Tim Cook telling Reuters that "marked improvement in greater China" drove the results. Services revenue in the fiscal third quarter rose 12.6% to $11.46 billion, a new record, but missed expectations of $11.73 billion, according to IBES data from Refinitiv.

Apple CEO Tim Cook told Reuters that after factoring out a one-time payment from lawsuits a year ago and foreign-exchange effects, the services segment growth rate would have been 18%. iPhone sales fell 12% to $25.99 billion, about in line with expectations of $25.96 billion, according to Refinitiv data. Apple shares were up 3.5% to $216.10 in after-hours trading after the news.

Trade tension between the United States and China have weighed heavily on Apple because it has slowed down economic growth in China, a major market for Apple. Apple effectively cut iPhone prices in China earlier this year after currency exchange rates had made its phones too expensive for many Chinese consumers.

Apple said it expects revenue for the current fiscal fourth quarter of between $61 billion and $64 billion, compared with analyst estimates of $61.02 billion.

For the fiscal third quarter ended in June, Apple reported a 1% rise in revenue to $53.8 billion and a 7% drop in earnings per share to $2.18, compared with expectations of $53.39 billion and $2.10 per share, according to Refinitiv data.

"In regards to iPhone, the most important thing for us is that we continue to grow the installed base," Cook told Reuters. "And we did that on iPhone. And so the fact that people are hanging onto them a little longer, it`s not something I worry about in the 90-day clock."

Apple did not give the number of active Apple devices, but in January said it was 1.4 billion, with 900 million of those being iPhones. Investors used the number, called the installed base, as a proxy for how many subscribers it can gain for its services business. In April, Apple disclosed that it has 390 million paid subscribers to its own services and third-party apps. The company has set a goal of 500 million by 2020.

TRADE TENSION STILL LOOMS LARGE
Apple reported results as U.S. and Chinese trade negotiators met in Shanghai for their first in-person talks since a G20 truce last month, after which U.S. President Donald Trump said he would not impose new tariffs on a final $300 billion of Chinese imports if China agreed to make purchases of U.S. agricultural products.

Apple`s most important products, such as the iPhone, are primarily made in China but so far have avoided tariffs. But the iPhone would be included in the final $300 billion round as it is currently written.

"I don`t know what the journey will be, but over time I`m optimistic that we`ll all get to a good conclusion and everybody will win from it," Cook told Reuters when asked about the trade talks.

Apple`s market share in China declined to 5.8% from 6.4%, according to market research firm Canalys, in part because smartphone rival Huawei Technologies Co Ltd [HWT.UL] gained market share to become the top handset seller in the country.

But Apple experienced a smaller market share loss than competitors such as Xiaomi Corp <1810.HK>, Oppo and Vivo, according to Canalys data. Cook said that iPhone price adjustments, plus the Chinese government`s move to cut phone taxes, helped keep iPhone sales in China from eroding further.

"Our trade-in and financing programs are doing extremely well in China," Cook told Reuters. "Because of the active installed base is growing in China, our services business is doing very well, growing double digits."

Apple shares have gained more than 20% since early June, when shares dropped on news that the U.S. Department of Justice had jurisdiction over the company in a potential probe as part of a broader review of whether technology giants engage in anticompetitive practices.

The Justice Department formally announced the review last week but did not name any companies that would be scrutinized.
Officials said the efforts would focus on “search, social media, and some retail services online,” an apparent reference to Alphabet Inc , Amazon.com Inc and Facebook Inc rather than Apple specifically.

But Apple has faced complaints from competitors and developers over its practice of keeping 15% to 30% of revenue earned by developers on its App Store. In March, Spotify Technology SA , Apple`s chief rival in the streaming music space, filed an antitrust complaint against Apple with European Union officials.

Apple`s services, which include Apple Music, the App Store and iCloud, are seen as a source of growth for Apple as iPhone sales have slowed. In the coming months Apple plans to release a credit card and subscription services for gaming and television.

Apple said revenue for its "Wearables, home and accessories" segment that contains devices like the Apple Watch and AirPods was $5.53 billion, compared with analyst estimates of $4.81 billion.

Apple said it returned more than $21 billion to shareholders during the fiscal third quarter, including $17 billion in share repurchases. It declared a dividend of 77 cents per share.