Two in three of the SPD`s rank and file voting in a make or break referendum backed a new partnership with Merkel`s conservatives, heralding an end to the political stalemate that has plagued Europe`s biggest economy since September`s inconclusive elections 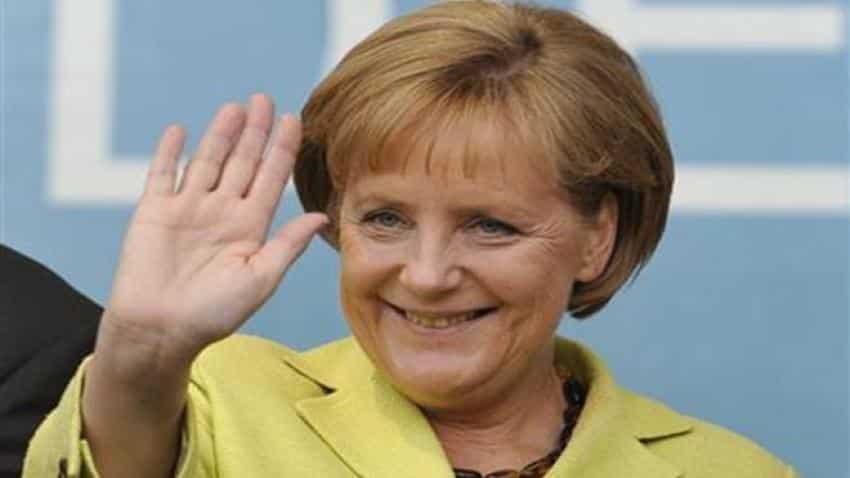 But theAngela Merkel, in power for 12 years, has had to pay a high price to coax the reluctant Social Democratic Party (SPD) back into another loveless "grand coalition". Image source: Reuters
Written By: AFP
RELATED NEWS

Chancellor Angela Merkel on Sunday vowed to work with the Social Democrats for the "good of Germany", after the centre-left party agreed to join her new coalition, but the veteran leader will go into her fourth term with weaker cards than before. Two in three of the SPD`s rank and file voting in a make or break referendum backed a new partnership with Merkel`s conservatives, heralding an end to the political stalemate that has plagued Europe`s biggest economy since September`s inconclusive elections.

But the chancellor, in power for 12 years, has had to pay a high price to coax the reluctant Social Democratic Party (SPD) back into another loveless "grand coalition". Congratulating the SPD for its "clear result", Merkel said using her CDU party`s Twitter account that she was looking forward to "further cooperation for the good of our country". Stung by their worst post-war results, the SPD had initially ruled out another four years under Merkel`s shadow.

But after Merkel`s attempt to cobble together a government with two smaller parties failed, the SPD relented. With the party riven over its way forward, its leadership promised its more than 460,000 members the final say on any coalition deal.
"We now have clarity. The SPD will be in the next government," said SPD`s caretaker chairman Olaf Scholz, adding his party plans to send three male and three female ministers to the cabinet.

European partners waiting impatiently for post-war Germany to end its longest stretch of coalition haggling heaved a sigh of relief, with French President Emmanuel Macron calling the SPD decision "good news for Europe." "France and Germany will work together starting in the coming weeks to develop new initiatives for advancing the European project," Macron`s office said.

In a nod to the the abbreviation "GroKo" as the grand right-left coalition is known in Germany, European Commission vice president Frans Timmermans wrote on Twitter: "GroGO! For solidarity in Germany and EU!" Following the SPD`s emphatic decision for a new partnership, Merkel is expected to launch her fourth government by mid-March.But the long-serving leader faces a far rockier road ahead than in the last four years.

Unlike in their previous partnership when Merkel`s conservatives and the SPD enjoyed a crushing majority, this time they now have only a slim 56 percent (399 out of total 709) of seats in parliament. Both sides had been weakened as voters angry about the arrival of more than a million asylum seekers in Germany since 2015 turned to the far-right party Alternative for Germany (AfD). Noting that it would be the biggest opposition party now that the SPD has joined the government, the AfD`s parliamentary group leader Alice Weidel promised that "the bill will come at the latest in 2021."

Wary of ceding further ground to the far-right Islamophobic outfit as voters turn away from traditional parties, Merkel`s conservatives and the SPD have inserted a clause to review their cooperation in two years. Dissenting voices in the SPD also promise to keep the long-time partners on their toes.
The SPD`s youth chief Kevin Kuehnert, who ran an impassioned campaign against the planned coalition known as "GroKo", expressed disappointment at Sunday`s vote result.

"When criticism is necessary, then it will come from us," he vowed, adding that young Social Democrats won`t rest until there is a "fundamental renewal" in the party. Within her ranks too, Merkel, who once seemed invincible, is looking increasingly vulnerable as calls grow louder for change.Opponents of her liberal refugee policy have grown more outspoken, while the conservative wing of her party is seething at having lost control of the powerful finance ministry to the Social Democrats as part of the coalition deal.

For the chancellor,who is under pressure within her party to rejuvenate her ranks, the clock is essentially ticking to groom her successor. In a bid to tamp down criticism, Merkel has brought one of her most outspoken CDU critics, Jens Spahn, into her next cabinet as health minister. Spahn, 37, a former deputy to hardliner Wolfgang Schaeuble at the finance ministry, has repeatedly slammed Merkel`s centrist policies, particularly on immigration.

He has also advocated a sharp conservative shift in a bid to woo back voters from the AfD, which garnered nearly 13 percent in the September election. Announcing the new line-up, Merkel called Spahn "a representative of the younger generation" who would play a constructive role. But crucially, at a congress this week, her party also formally appointed its new general secretary, Annegret Kramp-Karrenbauer, tapped by Merkel to kickstart the renewal process. Sueddeutsche daily noted that "she is the one who has made it clear that the CDU is now no longer without a successor for Merkel".