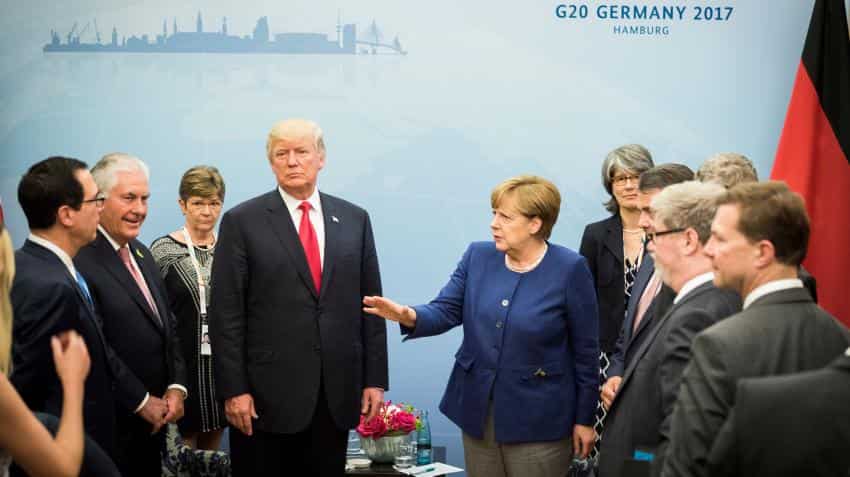 U.S. President Donald Trump and Russian President Vladimir Putin are set to size each other up in person for the first time on Friday in what promises to be the most highly anticipated meeting on the sidelines of the G20 summit.

Trump has said he wants to find ways to work with Putin, a goal made more difficult by sharp differences over Russia`s actions in Syria and Ukraine, and allegations Moscow meddled in the 2016 U.S. presidential election.

That means every facial expression and physical gesture will be analysed as much as any words the two leaders utter as the world tries to read how well Trump, a real estate magnate and former reality television star, gets along with Putin, a former spy.

The fear is that the Republican president, a political novice whose team is still developing its Russia policy, will be less prepared than Putin, who has dealt with the past two U.S. presidents and scores of other world leaders.

"There`s nothing ... the Kremlin would like to see more than a (U.S.) president who will settle for a grip and a grin and walk away saying that he had this fabulous meeting with the Kremlin autocrat," Representative Adam Schiff, the top Democrat on the House of Representatives` Intelligence Committee, said in an interview on MSNBC.

As investigations at home continue into whether there was any collusion between Trump`s presidential campaign and Russia the U.S. president has come under pressure to take a hard line against the Kremlin.

Moscow has denied any interference and Trump says his campaign did not collude with Russia.

On Thursday, Trump won praise from at least one Republican hawk in the U.S. Congress after his speech in Warsaw in which he urged Russia to stop its "destabilising activities" and end its support for Syria and Iran.

"This is a great start to an important week of American foreign policy," said Republican Senator Lindsey Graham, who has often been critical of Trump on security issues.

But earlier in the day, Trump declined to say definitively whether he believed U.S. intelligence officials who have said that Russia interfered in the 2016 election.

Ahead of Trump’s meeting with Putin, three U.S. senators wrote to Trump to express “deep concern” about reports that his administration planned to discuss the return to Russia of diplomatic compounds in Maryland and New York that were seized by the Obama administration last year in response to alleged Russian election meddling.

Republican Senators Johnny Isakson and Marco Rubio and Democratic Senator Jeanne Shaheen said returning the facilities would "embolden" Putin and encourage further efforts by Russia to interfere in Western elections. All three are on the Senate Foreign Relations Committee.

The White House declined to offer details on what Trump would request of Putin and what he might offer in exchange for cooperation.

U.S. Secretary of State Rex Tillerson said Trump wanted to talk about how the two countries can work together to stabilise war-ravaged Syria.

"The United States is prepared to explore the possibility of establishing with Russia joint mechanisms for ensuring stability, including no-fly zones, on-the-ground ceasefire observers, and coordinated delivery of humanitarian assistance," Tillerson said before leaving the United States to join Trump in Germany.

Trump was also grappling with a response to North Korea`s successful test of an intercontinental ballistic missile, which analysts say had a long enough range to reach Alaska.

Curbing Pyongyang`s nuclear ambitions has been Trump`s most pressing foreign policy priority, and he met with leaders from Japan and South Korea on Thursday evening to discuss it. He is also slated to meet with Chinese President Xi Jinping at the G20.

"I’d like to see the president figure out how to engage Russia on North Korea,” said Representative Francis Rooney, a Republican from Florida who is on the House Foreign Affairs Committee.

"What I suggested to the president here a while back was that since we have all these conflicting issues about Russia right now and we’re still reeling from the fact that they took Crimea, maybe this is an opportunity to reset the Russia relationship in a positive manner,” Rooney said in an interview.