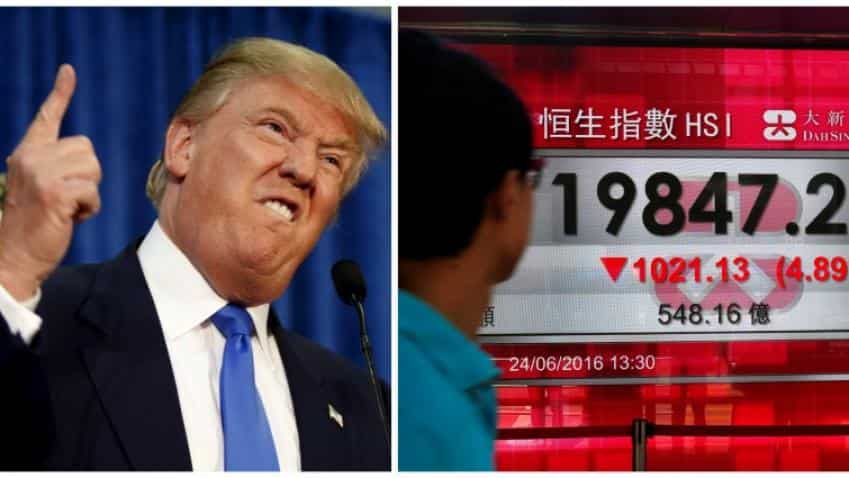 With a lot of events that took the global economy by surprise and rocked the boat in 2016, global risk consultancy – Control Risk on Tuesday published its top five risks for business in Asia Pacific in 2017.

“The unexpected US election and Brexit referendum results that caught the world by surprise have tipped the balance to make 2017 one of the most difficult years for business’ strategic decision making since the end of the Cold War,” Richard Fenning, CEO, Control Risks, said.

The top five risks in 2017 include the following:

1. The end of globalisation as Asia Pacific knows it:
The report pointed out that since the end of the Cold War, Asia Pacific has been the globe’s greatest beneficiary of the resulting vast liberalization of trade, direct investment and supply chains.

“The region’s middle classes have profited enormously from this process in a way that the middle classes of the US and Europe feel, at least more recently, that they have not. The backlash in Asia Pacific’s two biggest markets (Europe and the US) against globalization is the greatest threat to this region’s overall economic and political security over the next decade, never mind the next year,” the report added.

2. Territorial tensions:
Speaking about disputes like the Sino-Japanese dispute in the East China Sea, the status of Taiwan, the dispute over islands in the South China Sea the report said that it will result in higher military spending.

“As these ‘frozen’ conflicts have thawed, regional players like Japan, that have traditionally looked to the US for much of their security, will now begin to ‘self-insure’ against Chinese aggression by ditching its peace constitution and ramping up its military spending,” the report said.

Since there persist a lot of uncertainty over US strategic commitment to the region the report pointed out that it may also have risk to the upside with the likes of Malaysia and the Philippines attempting to hedge against this US uncertainty by moving closer to China.

“Providing China doesn’t seek to flaunt its territorial expansion, tensions in the South China Sea may actually decline, but divisions within ASEAN are likely to increase,” the report addded.

3. Populism and performance legitimacy:
From PM Modi pushing Hindu nationalism to populist gestures by Philippines, the report pointed out that political machines would ‘shore up’ with popular gestures.

“In Thailand, the Junta will distract the public from a weak economy and continued authoritarianism with appeals for unity around the new monarch. In India, the Modi government will intersperse hard choices with appeals to Hindu nationalism. In Malaysia, Prime Minister Najib Razak will continue to fight a rear-guard action against his poor standing by wooing conservative Muslims. In the Philippines, President Rodrigo Duterte, who built his mandate from the very beginning on populist gestures, will continue to skirt the country’s more intractable problems with dubious campaigns,” the report said.

4. China’s regulatory whiplash:
China would feel ‘considerable strain’ in 2017 as it is tightening its regulatory regime, the report said.

“The potential for trade disputes between most obviously the US and China (but not exclusively) could have its nastiest side effects in punitive regulation against foreign businesses,” the report said.

Data nationalism, where companies are increasingly forced to keep critical data inside the Asia Pacific jurisdictions where they operate, would be another growing concern.

“Companies are coming under pressure right across the region to do this and, at the same time, most businesses in Asia Pacific have woeful cyber security protections in place,” the report added.

5. The implications for Asia Pacific of the fragmentation of IS in Iraq and Syria:
Trained Jihadists, and the re-emergence of base areas in central Sulawesi or Mindanao would be cause for concern.

However, the report said, “…compared to the havoc caused by terrorism in the Middle East and Europe, Asia’s terrorism risk landscape has been considerably more benign – and will continue to remain comparatively so.”

Further it added, “The lines of communication are long between East Asia and the Middle East, and there is no refugee crisis to exploit and conceal within. Asia lacks the sheer numbers of individuals with the experience, access to weapons and suicidal intent on the scale of the Middle East or Europe.” 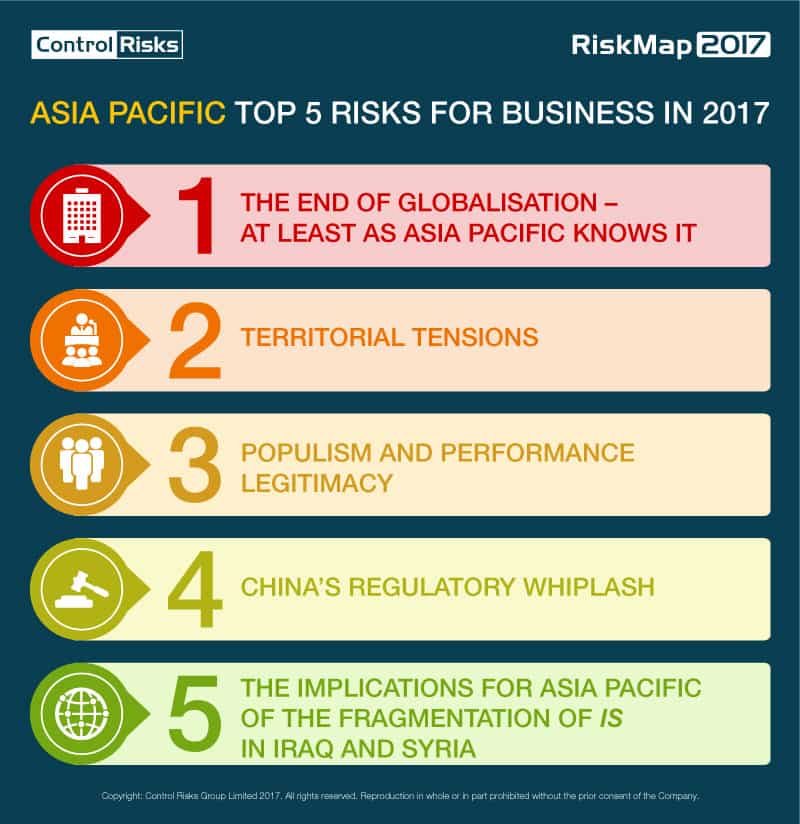 “The high levels of complexity and uncertainty attached to the key political and security issues for the year mean that boards in Asia Pacific will need to undertake comprehensive reviews of their approaches to risk management,” Control Risks CEO in Asia Pacific, Toby Latta said.