12 teens from US invent solar-powered tent for homeless

To solve the homelessness issue in the Los Angeles, about 12 teenage girls from San Fernando High School in the US have invented a solar-powered tent for the homeless people. 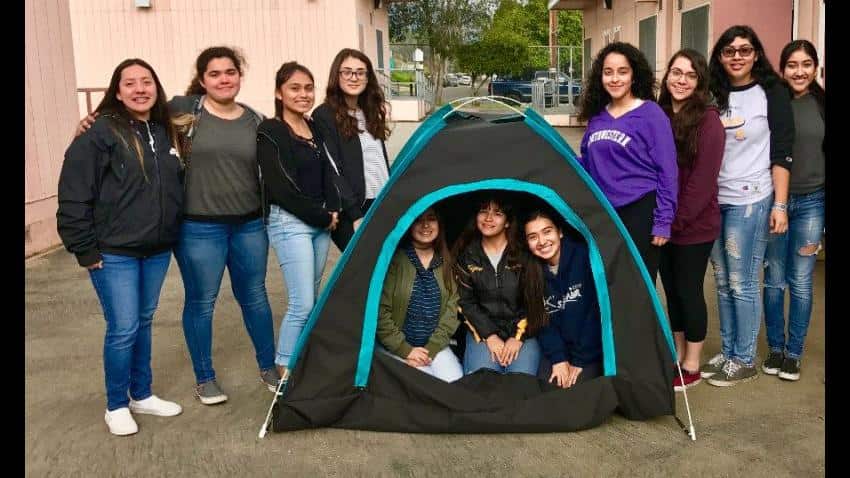 "Because we come from low-income families ourselves, we can't give them money," the report said quoting the high school senior Daniela Orozco, as saying. Representational Image. Image Source: DIY Girls/Twitter
Written By: ZeeBiz WebTeam

About 12 teenage girls from San Fernando High School in Los Angeles in the United Stated (US) have invented a solar-powered tent for the homeless, Mashable reported.

"Because we come from low-income families ourselves, we can't give them money," the report said quoting the high school senior Daniela Orozco, as saying.

It's a solar-powered tent that folds up into a rollaway backpack.

These teenagers have created this solar-powered tent with the help of YouTube, Google, and trial-and-error method.

According to them, they hope that one day, their solar-powered tent will improve the lives of people experiencing homelessness in their community.

The teen girls from San Fernando High School worked on their invention over the course of a year, cited the report.

As part of a young inventors conference, these teenage girls will present this invention at MIT on June 16 this year.

The teens, none of whom had coded, soldered, sewn, or 3D-printed before they joined forces, won a $10,000 grant from the Lemelson- Massachusetts Institute of Technology (MIT) Program to develop the invention, the report said.

According to the report, they were recruited by DIY Girls, a non-profit that teaches girls from low-income communities about engineering, math, and science, to go after the grant.

"I knew I wanted to apply for it, but I needed a team," the report said quoting Evelyn Gomez, 29, the executive director of DIY Girls, as saying.

"I went back to my calculus teacher at my high school and did a hands-on recruitment activity."

Most of the girls didn't know each other before, but they quickly became close friends, the report said.