UK may still be in EU for a long time 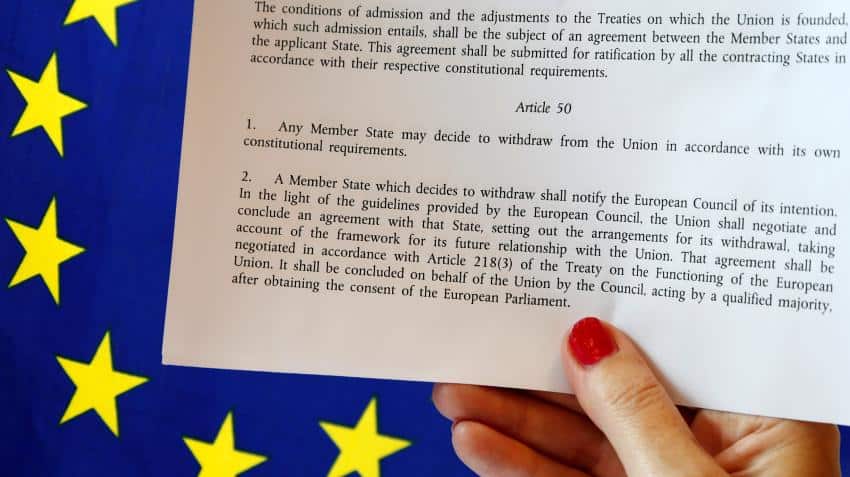 Article 50 of the Lisbon Treaty will come into force now that UK was voted to exit the EU. Photo: Reuters

The Great Britain has finally decided not to stay with European Union. The ‘Leave’ camp got 17.4 million votes or 51.9% of the total votes.

Following the poll results, Prime Minister David Cameron also announced to step down to make way for a new leader by October, adding that the new prime minister would be responsible for officially triggering Article 50 of the EU's Lisbon Treaty to start Britain's divorce from the bloc.

This means, Article 50 will not be invoked before his successor is in place, which is likely to be by October 2016.

What is European Union's Lisbon Treaty?

On December 13, 2007, the heads of state and government of the 27 EU Member States signed the Lisbon Treaty. The Treaty includes key changes aimed at increasing the consistency and coherence of the EU's external actions.

As per Lisbon Treaty official website, the treaty both strengthens and clarifies the EU's development cooperation policy and, for the first time, sets out humanitarian assistance as a specific Commission competence.

The treaty is majorly divided into two parts:

2. Treaty on the Functioning of the European Union

According to the website, under Treaty on Functioning of the European Union, it sets out the specific objectives of the EU's various policies. The specific rules governing the EU's external actions, including development cooperation.

What is Article 50 of the Lisbon Treaty?

According to the official website, this is what Article 50 say:

1. Any Member State may decide to withdraw from the Union in accordance with its own constitutional requirements.

2. A Member State which decides to withdraw shall notify the European Council of its intention. In the light of the guidelines provided by the European Council, the Union shall negotiate and conclude an agreement with that State, setting out the arrangements for its withdrawal, taking account of the framework for its future relationship with the Union. That agreement shall be negotiated in accordance with Article 218(3) of the Treaty on the Functioning of the European Union. It shall be concluded on behalf of the Union by the Council, acting by a qualified majority, after obtaining the consent of the European Parliament.

3. The Treaties shall cease to apply to the State in question from the date of entry into force of the withdrawal agreement or, failing that, two years after the notification referred to in paragraph 2, unless the European Council, in agreement with the Member State concerned, unanimously decides to extend this period.

5. If a State which has withdrawn from the Union asks to rejoin, its request shall be subject to the procedure referred to in Article 49.

Why Article 50 important?
According to a Mirror UK report, a senior EU official said,"The Article 50 process is a divorce: who gets the house, who gets the kids, who gets the bank accounts. It is spouses, instead of working through lawyers, throwing dishes at each other."

In simple terms, Article 50 includes the leaving process, which will take around two years. Though Britain will not be able to take part in any EU's decision making, but it will continue to abide by EU treaties and laws, said a Telegraph report.

During this time of two years, as per the report, UK will put forward its leaving terms in front of EU. Terms could vary from trade tariffs, financial regulations, new trade deals, movement rights for EU nationals in UK (like visa arrangements).

All the agreements will have to be approved by all 27 member states.