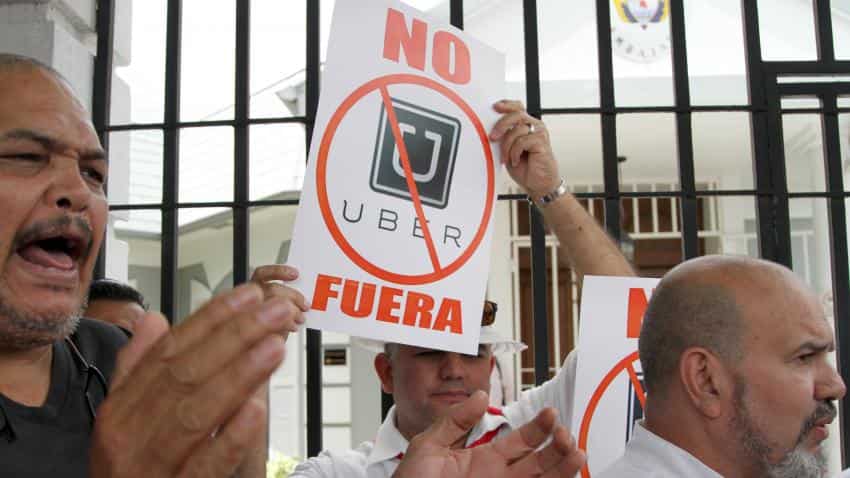 Taxi drivers take part in a protest against the transport sevice through apps like Uber, in front of Colombia's embassy to Costa Rica, in San Jose, capital of Costa Rica, July 29, 2015. Pic: (Xinhua/Kent Gilbert/IANS) (fnc)
Written By: The Conversation
RELATED NEWS

Uber, the popular ride-hailing app, just announced it has settled two class action lawsuits in California and Massachusetts in which drivers sought classification as employees and entitlement to overtime pay and more transparent handling of tips.

Under the terms of the settlement, which you may read here, Uber will pay US$84 million to be distributed among a class of 385,000 drivers (and $16 million more if the company goes public). In return, the drivers will not pursue their claim to be employees.

Uber will also make it clear that tips are not included in the price users pay and will revise its procedures for delisting drivers to give longer notice and greater transparency, including adding an appeals process. And the company will assist the creation of drivers' councils and meet with them quarterly.

So what does all this mean?

Many people who work in today’s flexible labor markets or the gig economy have issues similar to Uber drivers. They worry about where benefits will come from, how to track their compensation, how to share the benefits if the startup they work for makes it big, how to communicate with management and what labor laws apply to them.

The recent Uber settlements do not settle these big issues and questions, which I’ve been writing about for years. They don’t even settle them for Uber drivers.

Let me address a few of the biggest question marks.

Will the judges approve the settlement?

Federal district judges in Oakland and Boston will now hold hearings on the fairness of the settlement. Approval is not a foregone conclusion.

A quarter of the settlement, $21 million, will go to the lawyers. A few thousand drivers who drove the most miles during the period in question will get a few thousand dollars apiece. Most drivers will receive only a few hundred dollars. It’s not clear whether this will seem fair to the judges.

For comparison, a judge in 2015 rejected a proposed $324.5 million settlement in a case in which the government found that Apple, Adobe, Intel and Google conspired not to hire each others' employees, victimizing some 64,000 Silicon Valley employees. The judge, who cited a previous case in which far more was paid out per employee, later approved a higher settlement of $415 million.

So the judges are not guaranteed to sign off on a settlement just because the lawyers are happy with it. The Silicon Valley case involved well-compensated employees who probably lost large sums when their companies illegally locked them out of the job market.

Uber involves less well-compensated employees and smaller sums, but might, for that reason, invite even more careful scrutiny of the settlement.

Does this settle the issue of whether Uber drivers are employees or independent contractors?

Not at all. That issue will come up in other litigation. The settlement is not a precedent.

For example, the Internal Revenue Service could audit Uber and decide, as it did with Microsoft in 1990, that the drivers are actually employees for whom taxes should have been withheld.

The National Labor Relations Board is already investigating Uber. Should the Teamsters (who are interested in organizing Uber drivers) file charges claiming that Uber’s assistance to the new drivers' councils violates federal labor law, the board would have to decide whether the drivers are employees.

Employees have a legal right to form unions and negotiate set wages without employer interference. By contrast, the ability of an association of independent contractors to try and set wages is not protected by labor law and may even violate antitrust law.

In administrative proceedings like these, there would be no involvement by lawyers who anticipate millions in legal fees and thus have incentives to reach settlements, as in the Silicon Valley case and that of Uber. Such deals are much better for lawyers than for employees.

Why are such important issues of national labor policy decided in private class action lawsuits?

Good question. Americans seem to be the only people in the world who think that employees who haven’t been paid minimum wage or who are victims of discrimination should have to go to a general court rather than an administrative agency or specialized labor court. Canadians call our system the “American litigation model” and have devoted a lot of energy to making sure they don’t follow it.

A few more cases like Uber might lead employer and union advocates to join forces on administrative remedies that would be faster for workers and cut out the lawyers. I’m not aware of any such talks ongoing, so I can’t be too specific about what kind of deal might emerge.

But it would be hard to find defenders of the current practice of huge class action suits in which millions of dollars are wagered on the uncertain reactions of a jury. It is like adding a random function to a program.

Is the problem that the categories of employee and independent contractor don’t fit the new economy?

Not in my opinion. Most agree that the line between the two is vague and easy to manipulate.

Many people think we need a third, intermediate category (like dependent contractor, or independent employee.

In reference to this, earlier in the Uber litigation, the judge in California observed that the case would require the jury to decide into which of two round holes to put this square peg. At one time I thought a third category might be a good idea, but I now think it would only invite further strategic manipulation by those who hire labor, and longer jury trials to sort it out.

This settlement makes quite clear that Uber drivers are employees. Uber alone controls the listing and delisting of drivers, how they are evaluated and (most importantly) how they are compensated. Perhaps ironically, the settlement will actually help support a future ruling by the National Labor Relations Board that the drivers are in fact employees.

Of course they can set their own hours, but this is entirely compatible with employee status. So the Uber case does not seem to me to show the need for a new category. It shows that the good old category of employment still works.

Well, OK, maybe Uber drivers are employees. But isn’t the choice between employee and independent contractor still a very old-fashioned debate to be having?

Absolutely. The real issue isn’t who is an employer. The ultimate issue is who is responsible for making sure that employee wages are paid and other employment laws complied with.

State legislation increasingly imposes such legal responsibility on employers, even when they arguably don’t exercise control over an individual’s actual work – the traditional index of employer-employee status.

For example, a California court held that the retailer Forever 21 was the joint employer of the workers in the contractor factories that make its clothing, even though it has no control over hours, pay or anything else.

Massachusetts, New Jersey and other states use definitions of employment that include just about any hiring of people. California law says that customers of staffing agencies, even if they are not employers of those staff, are still responsible for payment of wages and workers compensation insurance.

These examples don’t yet add up to a coherent theory of responsibility to make sure that labor standards are observed. But they do show that such responsibility has begun to burst the boundaries of the traditional employment relationship.

Debates in employment law increasingly concern these issues of responsibility, rather than classification.

Should Wal-Mart, like Forever 21, be responsible for working conditions in the factories that make the goods it sells? Should this be a legal responsibility?

Retailers and garment manufacturers in the Accord on Fire and Building Safety in Bangladesh, including Calvin Klein and Abercrombie & Fitch, agreed to such legal responsibility after the collapse of Rana Plaza, but most U.S. retailers and manufacturers prefer to work with other organizations whose commitments are not legally enforceable.

It doesn’t yet appear to make much difference to workers in Bangladesh whether the customers for their clothes accept legal, or only moral, responsibility for building safety, though differences may emerge in the future.

These issues are difficult, but clear thinking about them requires moving beyond the old idea that only the employer with control of work has such legal responsibility.

As I said, I believe that Uber drivers are employed by Uber, and that the National Labor Relations Board will soon come to the same conclusion. But, even if I am wrong, it may not matter whether or not they are formerly employees if the law decides that Uber is responsible for observing employment law even for the independent contractors it hires.

This article was originally published on The Conversation. Read the original article.