Xiaomi to launch Redmi Note 7S on May 20: Here is what to expect 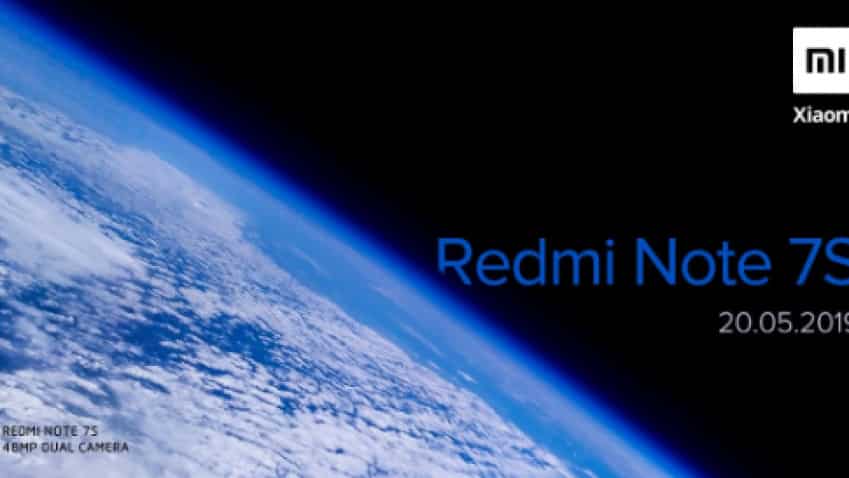 Xiaomi has confirmed that it will launch the third and latest variant in its Note series on May 20. The smartphone named Redmi Note 7S will come with a 48MP camera, confirmed Xiaomi India MD Manu Kumar Jain. "India #RedmiNote India 48MP So we've decided to get you both! #RedmiNote7S - An all-new SUPER Redmi Note for all our India Mi fans is coming! #48MPForEveryone unveils on 20th May. Mark your calendars!" he tweeted on Thursday morning.

In his another tweet from Xiaomi India's official Twitter handle, the company shared a 'stellar' space shot by Redmi Note 7S. "This is the #RedmiNote you've been waiting for!
#RedmiNote7S with a Super #48MP camera is coming on 20th May!" the tweet read.

So we've decided to get you both! #RedmiNote7S - An all-new SUPER Redmi Note for all our India Mi fans is coming! #48MPForEveryone unveils on 20th May. Mark your calendars!

The Redmi Note 7 Pro brings 48-megapixel camera to Xiaomi devices in India and the company has also moved on to 128GB storage for the first time. As the phone is expected to be the all-new SUPER Redmi Note, it will be interesting to see what else is offered.

Xiaomi’s Redmi Note 7 3GB RAM/32GB storage variant is priced at Rs 9,999. The smartphone bears 6.3-inch full HD+ display, having 4,000mAh battery, having a fingerprint sensor and more. It is powered by a Qualcomm Snapdragon 660 chipset, which is backed by up to 4GB RAM and up to 64GB storage variant which is expandable up to 256GB via a microSD card. There is a dual-camera setup on the rear side, which includes a 13-megapixel sensor and a 2-megapixel lens. On the front, the handset is equipped with a 13-megapixel snapper for capturing selfies.

Redmi Note 7 Pro comes in two variants: 4GB RAM, 64GB storage and 6GB RAM, 128GB storage. This is the first time when Xiaomi has moved to 128GB storage option. The base variant has been priced at Rs 13,999 while the other model would cost you Rs 16,999. Redmi Note 7 Pro will be available in three colour options: Neptune Blue, Nebula Red, and Space Black. Redmi Note 7 Pro comes with a 6.3-inch full-HD+ display with a 19.5:9 aspect ratio and waterdrop-style display notch that Xiaomi calls Dot Notch. It has an 11nm, octa-core Qualcomm Snapdragon 675 SoC. The smartphone runs Android 9 Pie with MIUI 10. It has a dual rear camera setup that includes a 48-megapixel primary sensor with an f/1.79 lens and a 5-megapixel secondary depth sensor. There is also a 13-megapixel camera sensor at the front. Redmi Note 7 Pro is powered by a 4000 mAh battery.