The Chinese smartphone manufacturer, Xiaomi launched two budget smartphones in India on Wednesday - the Redmi Y3 and the Redmi 7 - both priced under Rs 10,000. 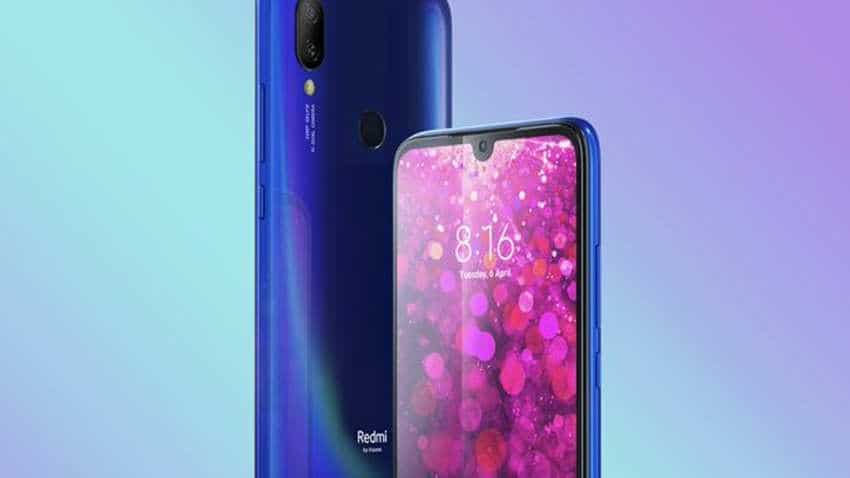 The Redmi Y3, which comes with a powerful 32MP selfie camera has been launched in India at a starting price of Rs 9,999. Source - Xiaomi.
Written By: ZeeBiz WebTeam
RELATED NEWS

The phone includes face unlock feature and a rear-mounted fingerprint sensor that sits right below the dual camera module. The 32-megapixel selfie camera sits on the dot drop notch on the top of the screen. It comes with EIS support and can shoot 1080p (FHD) video at 30fps. It also includes some special camera features like Palm shutter, Auto HDR and I portrait mode. Notably, Redmi Y3 lets users click 32MP selfie only in PRO or 32MP camera mode.

It has a 6.26-inch display with dot notch screen, 19:9 aspect ratio, and screen resolution of 1520x720p. The smartphone sports a P2i coating that will secure the phone from water drops and dust. It has Xiaomi's IR blaster, is powered by Qualcomm's Snapdragon 632 processor, comes with dual SIM slot and dedicated microSD card slot expandable upto 512GB.

The Redmi Y3 runs MIUI 10 based on Android 9 Pie. It is powered by a big 4000mAh battery which is also found in the much expensive Redmi Note 7 and Redmi Note 7 Pro. Just like the Redmi Note 7 series, Redmi Y3 too has been launched in multiple colour variants - Prism Black, Bold Red, and Elegant Blue.

The phone will go on sale beginning April 30 via Mi.com, Amazon, Mi Stores, and more.

Meanwhile, the company has also launched the Redmi 7 which is a significant upgrade over the Redmi 6. The Redmi 7 price in India will start at Rs 7,999 for the 2GB + 32GB variant. The 3GB + 32GB version will carry a price tag of Rs 8,999. The phone's first sale is scheduled for April 29 via Mi.com, Amazon, Mi Home stores, and more.

Apart from the two smartphones, Xiaomi has launched the Mi LED Smart Bulb in the country. The smart bulb supports both Alexa and Google Assistant. It will be available via a crowdfunding campaign on the company's official website beginning April 26.