Xiaomi is set to launch its first ever smartphone with a whopping 64-megapixel camera in India on October 16. This will be the second smartphone after Realme XT to sport a 64MP lens in the country. 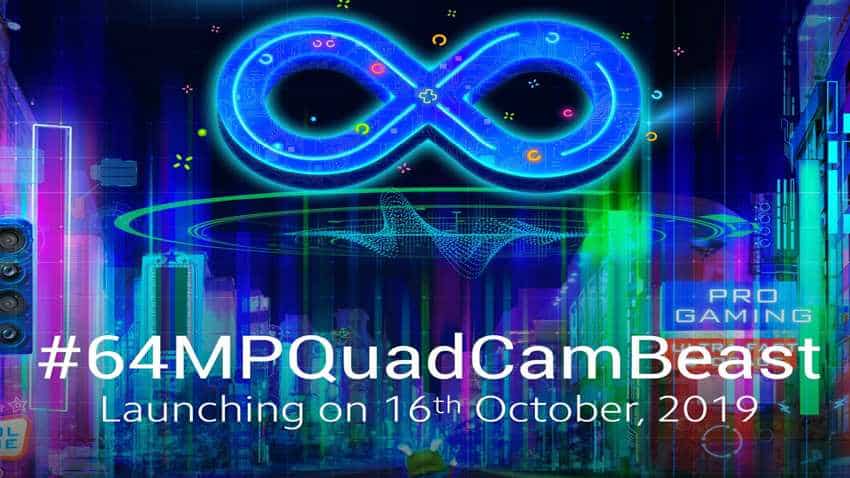 The Redmi Note 8 Pro was first unveiled in China and will be available in India right before Diwali. Source - Xiaomi India.
Written By: ZeeBiz WebTeam
Edited By: Harish Dugh
RELATED NEWS

Xiaomi is set to launch its first ever smartphone with a whopping 64-megapixel camera in India on October 16. This will be the second smartphone after Realme XT to sport a 64MP lens in the country. The Redmi Note 8 launch date in India was confirmed by the company on Wednesday, soon after it unveiled its latest budget offering Redmi 8. The company is claiming that the upcoming device will be a "64MP quad camera beast" and confirmed the launch through social media posts as well as by sending media invites. The launch event will take place in New Delhi.

The Redmi Note 8 Pro was first unveiled in China and will be available in India right before Diwali. The Redmi Note 8 Pro is Xiaomi's first smartphone to feature a 64MP quad camera setup. It uses Samsung's GW1 sensor and should be priced at around Rs 15,000 in India. In China, the phone's price starts at 1399 Yuan.

The Redmi Note 8 Pro features a 6.53-inch FHD+ LCD display with a waterdrop notch and a 91.94 per cent screen-to-body ratio. It is protected by Gorilla Glass 5 on either side and is powered by a 2GHz MediaTek Helio G90T processor. The Chinese variant of the phone comes with up to 8GB of RAM and 128GB of internal storage. It packs a 4,500mAh battery and supports 18W fast charging.

The Chinese smartphone manufacturer witnessed a great response during the recently concluded festive sale by selling over 5.3 million devices. In a statement, Xiaomi claimed that it sold over 3.8 million smartphones in India during the same period, with Redmi Note 7 series emerging as the best-selling smartphone series on Flipkart. Xiaomi was also the best-selling smartphone brand on Amazon. Xiaomi devices include Xiaomi smartphones, Mi TVs, Mi Band(s), Mi Power Banks, Mi Earphones and other Mi Ecosystem devices and accessory products.

"This festive season has been astounding for Xiaomi and we are thrilled that over 5.3 million people decided to celebrate along with us. Every year, we try to make it more joyous for our consumers by offering newer products and attractive offers. The love from millions of Mi Fans has humbled us, and the fact that over 3.8 million came to buy a Xiaomi smartphone and over 250,000 customers ordered a Mi TV warms our heart. We hope these Xiaomi purchases usher in the festive cheer for everyone and the festive cheer will continue to spread as we extend attractive offers across the entire Dussehra/Diwali period across online and offline," Raghu Reddy, Head of Categories and Online sales, Xiaomi India said.