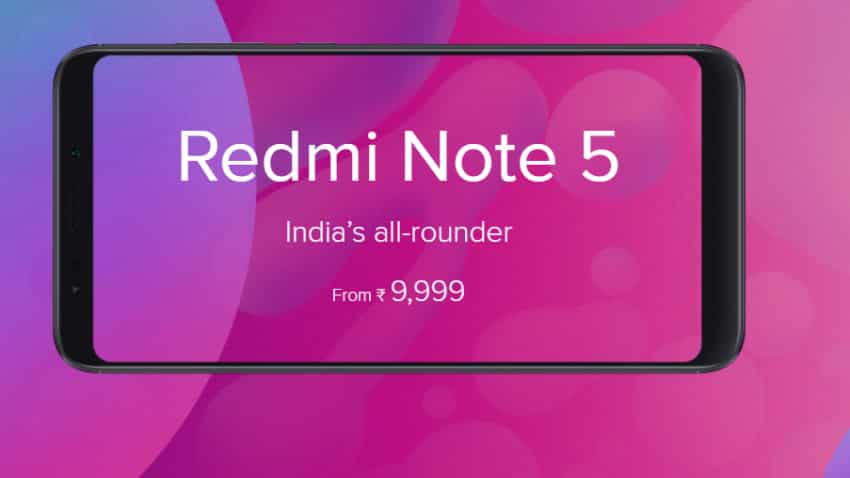 Xiaomi Redmi Note 5 sale on Flipkart, Mi.com: Chinese smartphone manufacturer Xiaomi's latest smartphone offering Redmi Note 5 is on flash sale today at Flipkart and Mi.com, from 12 PM onwards. The technology firm announced this on Twitter. “We heard you! India’s all-rounder Redmi Note 5 will go on sale at noon on mi.com & @Flipkart. #GiveMe5.” The company said that Redmi Note 5 is being made available again ‘on public demand’.

We heard you! India's all-rounder Redmi Note 5 will go on sale at noon on https://t.co/cwYEXdVQIo & @Flipkart. #GiveMe5 pic.twitter.com/Yfqpp1CCS7

The Redmi Note 5 comes in two storage and RAM combinations of 32GB/3GB and 64GB/4GB with a price tag of Rs 9,999 and Rs 11,999, respectively. The Note 5 features a 12-megapixel (MP) primary camera and a 5MP selfie shooter, along with 18:9 screens. The Note 5 is the successor to Redmi Note 4, which was announced in January last year, but has improved on many fronts. The Redmi Note 4 price in India has also been slashed by Rs 500.

Redmi Note 5's 5MP front camera is on par with its predecessor in terms of performance, but addition of LED flash on the front helps in low-light photography. The new device sports 5.99-inch fullHD+ screens with 18:9 aspect ratios, covered with reflective Gorilla Glass, which hampers sunlight visibility. The screen, which is an IPS unit, lacks both the maximum brightness level and vividness. However, rounded corners of the screen look better than pointed edges and the curved sides of the glass are stated to be easy to operate.

Apart from this smartphone, Xiaomi’s 55-inch Mi LED Smart TV 4 and Mi TV 4A (both 32-inch and 43-inch models) are also available on Mi.com and Flipkart. It may also be noted that Redmi Note 5 Pro will be available from March 21.