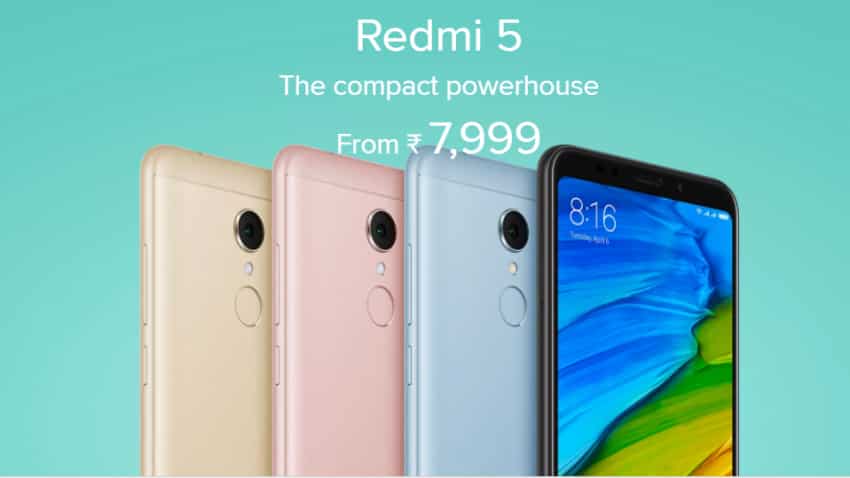 Xiaomi Redmi 5 sale starts tomorrow: Xiaomi's latest smartphone Redmi 5, which will go on sale in India from tomorrow (March 20), will come at a price tag of Rs 7,999 for 2GB RAM variant, 3GB RAM variant is reportedly priced at Rs 8,999, while 4GB RAM variant will be available at a price of Rs 10,999. Buyers can get the new device, available in Black, Gold, Lake Blue and Rose Gold colours, from mi.com, Amazon India and Mi Home Stores.

According to reports, this Chinese smartphone manufacturer has also partnered with Reliance Jio to offer instant cash back of Rs 2,200 along with 100GB of additional data. Jio members, thus are eligible for the cashback offer of Rs 2,200, and the device therefore comes at a price of Rs 5,799.

Users can avail the cashback amount through 44 cashback vouchers of Rs 50 each on the MyJio app after recharging on the Xiaomi Redmi 5. They can redeem these vouchers against future recharges done in the MyJio app, said a dna.com report.

It may be noted that SBI credit card holders can have an additional 5 percent discount on Amazon India and Mi.com if they use the card for purchasing the new device. Buying of the new smartphone will also provide 90 percent off on the first Kindle eBooks purchase.

Redmi 5 boasts of features like 5.7-inch display with a 1440 x 720 pixels resolution, powered by an octa-core Qualcomm Snapdragon 450 processor with 2GB/3GB/4GB RAM variants, 12MP rear camera with f/2.2 aperture and LED flash along with a 5MP front-facing camera with Beautify 3.0 capabilities and LED flash.

Coming in 16GB/32GB storage variants, the new device's connectivity options include 4G VoLTE, Wi-Fi, Bluetooth 4.2, GPS and a 3.5mm headphone jack, along with a 3300mAh battery.

Last week, the sale of Xiaomi Redmi Note 5 started at Flipkart and Mi.com on Friday. The Redmi Note 5 comes in two storage and RAM combinations of 32GB/3GB and 64GB/4GB with a price tag of Rs 9,999 and Rs 11,999, respectively.

The Note 5 features a 12-megapixel (MP) primary camera and a 5MP selfie shooter, along with 18:9 screens. The Note 5 is reportedly the successor to Redmi Note 4, which was announced in January last year. The Redmi Note 4 price in India has also been slashed by Rs 500.

Redmi Note 5's 5MP front camera is on par with its predecessor in terms of performance, but addition of LED flash on the front helps in low-light photography. The new device sports 5.99-inch fullHD+ screens with 18:9 aspect ratios, covered with reflective Gorilla Glass, which hampers sunlight visibility. The screen, which is an IPS unit, lacks both the maximum brightness level and vividness. However, rounded corners of the screen look better than pointed edges and the curved sides of the glass are stated to be easy to operate.