Xiaomi Redmi 4A flash sale goes out of stock within minutes

The sale which began at 12 noon ended within 2 minutes of it going on sale. 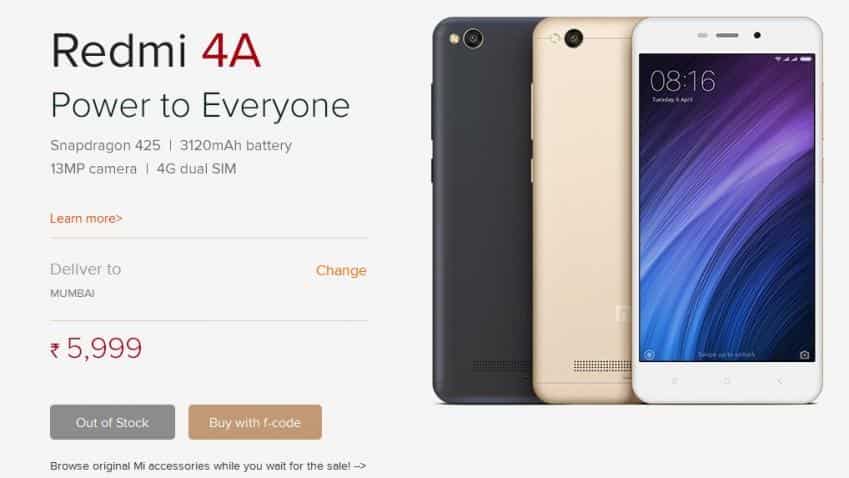 What to buy: Xiaomi Redmi 4A vs Redmi 3S, Samsung Galaxy On5, Lenovo Vibe K5 Plus, Lyf Water 10

Xiaomi on Thursday launched its budget smartphone the Redmi 4A priced at Rs 5,999. The successor to the Redmi 3S was sold through its flash sale on Amazon and its own website Mi.com. However, the sale which began at 12 noon ended within minutes of it going on sale.

Like with many of Xiaomi's flash sales the smartphone was sold out just after going on sale. While people were surprised to see the 'Out of Stock' on Mi.com, on Amazon people has to be put on wait list or some didn't even get that option.

#Redmi4A Mi India out of stock in 2mins

This did not go well with many who were looking to buy the newly launched smartphone. Some who took to Twitter even said that the Amazon site had crashed at 12 pm when they went to buy the smartphone.

WTF..! Trying to buy #Redmi4A but this happens when the clock hit 12.00..@amazonIN has always fooled people in flash sales @XiaomiIndia pic.twitter.com/83Td51aAJq

@amazonIN Site crashed at 12. You were not prepared for the sale. No harm in learning "How to execute Flash Sale" from @Flipkart #Redmi4A

Others complained that the 'Add to Cart' button was not working and as a result was not able to purchase the Redmi 4A.

#Amazon #xiaomi #Redmi4A site down, Add to Cart button nt wrking and THEN the sale is 100% lol. Joke of the day who wanna buy phone

This is a recurring problem many customers have faced with Xiaomi flash sales. It can be recalled that the Xiaomi Redmi Note 4 was sold out within minutes just last month. However, the company has always not been able to match the demand for their smartphones time and again. Leaving several potential customers angry.

Also read: What to buy: Xiaomi Redmi 4A vs Redmi 3S, Samsung Galaxy On5, Lenovo Vibe K5 Plus, Lyf Water 10

The Redmi 4A is a 4G VoLTE smartphone and comes with a 3120 mAh battery capacity and has 5 inch HD display with 16GB internal memory expandable up to 128GB. It also comes with a 2GB RAM and 1.4 GHz Qualcomm Snapdragon 425 quad-core processor, a 13 megapixel rear camera and 5 megapixel front camera. It runs on Android 6.0 Marshmallow along with MIUI 8 operating system.

It also features a polycarbonate (plastic) unibody design and will be available in three colours, Gold, Rose Gold and Dark Grey.

What to buy: Xiaomi Redmi 4A vs Redmi 3S, Samsung Galaxy On5, Lenovo Vibe K5 Plus, Lyf Water 10