Xiaomi is set to heat up the premium segment with its new flagship-level smartphone – Mi 10 – confirmed to be launched in India on March 31. 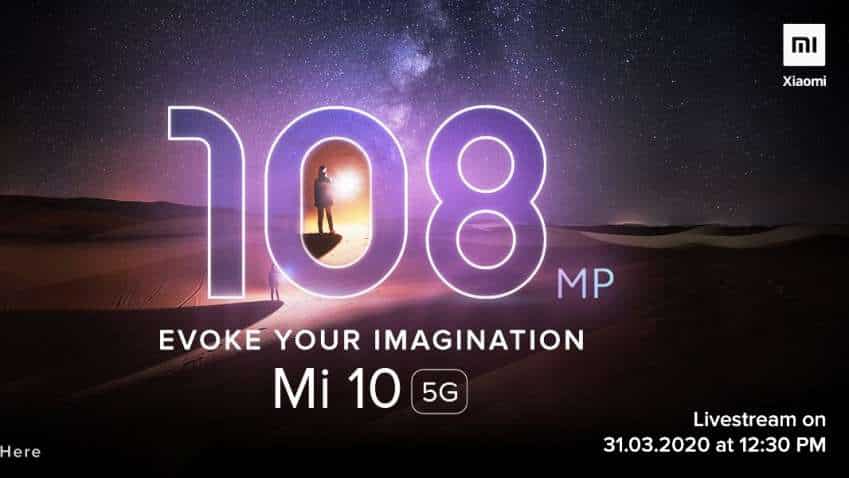 The Mi 10 features a curved 6.7-inch AMOLED display with a single hole-punch on the front.
Written By: ZeeBiz WebTeam
Edited By: Harish Dugh
RELATED NEWS

Xiaomi is set to heat up the premium segment with its new flagship-level smartphone – Mi 10 – confirmed to be launched in India on March 31. The smartphone has already been launched in China and its India launch has been teased on several occasions as well. On Thursday morning, the company confirmed the launch by rolling out media invites for the same. To recall, Xiaomi has cancelled all its on-ground launch events for March and the smartphone will be unveiled during an online event, just like the Redmi Note 9 series.

The Mi 10 features a curved 6.7-inch AMOLED display with a single hole-punch on the front. The smartphone will come with 90Hz display and 180Hz touch sampling rate. It is powered by Qualcomm Snapdragon 865 chipset which makes the smartphone 5G-ready. The only other devices to have offer 5G support in India are Realme X50 Pro 5G and iQOO 3.

The biggest highlight of the smartphone, however, is its 108-megapixel primary camera. It features ISOCELL Bright HMX sensor from Samsung. The rear camera setup also includes a 13-megapixel sensor, and two 2-megapixel sensors. The phone supports 8K video recording, OIS and EIS. On the front, you get a 20-megapixel sensor.

The Mi 10 packs a 4,780mAh battery and comes with support for 30W wired Flash Charge as well as 10W reverse wireless charging. The Mi 10 will likely be available for purchase via Amazon India. The flagship device should also be available through the company’s Mi.com.

The Mi 10 price in India will be announced during the launch but is expected to be over Rs 40,000.

The smartphone will compete against last month’s Realme X50 Pro 5G and iQOO 3. Both the smartphones are powered by Qualcomm’s Snapdragon 865 chipset, support 5G connectivity and quad rear camera setup.