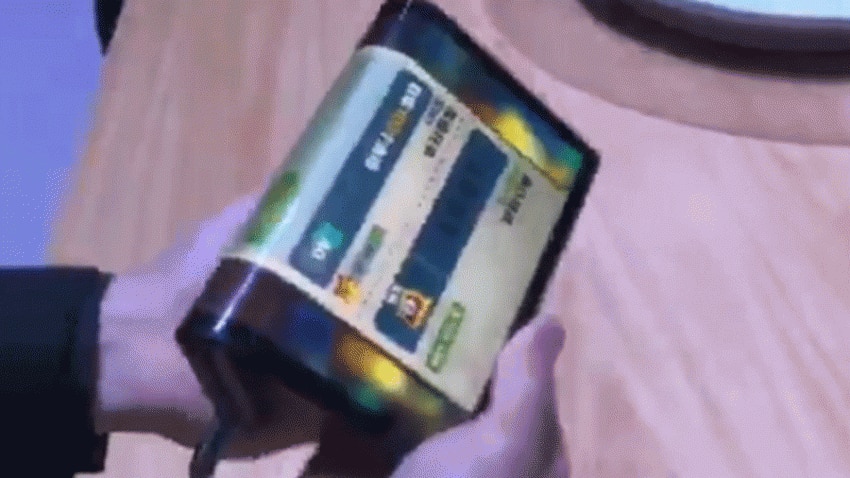 As per the company's claims, FlexPai is the first smartphone to have 7nm chipset from Qualcomm. Image Source: Twitter
Written By: ZeeBiz WebTeam
RELATED NEWS

Beating big tech companies like Samsung and LG, a little known Chinese company Rouyu Technology is going to launch the world's first foldable smartphone. It is named FlexPai, which is basically a 7.8-inch massive tablet when unfolded and when folded you will get a 4-inch smartphone screen, according to a BGR report.

The FlexPai features AMOLED display which helps the phone to fold from the middle. This phone doesn't run on any regular OS. It works on a customised version of Android, known as Water OS, and it has been specially designed to switch to half screen mode when folded.

When folded, the other half of the screen will automatically show a wallpaper and you can use the device as a smartphone. FlexPai allows users to choose which half they want to use but the split between the two screen is not equal.

As per the company's claims, FlexPai is the first smartphone to have 7nm chipset from Qualcomm. The San Diego-based chipmaker hasn't announced any thing about its first chipset fabricated using 7nm processor and only Snapdragon 8150 fits that billing.

As far as the features and specifications are concerned, the Flex Pai has two different variants - 6GB RAM 128GB internal storage and 8GB RAM + 128GB or 512GB storage.

The foldable phone is 7.6mm thick when unfolded and it becomes a 15.2mm thick piece of electronics when folded, making it difficult to fit in one's pocket. Its battery capacity is not confirmed but it comes with proprietary Ro-charging for fast charging which go from 0-80 per cent in an hour.

The starting price of the smartphone is RMB 9,000 which is around Rs. 95,000. According to the reports, Samsung is also working on a foldable smartphone codenamed Winner, which may comes in 2019.