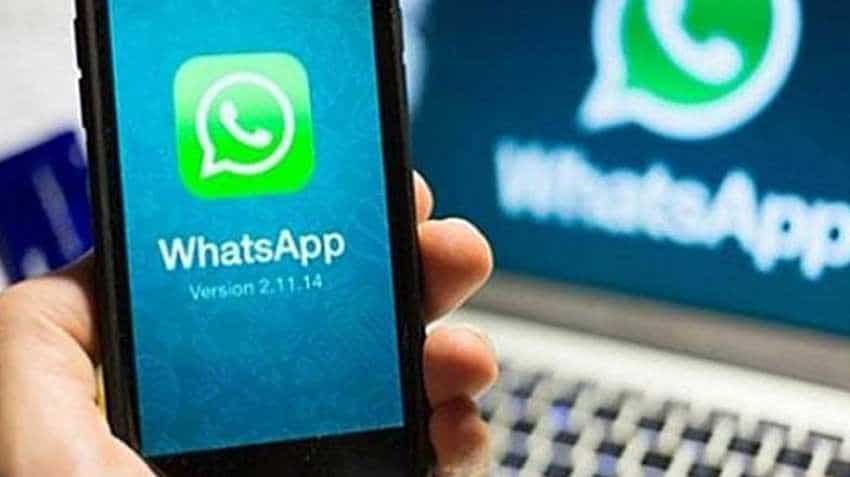 'WhatsApp Gold' fiasco spread in India with people receiving messages urging them to download 'an update' for the messaging app, which in reality is a malware. Reuters

One of the world's most widely used social messaging apps, WhatsApp, has been the favourite of hackers and fraudsters. Several scams had happened in the past in which hackers have used WhatsApp to fool the people. Over the last few weeks, messages linked to free air tickets, WhatsApp Gold update and Ayushmaan Bharat registration have been doing rounds on the app intending to hack people's smartphones and thereby steal money from them. These messages have links attached to them. Once you click on them, either they install malware in your smartphone or take you to a page where they ask you to furnish private information. You must be aware of these tricks used by hackers and fraudsters to con you off your money. Here are complete details of these WhatsApp messages and how to save yourself from falling prey to fraudsters:

WhatsApp Gold
'WhatsApp Gold' fiasco spread in India with people receiving messages urging them to download 'an update' for the messaging app, which in reality is a malware. WhatsApp has a user base of over 200 million in India, which means that there is a high possibility of maximum impact being borne by Indian users, resulting in huge volumes of personal data being compromised.

“An open philosophy and relaxed app submission protocols have resulted in a host of malicious applications being hosted on the Google Play store. While an open philosophy is a great step to encourage budding programmers, it also renders the platform and its users vulnerable to installing fraudulent apps, exposing the consumer to data theft and proliferation of user information," said Venkat Krishnapur, Vice President of Engineering and Managing Director, McAfee India.

Free Air Tickets On WhatsApp
Certain messages have been circulating on WhatsApp that airlines are giving out free tickets. The messages contain a link similar to the website of the said airlines. Recently, one message linked to Singapore Airlines was spotted by users. 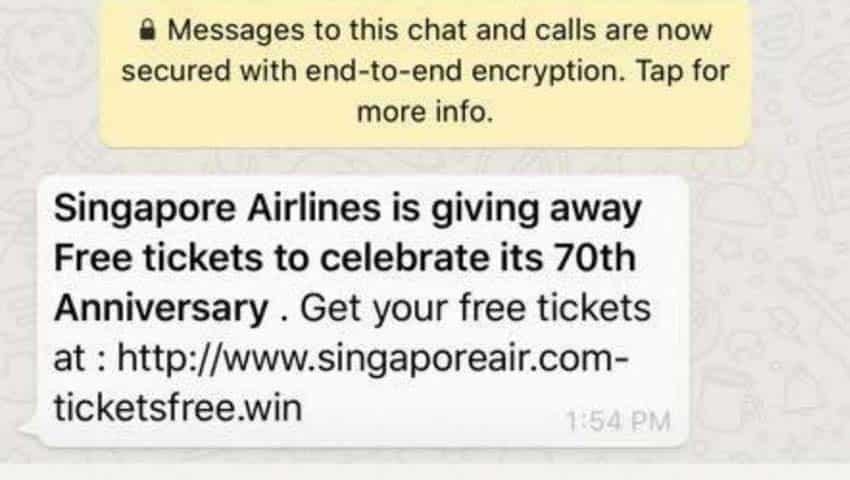 Ayushmaan Bharat registration On WhatsApp
Ayushman Bharat is National Health Protection Scheme, which will cover over 10 crore poor and vulnerable families (approximately 50 crore beneficiaries) providing coverage up to 5 lakh rupees per family per year for secondary and tertiary care hospitalization. The state governments itself register the beneficiary in the scheme. However, messages have been doing rounds on the WhatsApp asking people to register to get the free treatment coverage of up to Rs 5 lakh.

@JPNadda @PMOIndia Sir, a malicious website is being circulated on WhatsApp to dupe people in the name of Ayushmaan Bharat. Please take action to block this. pic.twitter.com/rGJF6kVl3l

Free Paytm Cash On WhatsApp
Most recently, a message circulating on WhatsApp asked the people to answer four questions by clicking on the said link to win Rs 1,000 Paytm cash. However, the message is fraudster's trick to gain the access to user's data. Naveen Dham, CEO at GIS Consulting, network security and cyber security consultant, said that people’s negligence are one of the key reasons behind the success of such data breach incidents.

"It has been seen that hackers have been trying their nasty tricks every now and then to befool the innocent WhatsApp users thereby stealing their sensitive information. Cybercriminals mostly take advantage of our basic human nature to create fast bucks by attracting them to lucrative lucky jackpots, new updates to their current technology gadgets promising new attractive features etc. Studies show that people’s negligence or malicious acts accounted for two-thirds of cyber breaches, according to historical claim data analysed by London-based consultancy Willis Towers Watson. Just 18% were directly driven by an external threat, and extortion accounted for a measly 2%. Overall, the research found that about 90% of all cyber claims stemmed from some type of human error or behaviour," said Dham.

McAfee's Krishnapur said that users of new age communication platforms must follow some basic but vital security hygiene to ensure their information stays protected from such phishing scams.

"It is important to read other users’ reviews to see if the app is safe and does what it claims to do. Be extra wary of “free apps” distributed through little-known sites, or via links sent by email or text message. Ensure that you read the app permissions first so that it does not invade your privacy by accessing information it doesn’t need, like your contacts, camera, or keystrokes. Stick to using the official apps from the play stores. Additionally, comprehensive mobile security software can help guard against viruses, malware, device theft and other threats," said Krishnapur.