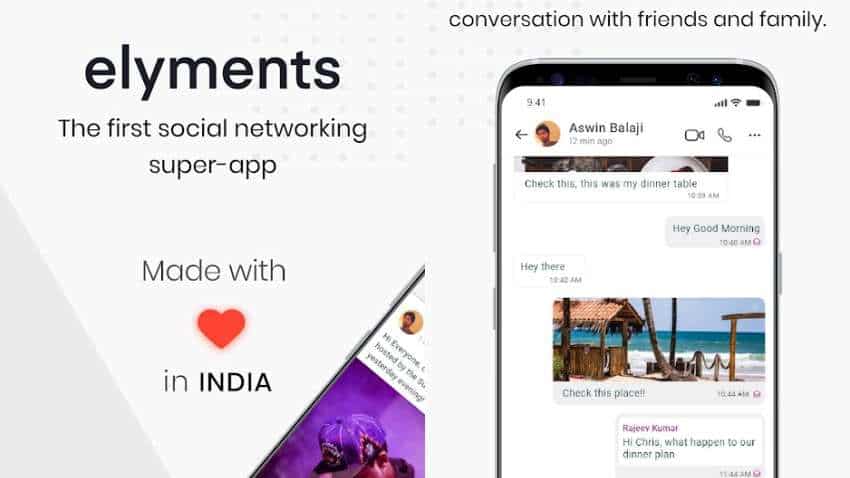 The new Made in India app is available for download worldwide both on iOS and Android. Source - Google Play Store.
Written By: ZeeBiz WebTeam
Edited By: Harish Dugh
RELATED NEWS

With Indian government’s ban on select Chinese apps and growing demand for Local for Vocal, the race is on to make India’s super app, with several developers in the running for the title. We have seen platforms like Chingari and Mitron bring millions of users onboard within days. And, now there is a new player in the town which aims to take on giants like Facebook and Whatsapp to become India’s very own super app.

Launched by Vice President M Venkaiah Naidu, Elyments app was introduced on Sunday, under the Aatmanirbhar Bharat campaign. The new Made in India app is available for download worldwide both on iOS and Android.

The app has been made keeping the Indian audiences in mind and is available in eight different regional languages. The app is free for download and lets the users make audio and video calls including conference calls. Elyments’ creators claim that their data will not be shared with third party without the user’s consent.

What are Elyments app features?

It comes with basic social media app features that can be found on other platforms too. These include a discover option where you can follow celebrities, athletes, politicians, etc. The notifications bar has been replaced by Alerts which lets you track friend requests and activities such as likes, comments on your posts.

The app also aims to promote Indian brands on the platform, similar to the Facebook marketplace along with Elyments Pay for secure payments. The app has a rating of 3.4 on Google Play Store and has been downloaded over 1.3 millions times.