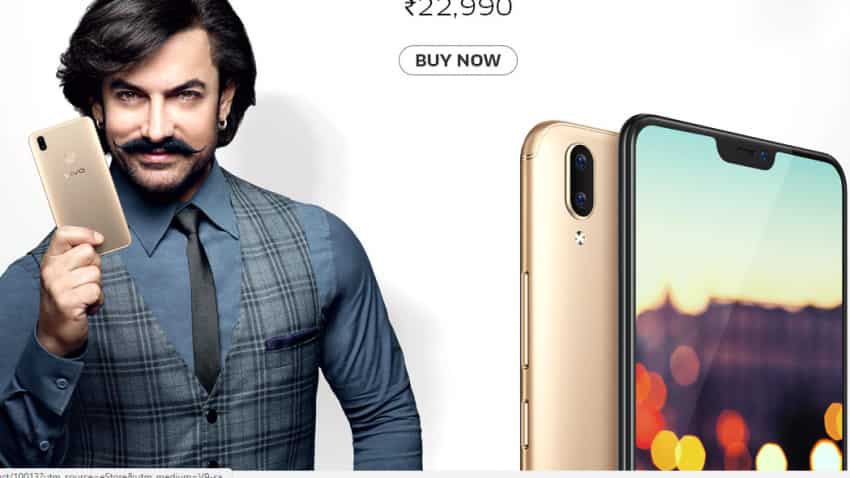 With its top-of-the-line selfie technology and youthful designs, Chinese player Vivo has created a distinct space in the cut-throat Indian smartphone market. The new Rs 22,990 V9 -- Vivo`s first flagship with dual rear-camera system in India -- is no different. Vivo has once again played on refreshed design and camera technology to woo selfie-lovers. The company claims that V9 is the first device with the highest screen-to-body ratio of 90 per cent and next-generation Artificial Intelligence (AI) technology to enhance selfies.

Let`s see what works for the device.

Vivo V9`s design is inspired by iPhone X. However, it sports a smaller notch on the front. On the back, the device houses a dual-lens camera system aligned in the same fashion as in the Apple flagship.

The display is impressive and delivers a premium experience with details, vivid hues, sharper brightness and a wide colour gamut.

The device runs FunTouch 4.1 user interface (UI) based on Android 8.1 Oreo OS. The wallpaper is similar to Pixel 2 and Pixel 2 XL devices, and the stock theme appears to be a combination of iOS and Android interface.

The "Smart Motion" feature let users control functions with gestures. You can turn the torch on by shaking the device, just like you can do with Motorola`s "Double Karate Chop" feature.

Even though the device has bloatware, it functions smoothly thanks to the Qualcomm Snapdragon 626 processor which is coupled with 4GB RAM.

We worked with several apps running in the background. The device neither heated up nor we experienced any lag.

The device comes with 64GB on-board storage and has an option to extend it up to 256GB.

The USP of Vivo V9 is the AI-powered camera. The device houses 16MP+5MP dual-rear camera system.

The photos clicked from the camera were rich in colour, the autofocus worked well and images in day-light conditions were crisp.

The camera also clicked great portraits and offered an option to change the amount of blur.

In Live Photos, the camera clicks a series of photos to make a GIF image.

Users can also use the "beautify" feature depending on their requirements.

The device has a 3,260mAh battery that lasted less than a day on a regular usage when it was connected to Internet for entire day and ran three episodes of "Altered Carbon" on Netflix during the battery test.

The performance of rear cameras was not that good in darker conditions.

While Moto X4 comes with metal body and glass back, Vivo V9 has plastic body with metallic finish which makes it hard for company to compete in this segment.

The overall performance was satisfactory but it was not as good as its competitor Moto X4.

Conclusion: Vivo V9 would surely keep selfie enthusiasts happy. It is a good competition to Moto X4 and Oppo F7 in the same price segment.