LG Electronics showed off a "wallpaper" thin television as TV makers vied for the spotlight ahead of the Consumer Electronics Show officially opening on Thursday. 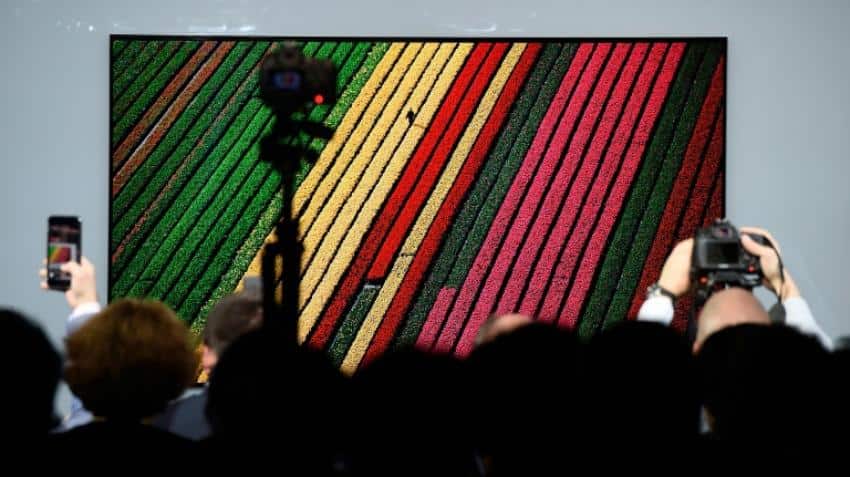 LG Electronics showed off a "wallpaper" thin television as TV makers vied for the spotlight ahead of the Consumer Electronics Show officially opening on Thursday. Pic: AFP
Written By: AFP
RELATED NEWS

CES 2021 set to be in-person event in Las Vegas

LG Electronics showed off a "wallpaper" thin television as TV makers vied for the spotlight ahead of the Consumer Electronics Show officially opening on Thursday.

As in years past, the South Korean consumer electronics giant staked out the opening slot in a day rich with back-to-back press briefings by industry titans.

LG and rivals touched on hot themes at this year`s show -- including robots, appliances equipped with artificial intelligence, and self-driving car technology.

The screens are designed to affix to walls with magnetic brackets, protruding less than 4 mm.

Sony used CES to introduce a stunning A1E series Bravia OLED television in a shift to image technology that had been terrain ruled by LG in the US market.

"It renders every detail of an image," Sony Corporation chief executive Kazuo Hirai said of the new flagship TV at the company`s booth on the CES show floor.

"You will see more than you every thought possible in a display."

Sony eliminated speakers from the A1E series, creating technology that generates rich sound by making the screen vibrate in what Hirai boasted to be an industry first.

Google`s Android TV software for accessing internet content was also built into the screens, according to the Japanese consumer electronics and entertainment titan.

TCL out to grow

China`s fast-growing television maker TCL was at the show with a mission to expand its market.

"We are here today because we are investing in the future of technology, specifically smart TVs," TCL marketing executive Ranjit Gopi said during a press briefing.

TCL is investing some $7.7 billion in high-quality television screens and is aiming to make the world`s slimmest curved television, according to Gopi.

He introduced a new flagship "X" series television that will launch first in China and then be rolled out elsewhere.

"We are delivering on our vision of the future."

Samsung ramped up its smart TV platform with an offering tailored for sports lovers, and added a new entertainment application. Features in the new models included being able to recognize who is speaking while being commanded by voice.

Sales of televisions globally have been slipping, a seeming result of viewers turning to smartphones, tablets, and computers for video, according to Steve Koenig, senior director of market research at the US Consumer Technology Association trade group behind CES.

Koenig forecast that $105 billion will be spent this year on televisions, down from $108 billion last year.

However, those who do buy televisions are expected to prefer 4K high-definition models, with the number of those screens sold jumping to nearly 82 million this year compared with just shy of 53 million last year, according to Koenig.

CES 2021 set to be in-person event in Las Vegas