This popular WhatsApp feature now on this other app: How to get it and use

Instant messaging app WhatsApp had rolled out the ability to 'unsend' messages on its platform - a feature that came as a huge relief and became highly popular among its users. 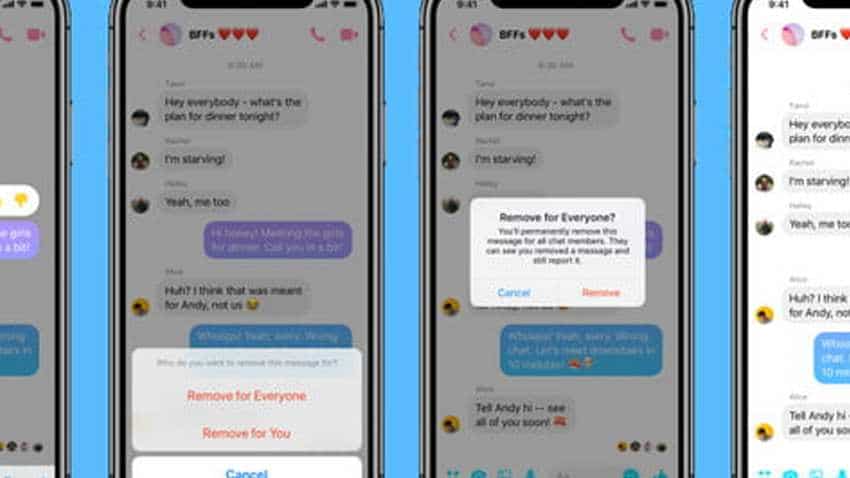 The unsend feature on Messenger comes with a 10-minute window after sending a message to undo it. Source - Facebook.

Instant messaging app WhatsApp had rolled out the ability to 'unsend' messages on its platform - a feature that came as a huge relief and became highly popular among its users. The feature was added to Android, iOS and Windows Phone versions of the app. It allows users to delete messages from an individual and groups chat, even though with a few limitations. Now, in what comes as another good news, this time for Facebook users, the feature has been added to Messenger for anyone who has fired off a comment they regretted - a way to take the controversial comment back.

The unsend feature on Messenger comes with a 10-minute window after sending a message to undo it. However, it will leave behind a note telling everyone in a conversation that the remark was removed, according to the leading online social network. "Have you ever accidentally sent a message to the wrong group of friends, mistyped something, or simply wanted to remove a message in a chat?" Facebook asked rhetorically.

"You're not the only one! Starting today, we are launching a feature where you can easily remove your message on Messenger," it added.

The freshly added feature will let people tap on a message shown in a Messenger conversation then select a "Remove for Everyone" option, which will only be available for 10 minutes from when it was sent. The remove feature will be available on mobile devices powered by the latest versions of Apple or Android software, according to Facebook.

Earlier, it was revealed that Facebook co-founder and chief executive Mark Zuckerberg was apparently able to remove his sent messages last year. This had caused some panic among Facebook users and had build pressure on the company to make the feature available to all.