Thinking how to use WhatsApp on JioPhone? Here's your answer

The much awaited JioPhone will have a version of Whatsapp on its device however it is still unclear on what version of the messaging app will be available. 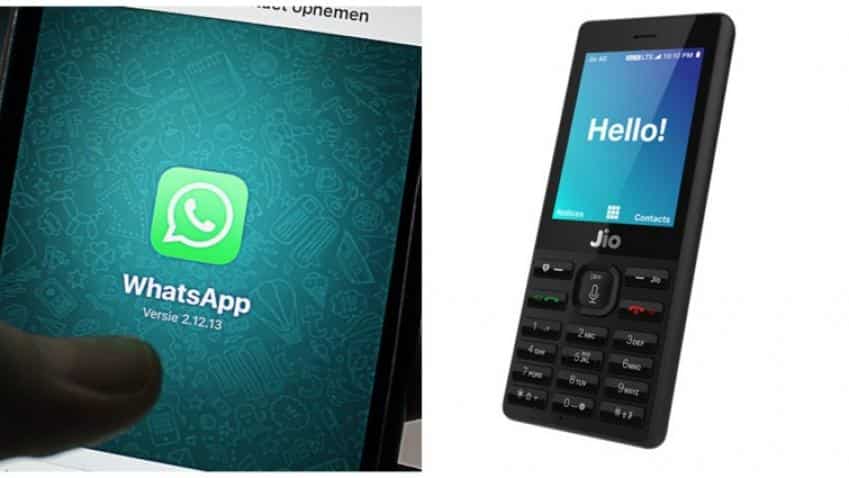 During the launch Jio did not reveal JioPhone’s operating system specifications. The speculated version of the OS would not be able to support applications like WhatsApp, media reports said earlier. Image Source: Pixabay/ Reliance Jio PR
Written By: ZeeBiz WebTeam
RELATED NEWS

The 4G enabled VoLTE feature phone from Reliance Jio – JioPhone -- which is expected to become available in September will have messaging application WhatsApp built in.

JioPhone will have a version of WhatsApp for its users, Zeebiz.com learnt.

WhatsApp in association with Mukesh Ambani-backed Reliance Jio have held preliminary talks over launching a ‘custom-made’ version of the app on the device, a report by FactorDaily said on Friday.

“There have been a few meetings between Reliance Jio officials and WhatsApp officials… but the discussions are preliminary,” said one source. The second source, close to Reliance Jio said, “The talks are on. We already have a relationship with Facebook… There are technical challenges. A version (of Whatsapp) is needed that will work optimally on the JioPhone,” the report quoted sources.

JioPhone was launched at the 40th annual general meeting of Reliance Industries Ltd (RIL) on July 21, in which Managing Director of RIL, Mukesh Ambani said the phone would be ‘effectively free.’

During the launch the company did not reveal JioPhone’s operating system specifications. Media reports later surfaced that the phone may run on KaiOS which is a ‘forked’ version of the Firefox operating system.

Due to this operating system JioPhone was speculated not to support WhatsApp in the initial phase but users may be able to use other applications like Facebook.

The apps that will be available with the phone are Jio apps like – JioMusic and JioCinema  that have been pre-loaded on it, the company said.

Jio claimed to have a user base of 12.5 crore in India. While launching the JioPhone, Ambani spoke of 50 crore feature phone users in India who were unconnected to the internet because they couldn’t afford it.

With its 4G enabled ‘low-cost’ feature phones, Jio has been speculated to take over the rural market in India.

"We are targeting to have five million Jiophones available every week," Ambani said.

The phone is scheduled to be available for beta testing on August 15 and pre-booking will begin from August 24, the company said.