Sony WF-XB 700 review: Priced at Rs 9,990 in the Indian market, the Sony WF-XB 700 are positioned at a highly crowded and competitive market alongside Samsung Galaxy Buds+, Jabra Elite 75T and of course, the Apple AirPods. They come bass-heavy sound, an IPX4 rating and a combined 18 hours of battery life between the buds and the case. Is this enough to spend on? Let’s find out in our review of Sony WF-XB 700. 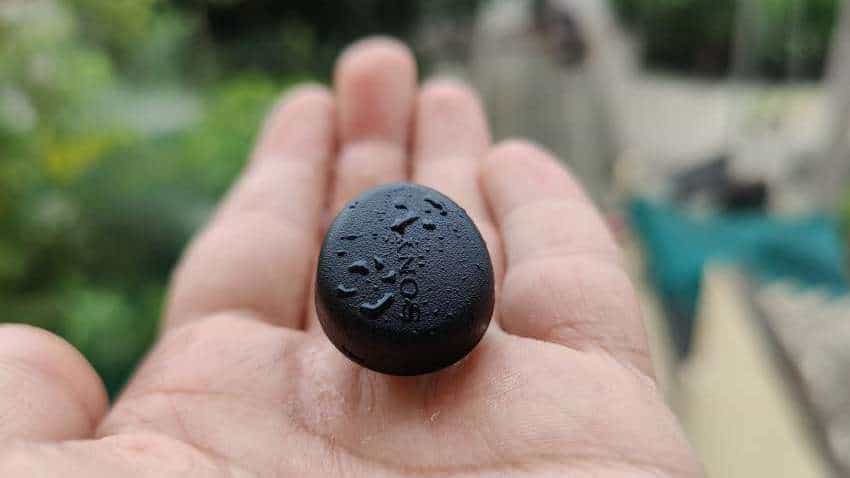 The Sony WF-XB 700 flaunt the most unfamiliar design I have seen on a pair of earbuds.
Written By: Manas Tiwari
Edited By: Harish Dugh
RELATED NEWS

Sony WF-XB 700 review: What’s in a name? Asked William Shakespeare. Sony replied – let us explain. Last year, the company had launched Sony WH-XB 700 and now, it has introduced Sony WF-XB 700 in the Indian market. As confusing as the names are, the devil lies in details. The ‘H’ in WH-XB 700 stood for Headphones while ‘F’ in WF-XB 700 is for Freedom.

Still confused? Let me break it down for you - Sony WF-XB 700 are company’s new truly wireless earbuds under its extra bass (XB) category. But, me and Mani Balan (Product Manager - Personal Audio – Sony India), have mutually agreed to call these Chota Bheem to avoid such confusion. You can watch the full conversation here -

Priced at Rs 9,990 in the Indian market, the Sony WF-XB 700 are positioned at a highly crowded and competitive market alongside Samsung Galaxy Buds+, Jabra Elite 75T and of course, the Apple AirPods. They come bass-heavy sound, an IPX4 rating and a combined 18 hours of battery life between the buds and the case. Is this enough to spend on? Let’s find out in our review of Sony WF-XB 700.

The Sony WF-XB 700 flaunt the most unfamiliar design I have seen on a pair of earbuds. It is good to see that Sony didn’t opt for the stem design (which is being adapted by most brands) and instead, went ahead with oblong buds. To say that Sony WF-XB 700 are big, would be an understatement. The earbuds are huge - largely because of the bigger battery - reducing the portability factor. 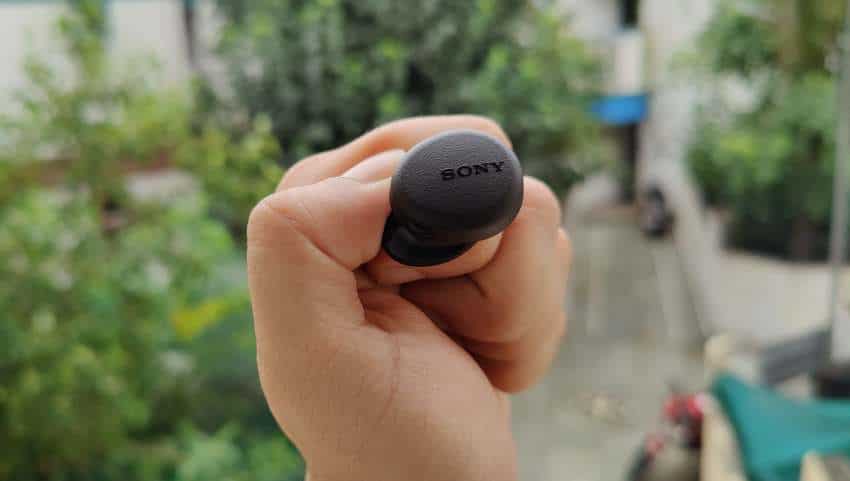 And, it’s not just the outer disc that contributes to the size of the buds but also the three-level design which only makes them thicker. The outer part apparently houses the battery, drivers are in the middle shell followed by the ear tips that fit in your ears.

Now, don’t get me wrong. The earbuds fit in really well in your ears but you always know that you are carrying something with you – which wasn’t the case with Samsung Galaxy Buds+ that I had recently reviewed. So, clearly these are not made for people who are looking for a slim option. 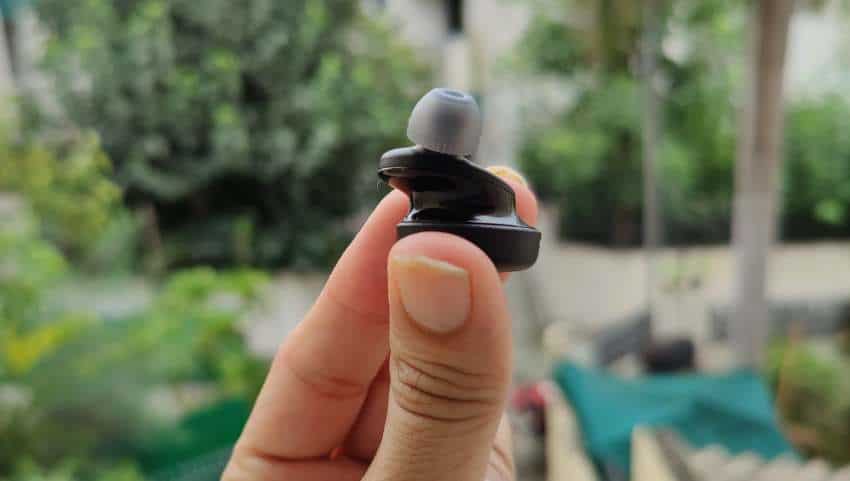 In fact, the retail package itself was cramped for a product for this size. You could almost feel that everything was just forcefully stuffed inside the box. Thankfully, you get some ear tips inside the box to adjust the fitting.

While these are the most space-effective earbuds in the market, the size has its own advantage. First of all, it allowed Sony to pack a 9-hour-long battery inside the buds itself. This is slightly less than the 11-hour battery life on Samsung Galaxy Buds+ but more than double what Apple AirPods offer (5 hours). Then, the larger size helps the buds completely cover your ear canals. This not only creates a tight sealing but also blocks ambient noise.

On the contrary, Sony ships a really compact carrying case with the buds. In fact, it hardly gives you an idea about the actual size of the buds. The plastic case with Sony WF-XB700 comes with a translucent top that allows you check the charging status of the earbuds. There is Sony branding on top of the case and a Type-C USB charging port at the back. 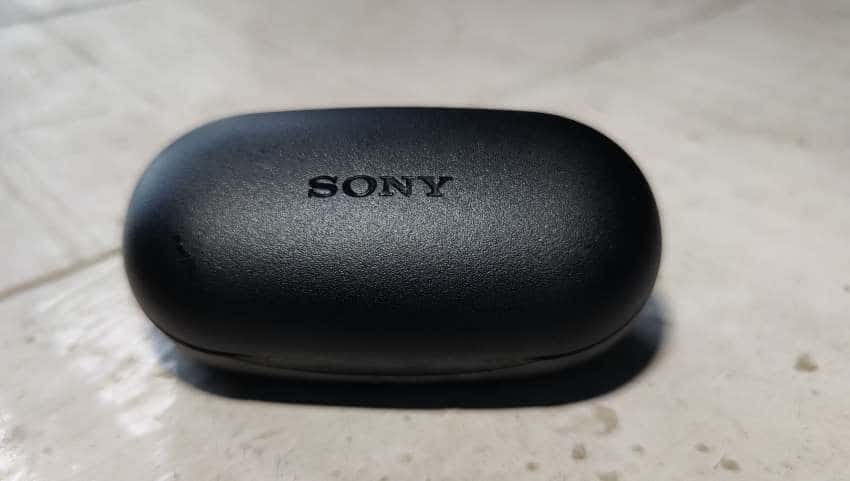 Both the case as well as the buds come with matte finish on top. The build quality looks really solid as well.

The earbuds come with tactical push buttons on both the earbuds, positioned around the outer edges of each disc. You can press the button of the left earbud once to increase the volume and hold it to decrease it. The button on the right earbud can be used to play/pause or skip tracks. You can hold it to activate voice assistant. 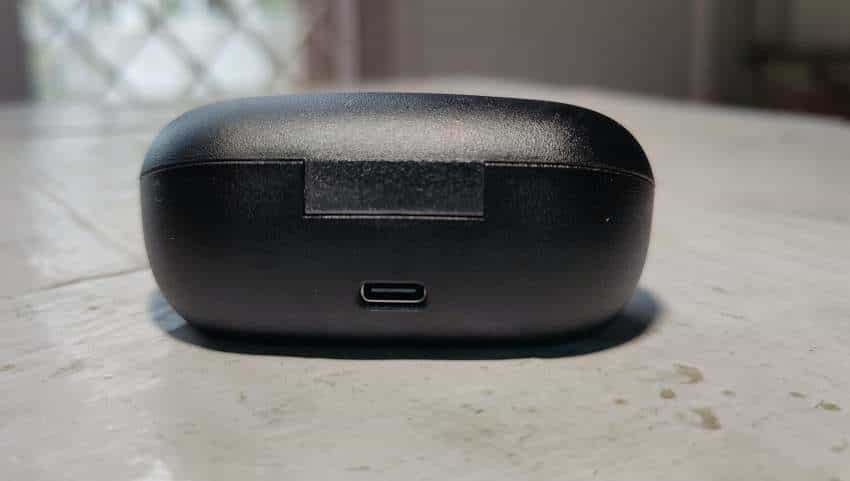 Sony could have gone ahead with touch controls, especially as the earbuds come with an IP rating, but the buttons were probably a part of the cost-cutting exercise.

I must admit that I was really looking forward to these earbuds from Sony, given their legacy and expertise in the audio industry. Lately, I have tested earbuds from several companies including Realme, Xiaomi, Huawei and Samsung. While Samsung truly stands out, others leave you asking for more, even as they justify their price point. With Sony, I had little doubts about the audio performance.

And, the WF-XB 700 don’t disappoint you at all. The earbuds justify their name by adding that extra thump to your songs. The bass is certainly noticeable here but thankfully, doesn’t artificial as in the case of some affordable alternates. 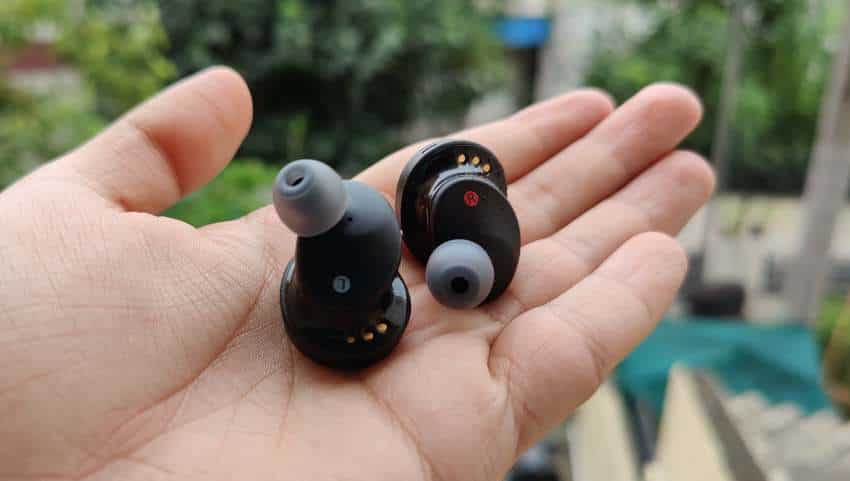 Sony has a very able Headphones connect which I have used in the past with – both with their headphones as well as neckband. Unfortunately, the Sony WF-XB 700 don’t have support for this app which restricts your ability to play with the equalizer and adjust the bass. In simple, words you are totally dependent on the buds to adjust audio output, when switching between genres and formats.

Yet, it doesn’t affect your overall experience much. In fact, in some cases, the mood of the song is lifted because of that extra bass. For example, the drum in Sultan Khan and KS Chithra’s ‘Piya Basanti’ right before the vocals was true magic. The vocals that follow were equally punchy. 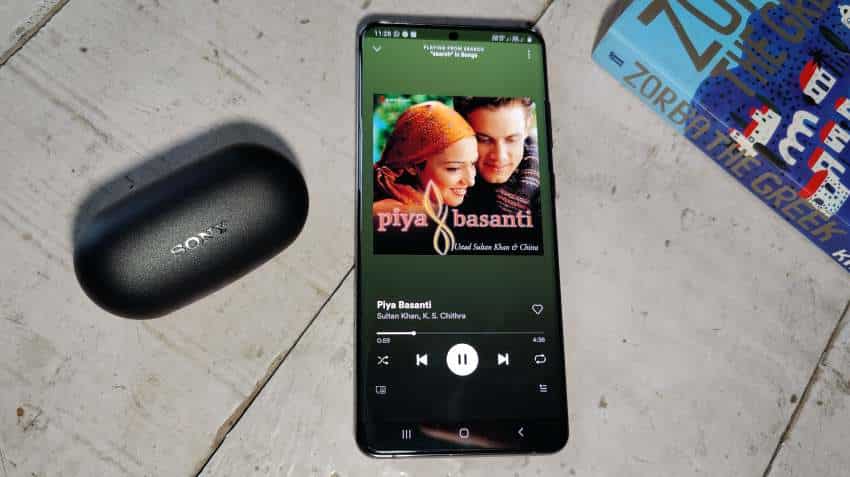 Even the 10-second build before Shankar Mahadevan goes on a marathon with ‘Breathless’ will have you hooked. As Mahadevan picks up the pace and goes on to deliver a scrumptious melody, each note and beat was absolutely clear.

The more bass-heavy songs like ‘Keep on Trippin’ by Manu Katche and Door of the Cosmos by ‘Sun Ra’ definitely had more powerful and booming.

One area where the added bass can play spoilsport is while streaming YouTube videos or web series. In both the cases, the dialogues are noticeably quieter and the inability to adjust the bass, adds to frustration. Also, Sony WF-XB 700 don’t have support for aptX - the higher-resolution audio codec that can broadcast HD audio. This somewhat stops the earbuds from achieving the best audio output possible. 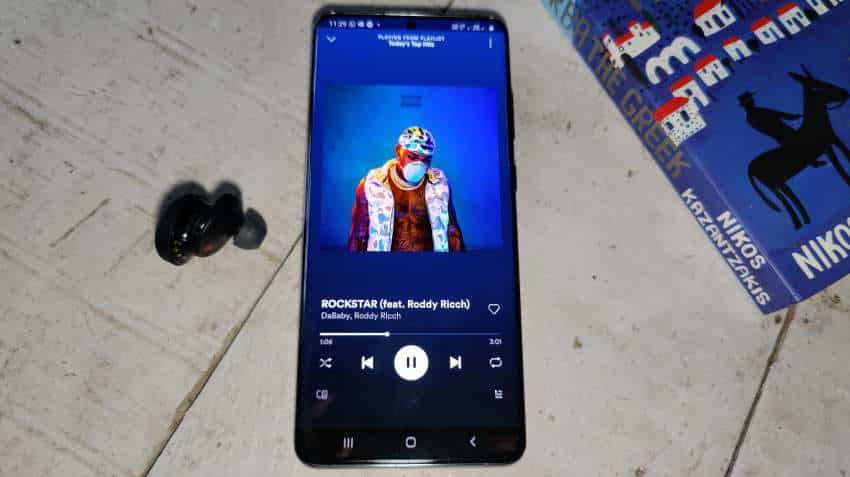 Even though the earbuds support HD voice calls, the person on the other end should also be using a smartphone that supports HD calls. Despite this, the call quality was largely fine without much issues. Given that a lot of people use earbuds during workouts, Sony has equipped the WF-XB 700 with IPX4 rating which makes them both sweat and water-resistant. 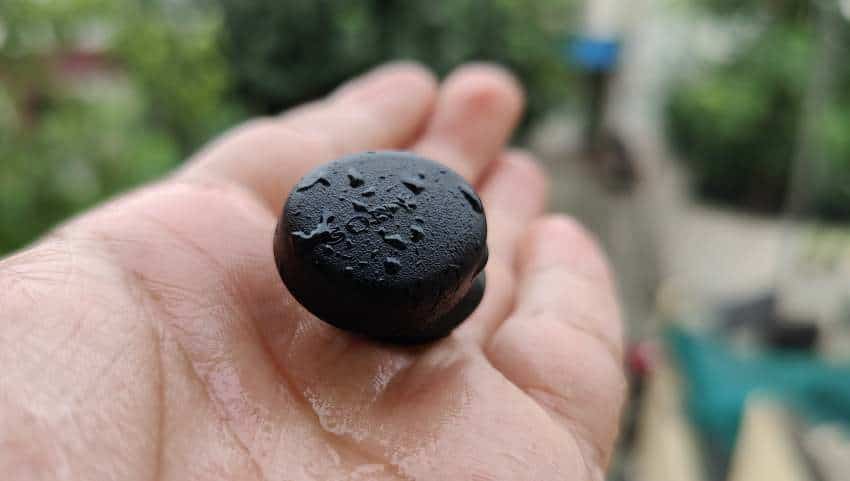 However, there is no noise cancellation of these, so you are likely to hear a lot of ambient sound, despite the body of the buds trying its best to block it.

The Sony WF-XB 700 is an ideal travel companion, given its massive 9-hour battery life. Surprisingly, the buds were giving a ‘battery 100% full’ message every time I was putting them on, even though I must have used them for four to five hours. I can only assume that the next message might come when battery reduces to 50 per cent or 25 per cent! 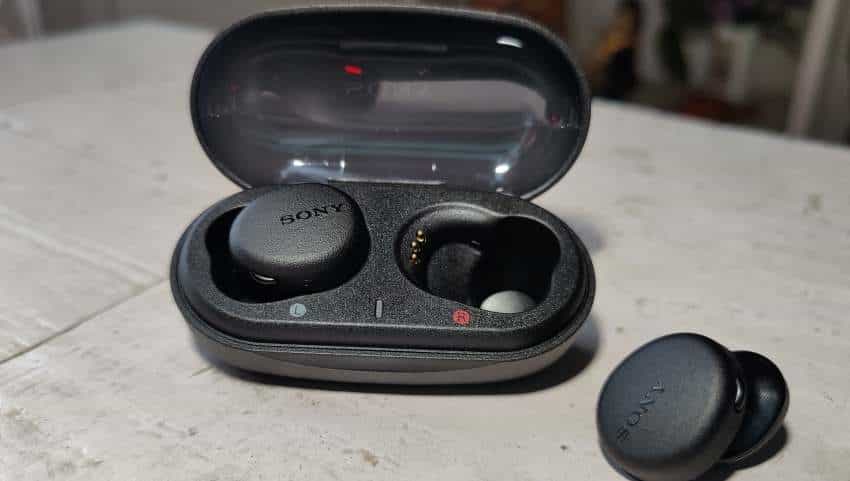 There is a nine-hour additional battery on the case, which gives you a total of 18-hour playback. Even in the worst case scenario, you can expect about 16 hours of playback which should be enough.

While I found the Sony WF-XB 700 to be really huge and there is no aptX support, the biggest miss here is noise cancellation, which Sony saved for its more premium WF-SP 800N launched at the same time – for Rs 19,990 though. Also, there is no auto-pause feature which means music keeps playing even after you have taken the buds out of your ears, till you put them back in the case.

But, there are certainly a lot of things Sony got right- starting with an extremely comfortable fit, a superb battery but above all, it’s company’s expertise in the sound segment that reflects in the audio performance of the Sony WF-XB 700. Since they cost about Rs 4,000 less than Samsung Galaxy Buds+, Apple AirPods and Jabra Elite 75t anyway, the Sony WF-XB 700 can be a good option if you want long-lasting battery life and powerful sound.