Sony SRS-XB402M smart speaker review: It's loud, it's smart, and it's fun The Sony SRS-XB402M looks elegant in its all Black avatar.
Written By: Manas Tiwari
Edited By: Prashant Singh
RELATED NEWS

Sony SRS-XB402M smart speaker review: With the amount of content that is being produced these days on OTT platforms and otherwise, I don't see myself surviving without a good Bluetooth speaker. And, life can be a lot easier if your speaker has brains! The newly launched Sony SRS-XB402M smart speaker promises to be exactly that device with great audio output, appealing design and in-built Alexa support. While there are several smart speakers available in the market, even for less than Rs 5,000, most of them fail to host a party for you.

And, that is the biggest plus point of the latest offering by Sony. The company understands the nerves of music lovers so well and knows how to offer them the best possible experience. But, just like any other Sony device, this one too is priced slightly higher at Rs 19,999. Is it worth the money you spend on it? Well, I have been using the Sony SRS-XB402M smart speaker for almost two weeks now and here is what I think of it.

Before we talk about the design and performance of the SRS-XB402M, I want to touch upon the major highlight of this speaker i.e. the in-built Alexa. This is the first Sony speaker to come with Alexa support and is set to make your life a lot easier. One annoying aspect of any Amazon device with voice assistant was that it had to be connected to the adapter while being used. With SRS-XB402M, you don't need to do that anymore. It accepts voice commands even when the speaker is not charging. This allows you to change the position of the device while leaving the charger behind. 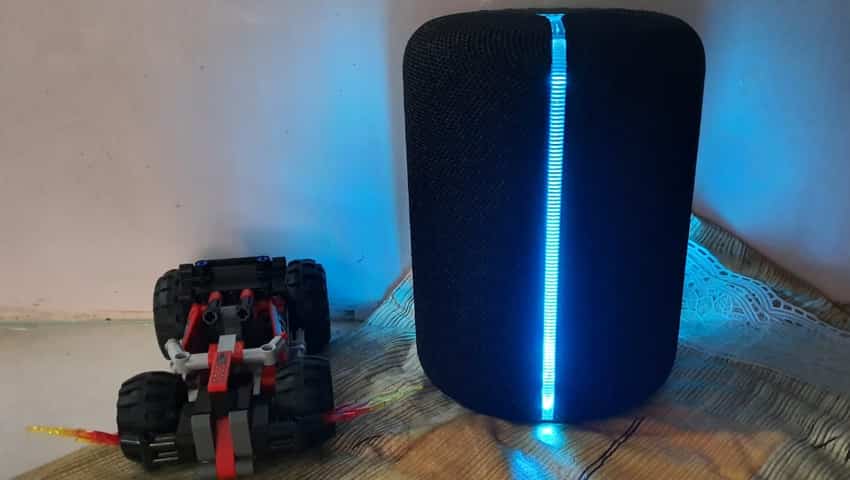 Alexa on this speaker is quite responsive and has been the star attraction for anybody who has visited my place over the last two weeks. It suggests music, gives your weather updates, cracks impressive jokes and these days, wakes me up for work with 'Hakuna Matata'. And, at this point, I would like to say - Alexa, Thank You. You can also use voice commands to switch between songs and adjust volume.

To use Alexa, you need to download the Sony Music Centre app. If you are already using Alexa or have used it in the past, you can connect the speaker a lot quicker and start using it. Every time you say the magical word, the LED lights on the speaker turn blue and the device is ready to take commands.

The only issue I faced was that Alexa fails to comprehend commands when the music is playing on high volume. It could be largely because the voice command is overlapped by the volume. In this case, you might find yourself shouting at the speaker within a few minutes.

The Sony SRS-XB402M looks elegant in its all Black avatar. It comes in an oval shape with thick fabric and rubber finish. This makes the SRS-XB402M look like a mini capsule. You get the basic control buttons on top of the speaker while the connectivity options are present at the back. There is also a four-LED light indicator for volume levels. At 1500 grams, the speaker weighs a bit more than you would expect from a portable device but in case you plan to keep it at one place for a longer period, it isn't a problem. 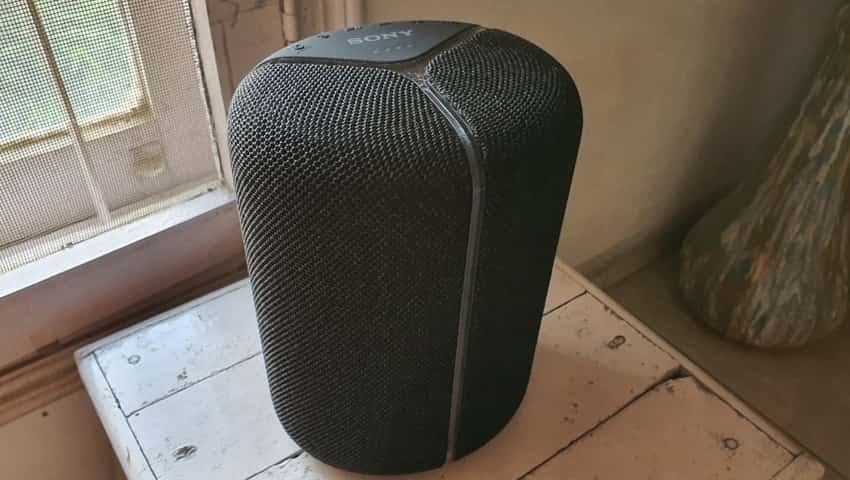 The SRS-XB402M sheds it cute 'BB8-like avatar' and transforms into a 'BB-9E' as soon as you turn it on. There is a triple multi-colour lighting that gives this speaker a devil-ish feel. In fact, one of my friends strongly believe that one day it will transform into a robot and take over humans (more pop culture reference there)! 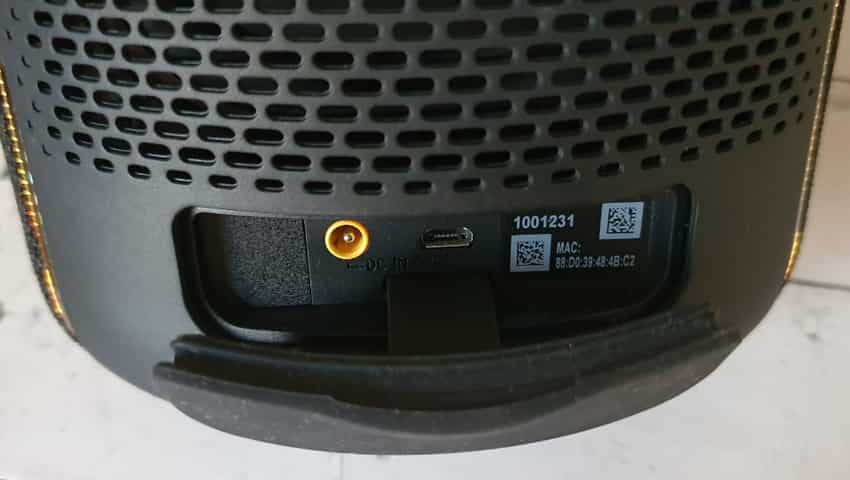 Anyway, you can change the lighting as per your mood. But, for that you need to physically move towards the speaker, press the button and complete the task. Or, you can control the Sony Music Centre app but the voice command doesn't work here.

Despite the fact that the Sony SRS-XB402M is primarily a smart speaker, the company has not compromised on the audio quality. The speaker uses two audio drivers, each 53mm in size, to disperse sound over a wider area. It can easily fill in your bedroom or even a bigger hall at higher volumes. You get a clear sound even while streaming music through Alexa or when the speaker is connected to a smartphone or laptop. 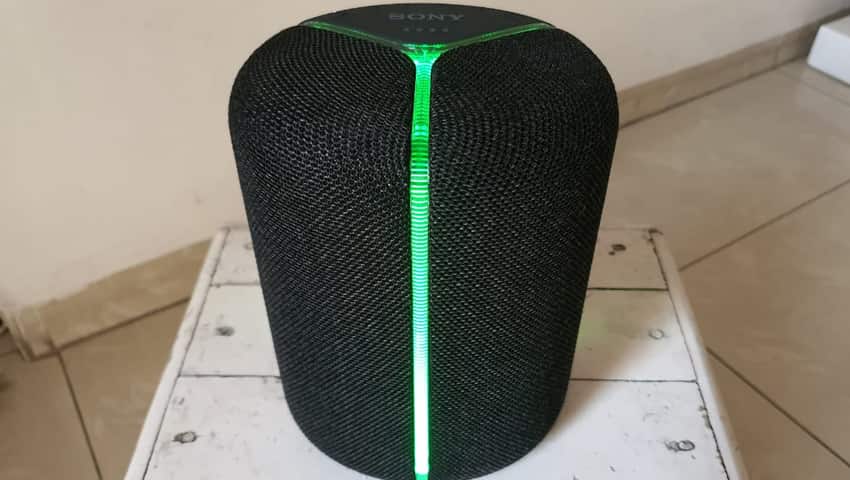 I used the SRS-XB402M with the Samsung Galaxy Note 10+ and Macbook Air and there wasn't much difference in the output. To test the sound quality, I played 'Red Right Hand' by Nick Cave & The Bad Seeds, 'Makeba' by Jain and 'Pachtaoge' by Arijit Singh, among other songs. While the speaker remains consistent with its performance, it really comes to its own with high bass tracks.

I also used the device to watch 'Men in Black: International' and a few episodes of 'Peaky Blinders'. The audio was clear even at higher levels.

There is also Sony’s LIVE SOUND feature on this speaker which claims to offer a three-dimensional sound experience. It gives you a chance to experiment with the audio output but doesn't seem of much use. Since the speaker throws the audio from different angles in this mode, the audio output is actually reduced. 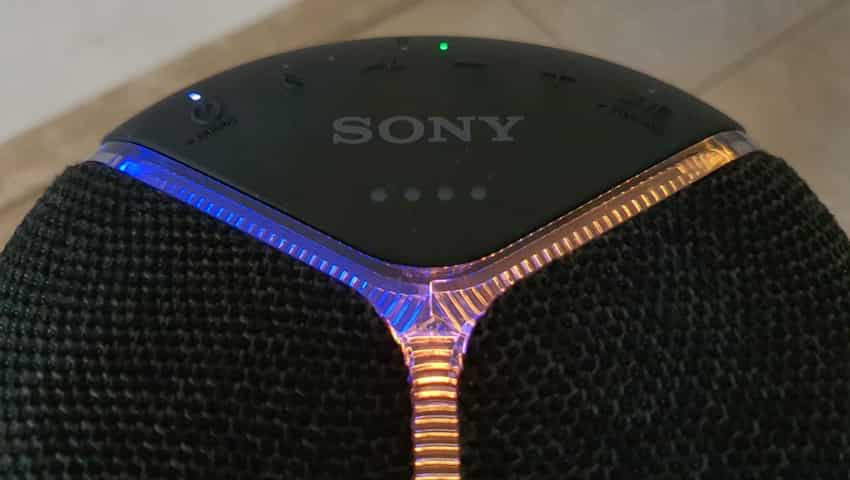 The speaker also works with Spotify but for this you need to open the app and play songs from there.

Sony claims that the SRS-XB402M could work for around 12 hours on a single charge and even on high usage, I was able to get 10 hours of performance from it. This could be one of the biggest reasons for you to but this device as most Alexa enabled speakers do not come with a battery.

VERDICT: Is it worth your money?

If you will go to a store and check out the Sony SRS-XB402M, you will definitely want to buy it and the only thing that would possibly stop you from doing that is its price tag. At Rs 19,990, this isn't the most affordable speaker available in the market. In fact, Sony had originally priced it at Rs 24,990, only to offer a Rs 5,000 discount.

But, take it from someone who has been using Harmon Kardon HK Oynx Studio for almost two years now, that Sony SRS-XB402M could be worth every penny you spend on it, if used properly. With in-built Alexa that doesn't require wires to work, it is probably one of the best smart speakers available in India right now.